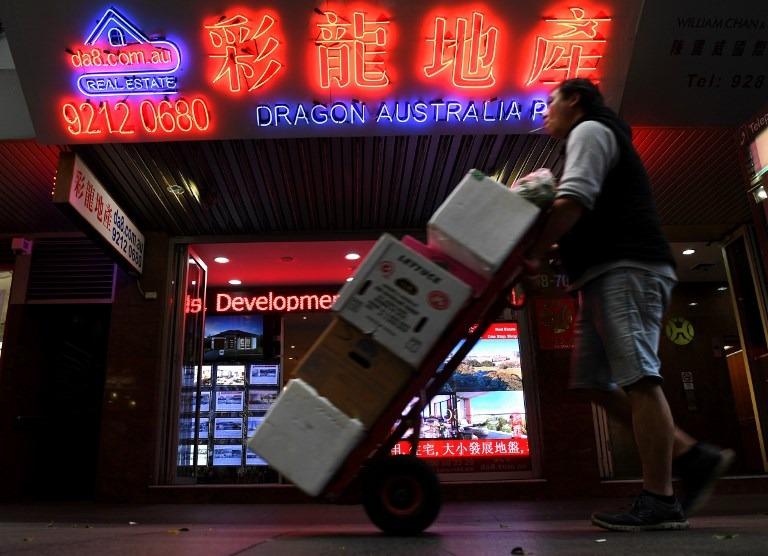 A worker walks past neon signage to a real estate company as he makes a delivery in Sydney's Chinatown on June 21, 2017. (WILLIAM WEST / AFP)

SYDNEY — Chinese visa holders make up 26 percent of temporary migrant worker abuse cases in Australia, according to findings released on Tuesday by the University of Sydney (UoS).

When asked why Chinese workers are overrepresented in the database, Boucher speculated that it may come down to English language ability, as well as occupying lower paid positions which are more likely to be exploited

"Temporary migrant workers represent up to 11 percent of the Australian labor market but, so far, little has been done to document the nature of reported abuse in their everyday lived experiences," Boucher told Xinhua.

Boucher ended up with a database of 173 court cases, ranging across 20 years which she then coded by factors such as ethnicity, salary, industry sector, type of violation and so on.

She found that while migrants from China make up only 6.5 percent of temporary visa holders overall, within her database they represented 26 percent of abuse complainants.

When asked why Chinese workers are overrepresented in the database, Boucher speculated that it may come down to English language ability, as well as occupying lower paid positions which are more likely to be exploited.

Co-ethnic exploitation could also be behind the disproportionately high rates of abuse, with migrant employees taking advantage of their more recently arrived fellow nationals due to varying expectations of workplace rights and pay rates, which are relatively high in Australia.

The leading forms of abuse were underpayment, at 37 percent of cases, and unfair dismissal, which comprised 15 percent of complaints, although sexual abuse, sexual and racial discrimination, and even one case of trafficking were also present in the case files.

Boucher explained that also of concern are the cases which don't get brought to the attention of authorities because migrants either don't know what their rights are, or are afraid of reprisals.

"Obviously what's happening is that not all migrants are bringing action," Boucher said.

"It's important to remember that some migrants on temporary visas are concerned about retribution, or maybe deportation if they bring action, so I see this as kind of the tip of the iceberg."

One solution that Boucher offered was for governments to loosen visa requirements to avoid employees using them to pressure workers, although Boucher believes that exploitation could be a somewhat unavoidable by-product of temporary immigration.

"As soon as you bring your people on differential status, my feeling is there's always going to be some degree of exploitation," Boucher said.

"And maybe it's not just the role of government, but also things like representation through trade unions or other kinds of workers groups to make sure that these people's rights are protected adequately."