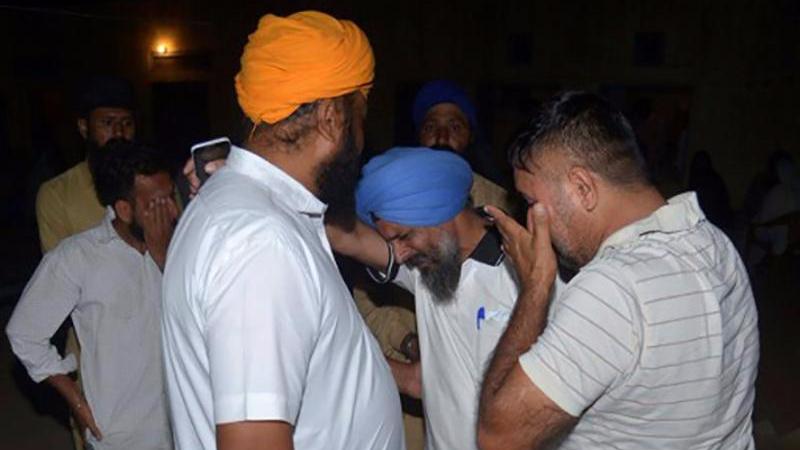 Ranjit Singh (second from left), brother of Indian army soldier Paramjeet Singh, cries at his family's residence in Vein Pein village, some 45 km from Amritsar, on May 1, 2017. Pakistani forces killed two Indian soldiers Paramjeet Singh, Naib Subedar and mutilated their bodies along the Line of Control in the morning of May 1, 2017, the army’s Northern Command said. (Narinder Nanu / AFP)

ISLAMABAD - Pakistan and Indian military officials have talked over a hotline to reduce tensions a day after India alleged that Pakistani military mutilated bodies of its two soldiers, the military said Tuesday.

Indian officials claimed two soldiers were killed and "mutilated" in Kashmir in "unprovoked firing" by Pakistani forces at Krishna Ghati sector along the Line of Control (LoC) on Monday.

However, the Pakistan army rejected the Indian military assertions as false.

"The Indian counterpart was told that there has been no CFV (ceasefire violation) from Pakistan side nor mutilation of Indian soldiers bodies," a statement from the army's Inter-Services Public Relations said.

The statement said the Indian authorities were told that there is "unnecessary media hype" following the allegations.

"Pakistan remains fully committed to maintain peace and tranquility along the LoC and expects same from other side and hopes prudence is exercised and no steps are taken that may lead to vitiating of environment and affect peace along LoC," the statement said.

The development came at a time when tension rose over the death sentence awarded to an alleged Indian intelligence officer Kulbhushan Yadav over espionage last month.

Pakistan has insisted Yadav, who was arrested last year in Balochistan province, is an operative of the Indian intelligence agency.