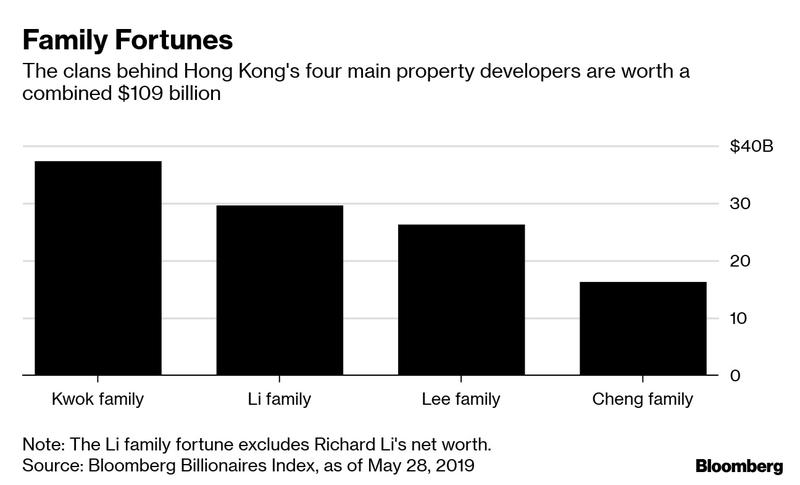 The last of Hong Kong’s "Big Four" property dynasties is handing over the reins to a younger generation, completing a flood of successions at family empires worth US$109 billion.

Lee Shau-kee, the city’s second-richest man, announced his plans to step down as chairman of Henderson Land Development Co Tuesday. He’ll be succeeded by his two sons. Lee’s retirement comes one year after Victor Li, son of Hong Kong’s richest man Li Ka-shing, took over the chairmanship of CK Hutchison Holdings Ltd and CK Asset Holdings Ltd from his father.

Lee, who will still advise his sons on major matters, said elder son Peter will focus on Henderson’s Chinese mainland business while younger son Martin will take care of the Hong Kong assets. The scions have been involved in the company since as early as the 1980s, which Lee said made him confident in passing on the baton.

“For years I have stayed behind the scene and let them run the show. They have done very well with full marks. I am confident to pass them the baton,” the 91-year-old said in an exclusive interview with Bloomberg. “They have different personalities. Peter is flexible and Martin is practical.”

Hong Kong’s Cheng family of New World Development Co had a similar transition in 2012. The Kwok family of Sun Hung Kai Properties Ltd fame was forced to deal with succession issues early on after the passing of patriarch Kwok Tak-seng due to a heart attack in 1990. Afterwards, his three sons jointly managed the company, although that led to a falling out in which the eldest, Walter, was ousted from the company and the second son, Thomas, ended up serving time in jail for corruption. Walter died in October, while Thomas was released from prison in March.

The Lee family has been planning its succession for decades and so the patriarch’s retirement is likely to be followed by a smooth transition, said Jeff Yau, a Hong Kong-based analyst at DBS Group Holdings Ltd.

“They have a professional management team which has taken care of the business for over 30 years,” Yau said. He added that Henderson has stable revenue streams and said he expects the management team will keep on optimizing the portfolio.

Lee is known as a man who cherishes family connections and adheres to old-school Chinese traditions. In his interview with Bloomberg, the advice he shelled out varied based on gender.

ALSO READ: Billionaire Lee on Hong Kong's youth to property and his legacy

“It is advisable for men not to choose a wrong profession,” he said. Women, meanwhile, “need to be wise in choosing their husbands.”

He was known to pay bonuses to Henderson employees to celebrate the births of some of his 11 grandchildren. In a controversial move, his unmarried son Peter made sure the patriarch had as many successors as possible -- by having triplet boys through a US surrogate mother in 2010.

A devout Buddhist who never married, Peter stands in sharp contrast to Martin, whose partner is a former actress and model. He threw a lavish celebrity-studded wedding in Sydney in 2006.

“Lee Shau-kee is your typical Hong Kong oligarch,” said Joe Studwell, the author of ‘Asian Godfathers: Money and Power in Hong Kong and Southeast Asia’. “Sold as a self-made entrepreneur, but in reality a man who came from wealth -- his father was a successful banker and gold trader.”

There is no linear relationship between getting rich and buying property. Do not let a property limit your dream

Lee Shau-kee, the son of a gold trader in Guangdong, immigrated to Hong Kong as a young man after World War II with only a few yuan to his name. He remembers the old days nostalgically, including starting a business as one of the “three musketeers” alongside Kwok Tak-seng and Fung King-hey. After the trio co-founded Sun Hung Kai -- now the city’s biggest developer -- Lee left in 1973 to start Henderson Land.

Henderson has grown from its listing in 1981 to a behemoth with a US$27.5 billion market capitalization. In his retirement, Lee said he looks forward to spending more time with his family life and on his charity work.

He was an outspoken critic of Hong Kong’s 2014 illegal “Occupy” protest and once said the territory’s debate over independence was “outrageous.” Henderson has a significant portion of its land bank in Chinese mainland, according to its 2018 annual report.

Having made a vast fortune from real estate -- his net worth is around US$26.3 billion according to the Bloomberg Billionaires Index -- Lee in his later years expressed concern about Hong Kong’s growing housing problem. He has helped to build modular housing and donated land for elderly care homes and youth hostels.

In his interview with Bloomberg, he even advised younger generations not to focus too much on acquiring property.

“There is no linear relationship between getting rich and buying property. Do not let a property limit your dream,” he said.

It’s safe to say his two sons, as they settle into their roles managing one of the world’s biggest real estate empires, won’t have to heed that advice.