China and India can fight poverty together 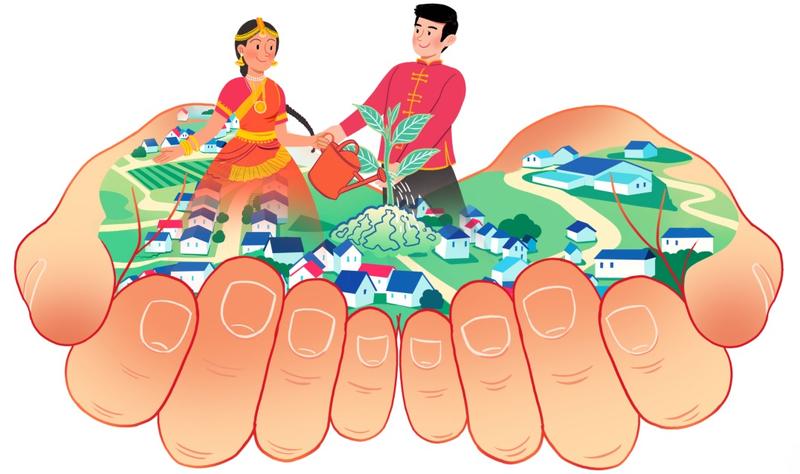 In light of the white paper, China and the World in the New Era, published by the Chinese government to respond to the world's questions about China, and in anticipation of the upcoming summit between Chinese President Xi Jinping and Indian Prime Minister Narendra Modi, it is appropriate to reflect on the nature of Sino-Indian relations.

As the 21st century unfolds, bilateral relations between China and India, the two most populous countries and two ancient civilizations, will become increasingly axial, for the global community as well as for the two nations themselves. As the first half of the century is defined by Sino-US relations, the second half may be defined by Sino-Indian relations. Global prosperity, even global peace, will grow progressively dependent on China and India and on how well they cooperate.

But the focus should be on how China and India can cooperate, leveraging each other's strengths and experiences. To begin, both have strikingly similar strategic visions, short-term for the 2020s and long-term for mid-century

It betrays no state secrets to acknowledge sharp differences between China and India, especially on long-standing border issues, trade issues and the complex geopolitics of the region. But the focus should be on how China and India can cooperate, leveraging each other's strengths and experiences. To begin, both have strikingly similar strategic visions, short-term for the 2020s and long-term for mid-century.

For China, it is the "two centenary goals": realizing a "moderately prosperous society" by 2020, at the 100th anniversary of the founding of the Communist Party of China (2021); and a fully modernized socialist country by 2050, at the 100th anniversary of New China (2049), a country that is prosperous, strong, democratic, culturally advanced, harmonious, and beautiful.

For India, it is "New India 2022", at the 75th anniversary of India's Independence, an inclusive society that is clean, healthy, educated, wealthy, capable and safe; and "Grand India 2047" (Sarvashrestha Bharat 2047), at the 100th anniversary, a fully developed nation and a world power.

In both grand national visions, a core driver is poverty alleviation, and it is this explicit commonality that can catalyze China and India working together for the common good.

First, how does poverty alleviation work in each country?

A fundamental facilitator of China's remarkable poverty alleviation success has been infrastructure: the largest construction of public works in human history. The Chinese saying,"If you want to get rich, first build a road" is much repeated.

Modi focuses on the poor:"A new India where the poor do not want anything by way of charity, but seek opportunity to chart out their own course... Indians today are not waiting for governmental sops. They only want opportunities to be created for them, so that they can work for their livelihood and prosperity."

As for China's anti-poverty campaign, I know it first-hand. For several years I have been traveling the country, embedded in poverty alleviation programs.

In the early decades of reform, Chinese leaders focused on economic growth, which, as a natural consequence, lifted hundreds of millions of Chinese out of poverty. But in recent years, intensifying after 2012 when Xi Jinping became top leader, the realization set in that there were about 100 million Chinese who were intractably poor. Whether because of geographic isolation in remote mountain villages or because they didn't have adequate healthcare or education, or because they were old or infirm, economic development alone would never be sufficient: no matter how much China's economy would grow, no matter how large China's GDP per capita would become, these intractably poor would remain intractably poor.

In 2013 President Xi proposed the concept of "targeted" or "precision" poverty alleviation."Targeted" means individualized attention, customized plans and programs to bring each poor family out of poverty."We should mobilize the energies of our whole Party, our whole country, and our whole society," Xi said.

The success of China's targeted poverty alleviation campaign, bringing 10 to 14 million people per year out of absolute poverty, depends on strict, quantitative and transparent procedures. It starts by defining absolute poverty with standardized methods, using annual income, but also including tests of adequate healthcare, education, and even sanitation, like flush toilets.

Five methods of poverty alleviation are employed: industry, creating sustainable micro-businesses; relocation, moving people from remote areas; education and training; ecological compensation for those living in environmentally vulnerable areas; and social security, medical subsidies and direct payments to those who cannot work. Every impoverished household is guaranteed help and every village has designated officials to carry out targeted measures.

Over the years, I have visited all parts of China, including the poorest- which is why, as much as I thought I knew China, I was surprised by what I found.

I found that every poor family has its own file, a literal notebook, each with its own targeted plan to lift each above the line of absolute poverty- that's millions of poor families with customized plans, each monitored regularly and reported centrally. I witnessed a "democratic evaluation" in a remote village, where villagers voted into poverty status one young man whose father had cancer, and cheered when another was raised out of poverty status.

Equally startling, Party cadres are dispatched to impoverished villages to manage poverty alleviation full time, often for two years. Party officials fighting poverty cannot be promoted unless and until they fulfill their specific, numeric poverty alleviation goals. Officials know that their careers prosper or falter based on results. I watched local officials being held accountable.

With career stakes high and funding vast, cheating and stealing should be no surprise. Of the 122,100 cases of corruption China reported in 2017, 48,700- more than one-third- related to poverty alleviation. Credit the government for releasing such unflattering statistics. China will not allow the falsifying of data, or the misappropriating of funds, to undermine its poverty alleviation goals.

When 2019 began, the number of those still living in absolute poverty was down to 16.6 million; though lifting the last will be the hardest, China is on track to eliminate all absolute poverty by 2020.

So, what would it take for China and India, working together, sharing experiences, to unite to fight poverty, surely a global priority?

It would take mutual commitment between President Xi and Prime Minister Modi. To catalyze it, how about proposing parallel "Poverty Alleviation Institutes" in Beijing and New Delhi? Each would have three synergistic purposes:

First, facilitating reciprocal exchanges of poverty alleviation procedures, programs and experiences between China and India in both directions.

Second, prioritizing digitization in poverty alleviation, such as telemedicine and education over the Internet.

Third, enabling China and India to cooperate in poverty alleviation in other developing countries, synthesizing their mutual procedures, programs and experiences.

President Xi says,"China is moving to center stage of the world."

Prime Minister Modi says,"If we are successful, no one can stop India from becoming a world power."

China states that Chinese wisdom and Chinese experience can provide a new way for developing countries to achieve modernization and for solving problems facing mankind.

India states that its unique development experience- economic, political and social transitions- can become a model for the world.

Conventional wisdom has China and India as natural competitors. Fighting poverty has them as natural allies.

The author is a China Reform Friendship Medal winner and the author of How China's Leaders Think.