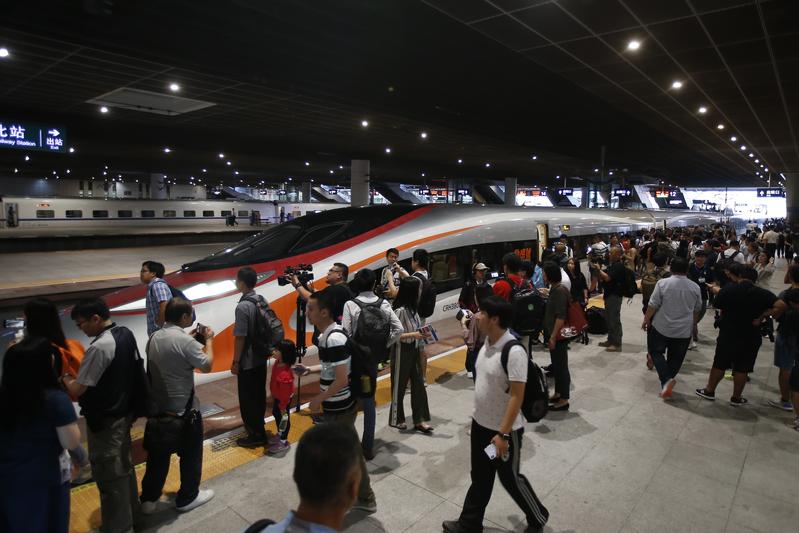 Passengers take a moment at Shenzhen North Station to appreciate their journey on board the first Vibrant Express train from Hong Kong to Shenzhen, Guangdong province, which arrived on time at 7:19 am, Sept 23, 2018. (ROY LIU / CHINA DAILY)

HONG KONG - The newly-launched high-speed rail between the mainland and Hong Kong has recorded about 880,000 passenger trips since put into use two weeks ago, the rail service operator MTR Corporation said on Sunday.

Since the commencement of its service on Sept 23, the Hong Kong Section of Guangzhou-Shenzhen-Hong Kong Express Rail Link has witnessed about 880,000 passenger trips to and from Hong Kong West Kowloon Station and train service operations have been smooth, MTR said in a press released on Sunday night.

During the period from Sept 28 to Oct 7, the high-speed rail served a total of around 650,000 passenger journeys between Hong Kong and different cities in the Chinese mainland

During the National Day and related holiday period alone, namely from Sept 28 to Oct 7, the high-speed rail served a total of around 650,000 passenger journeys between Hong Kong and different cities in the Chinese mainland.

The cumulative number of tickets sold, including those sold in the pre-sale period, has exceeded 1 million.

The cross-boundary high-speed rail connects Hong Kong with 44 stations in the Chinese mainland without interchange, including six short-haul stations and 38 long-haul stations.

The National Day holiday came shortly after the opening of the high-speed rail and was a great challenge to the new railway, MTR Operations Director Adi Lau said, adding that MTR set up a special task force operating every day during the early days of operations at Hong Kong West Kowloon Station to respond immediately to different issues, including optimizing passenger flow management and queuing arrangements.

"As we are still in the early days of operations, there may still be teething issues which may cause some inconvenience to passengers. We will continue to listen to passengers' views and seek continuous improvements. Our aim is to provide passengers with high quality high-speed rail service," said Lau.