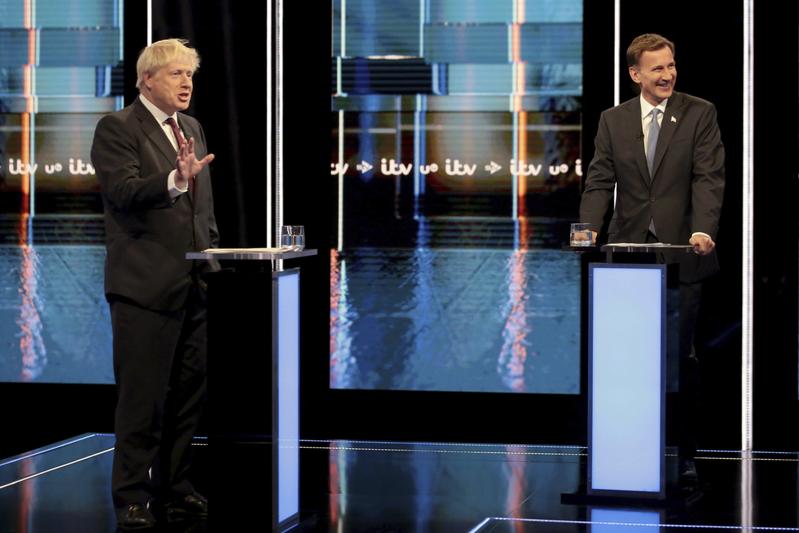 LONDON — The two men vying to be Britain's next leader traded verbal blows in a televised debate Tuesday about who is more likely to break the country's Brexit deadlock and lead the UK out of the European Union.

About 160,000 Conservative Party members are voting for a successor to Prime Minister Theresa May, who announced her resignation last month after failing repeatedly to get Parliament to back her divorce deal with the EU.

The two finalists, Boris Johnson and Jeremy Hunt, both used their only televised debate to argue that they were best placed to negotiate Britain's twice-postponed exit, currently scheduled for Oct 31.

I'll be your prime minister whoever you vote for

Johnson, a populist former mayor of London whom polls suggest is the strong front-runner, argued that Britain leaving on schedule, with or without a divorce deal, is a "do or die" issue.

"Delay does not deliver a deal. A deadline will deliver a deal," Johnson said, adding that his "energy and optimism" would help Britain "get back our mojo."

Hunt, a long-serving but lusterless senior minister who is currently foreign secretary, said he offered experience, realism and a broader appeal than the divisive Johnson.

"I'll be your prime minister whoever you vote for," he said.

Unlike Johnson, Hunt said he would be prepared to delay Brexit for a short time in order to strike a deal with the EU.

That led Johnson to call Hunt "defeatist." Hunt accused Johnson of setting a "fake deadline" and asked whether he would resign if he failed to deliver on his promise to leave by Oct 31.

Johnson did not answer.

Hunt and Johnson have both vowed to succeed where May failed and take Britain out of the EU — even if that means leaving without an agreement on divorce terms and future relations.

Most businesses and economists think a no-deal Brexit would plunge Britain into recession as customs checks take effect at UK ports and tariffs are imposed on trade between the UK and the EU. But many Conservatives think embracing a no-deal Brexit may be the only way to win back voters from the upstart Brexit Party led by Nigel Farage.

Growing concern about the chance of a no-deal Brexit and signs that the British economy could be heading toward recession have weakened the pound, which fell Tuesday to US$1.2440, near a two-year low.

For underdog Hunt, Tuesday's showdown offered a chance to turn the contest around, though it may be too late. Ballot papers have already gone out, and many Conservatives have made their choice.

In the memos, Ambassador Kim Darroch called Trump's White House dysfunctional, inept and chaotic. The president let rip with tweets branding Darroch "very stupid" and "a pompous fool," and saying the administration would no longer deal with him.

Trump also renewed criticism of May's handling of Brexit. In contrast, he has spoken warmly of both Johnson and Hunt.

Hunt reprimanded Trump, saying he should not meddle in Britain's choice of ambassador.

"I have made it clear that if I am he next prime minister our ambassador in Washington stays," Hunt said.

Johnson would not commit to keeping Darroch in his post.

"I have a very good relationship with the White House," he said. "I think it's very important we should have a close partnership, a close friendship with the United States."

As the two Conservatives battled over who was the bigger champion of Brexit, Labour leader Jeremy Corbyn shifted his party's position, calling on May's successor to call a new referendum on Britain's EU membership, in which Labour would campaign to stay in the EU.

In a letter to party members, Corbyn said that the new prime minister "should have the confidence to put their deal, or no-deal, back to the people in a public vote."

"In those circumstances, I want to make it clear that Labour would campaign for Remain against either no-deal or a Tory deal that does not protect the economy and jobs," he said.

Labour's opponents — and many supporters — have accused the party of dithering over Brexit for fear of alienating voters on either side of the national divide over Europe. Until now, Corbyn, a longtime critic of the EU, had resisted calls for a second referendum, saying Labour must respect voters' 2016 decision to leave.

The left-of-center party has previously rejected May's deal but also ruled out leaving the EU without an agreement and called for an election that the party hopes will bring a Labour government to power.

But the party's poor showing in recent local and European elections suggests Labour is losing support to parties including the Liberal Democrats and the Greens that advocate remaining in the EU.

Corbyn's letter clarified the party's position — up to a point. It's still unclear what Labour would do about Brexit if it formed a government.

"We saw what a lack of clarity did to Labour in the European elections. We got 14% of the vote," he said.

But John Mann, a Labour legislator who backs Brexit, said the shift would cost the party support in areas of the country that voted strongly to leave the EU.

"There's no indication whatsoever that voters in my area ... have changed their mind," he said.