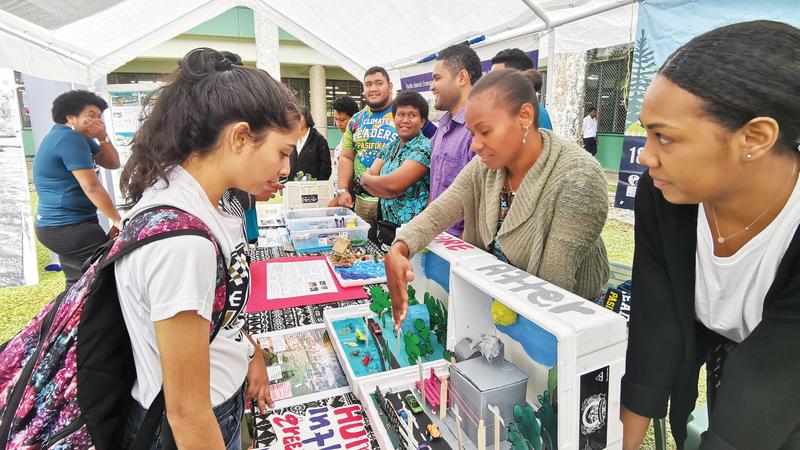 Open-day activities at the University of the South Pacific in Suva, Fiji, on July 26 help middle school students and others understand more about climate change. (ZHANG YONGXING / XINHUA)

Leaders of Pacific countries are eager to address the single dominating topic at their meeting in Tuvalu for the annual Pacific Islands Forum this week: climate change.

With a population of 11,000, the tiny Pacific island nation of Tuvalu is one of the least developed nations in the world. It is made up of nine atolls that are fast being eroded by rising sea levels.

“This region faces issues vital to our future. Our leadership role is crucial to navigate the impacts of climate change for the Blue Pacific and for the planet,” said Pacific Islands Forum Secretary-General Meg Taylor in a tweet ahead of the forum, held from Aug 13 to 16.

Enele Sopoaga, prime minister of Tuvalu, has been a key player in highlighting the impact of climate change on small island nations like his to the wider world. “Save Tuvalu, save the world” has been his slogan.

Earlier this year, Antonio Guterres, secretary-general of the United Nations, toured the Pacific to get a firsthand look at how climate change is affecting the lives of ordinary people ahead of the Climate Action Summit in New York in September. He said at the time that climate change is one of the biggest challenges facing the planet.

Australia has come under fire from several Pacific countries for its stand on climate change and its refusal to end its support for fossil fuels.

“I don’t think that will wash with the Pacific leaders who want to see real action by Australia on climate change and not just empty words,” he told China Daily.

Patrick Pringle, a research associate with Climate Analytics, a non-profit climate science and policy institute based in Berlin, also noted that climate change is already having an impact on the Pacific islands.

Atoll countries like Tuvalu, Tokelau (halfway between New Zealand and Hawaii), the Marshall Islands (between the Philippines and Hawaii) and Kiribati (Micronesia) are all highly exposed to sea level rises,” said Pringle.

Fiji’s Prime Minister Frank Bainimarama, who is making his first appearance at the forum in 10 years, said he expects much stronger action from Australia, including phasing out coal-fired power generation.

“I appeal to Australia to do everything possible to achieve a rapid transition from coal to energy sources that do not contribute to climate change,” he said at a climate change conference in Tuvalu ahead of the forum, on Aug 12.

Raijeli Nicole, regional director of Oxfam in the Pacific, said: “The climate crisis is a matter of survival for our most vulnerable nations (in the Pacific).

She said the human toll and grave injustice of the climate crisis is clear for all to see in Tuvalu.

People fear a loss of culture, of ancestral connection to their land and ocean, and even their very sovereignty should they be forced from their homes and land.

Nicole added that in the Pacific, the Australian government’s “recklessness in the face of the climate crisis — in full knowledge of its implications for our people — is hard to fathom”.

Even though Australia joined all members of the Pacific Islands Forum last year in endorsing the Boe Declaration on Regional Security, which reaffirms climate change as the single biggest threat to the livelihoods, security and well-being of the people in the Pacific, Australia’s emissions have continued to climb, and the government has approved the opening up of the Galilee coal basin (in Queensland).

“It has stated it will not make further contributions to the Green Climate Fund — a critical source of support to vulnerable communities — and has refused thus far to heed the UN secretary-general’s call for all countries to strengthen their commitments to the Paris Agreement before 2020,” Nicole said.

On Aug 13, Morrison announced a grant of A$500 million (US$338 million) over five years for Pacific island nations to invest in renewable energy and “climate and disaster resilience”.

In a statement, Morrison said the funding “highlights our commitment to not just meeting our emissions reduction obligations at home but supporting our neighbors and friends”.