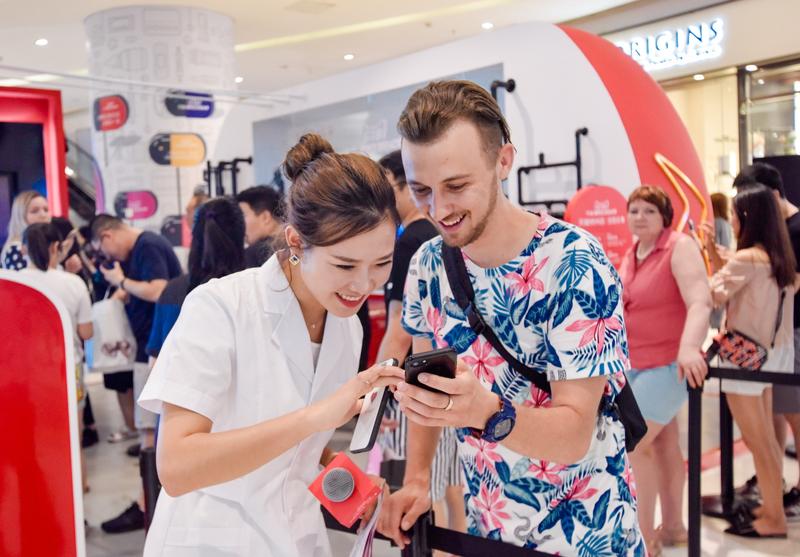 In this undated photo, a shop assistant helps a foreign buyer pay on his mobile phone at a Tmall shop in Beijing. (NIU JING/FOR CHINA DAILY)

New Retail, or the use of internet technologies to boost commerce, has become a new growth engine for the Chinese economy, according to latest economic trackers for the first half of 2018.

Local government reports have pointed to the employment of big data and cloud computing to revamp traditional retail as a solid force to bolster consumption, which accounted for 78.5 percent of GDP growth from January to June.

Alibaba Group Holding Ltd, the company behind those services, is racing to combine online and offline resources to benefit consumers and brands. It launched its inaugural Hema Supermarket in the city, which served as a prototype to merge digital and physical shopping experiences through adopting a suite of technologies to maximize operation efficiency.

Consumption gained extra momentum through a number of pop-up stores across major shopping districts in the country, through which the blend of offline experience with online discount coupons encourages spending.

In Hangzhou, capital of East China's Zhejiang province, the gross merchandise volume generated through the top three electronics marketplaces jumped 22.9 percent in the first six months, a sector that incurred losses just a year ago. Sales of top 10 supermarkets surged 10.6 percent, up 4.2 percentage point from a year ago.

A local government report detailing economic performance in the first half attributed such growth to "the merging of online and offline powered by New Retail".

The local authorities in Guangzhou also highlighted innovative business endeavors to rejuvenate offline shopping, such as the introduction of a car vending machine that makes car-purchasing possible through a few taps on the phone, as well as the Super Species seafood chain that facilitates mobile payment and online-to-offline shopping.

"In the past two decades, China was largely reliant on the conventional GDP-driven path," he said. "Now the government and the public are looking forward to a change of economic drivers that will put the country on a different track and a fast lane amid economic transition."

New Retail is able to meet the changing mentality of the Chinese from planned consumption to spontaneous consumption, which would consequently upgrade other cycles of commerce, such as logistics and production, said Cheng Wenqiang, a researcher at Development and Research Center of the State Post Bureau.