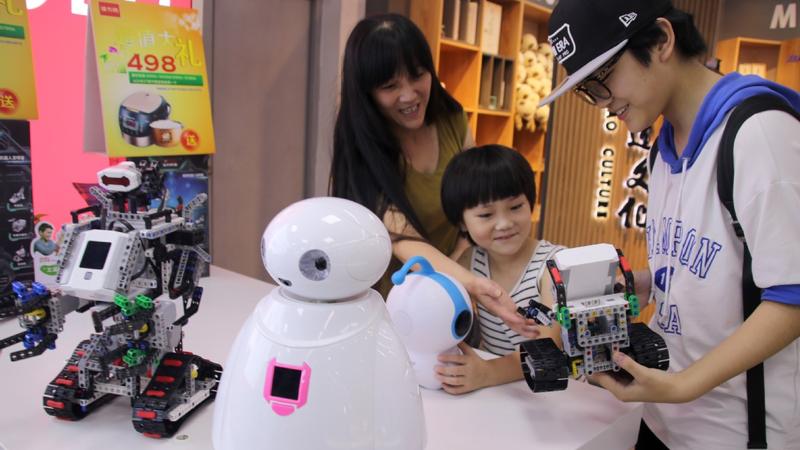 A consumer buys an intelligent education robot at a shop in Suzhou, Jiangsu province. (WANG JIANKANG / FOR CHINA DAILY)

BEIJING - China's consumer prices in September remained within the annual target of around 3 percent, with more stabilizing macroeconomic measures to take effect in the near future.

The country's consumer price index (CPI), a main gauge of inflation, rose 3 percent year on year in September, up from 2.8 percent in August and representing the highest growth this year, the National Bureau of Statistics said Tuesday.

The average growth rate in the first nine months of this year came in at 2.5 percent, well within the around 3-percent range set by the government.

Due to a shortage of supply, prices of the staple meat pork were one of the main drivers of the CPI uptick, while the growth rate narrowed on a month-on-month basis to 19.7 percent in September, said NBS senior statistician Shen Yun

Food prices grew 11.2 percent year on year last month, up from 10 percent in August while non-food prices gained 1 percent, 0.1 percentage points lower than that of August.

Due to a shortage of supply, prices of the staple meat pork were one of the main drivers of the CPI uptick, while the growth rate narrowed on a month-on-month basis to 19.7 percent in September, said NBS senior statistician Shen Yun.

Although pork may continue to drive up food prices and the CPI in the fourth quarter, stabilizing measures issued by the government will eventually render supply-demand balance in the market, according to Lian Ping, chief economist at the Bank of Communications.

China has repeatedly pledged to spur hog production and stabilize pork supply. A total of 30,000 tonnes of pork was released from the national stockpile last month after an outbreak of African swine fever dented the staple meat's market supply.

The country imported 1.33 million tonnes of pork in the first nine months, up 43.6 percent year on year, as another way to shore up supply.

Pork price hikes spilled over to beef, lamb and poultry, while vegetable and fruit prices both dropped from the previous month.

ALSO READ: Inflation rate expected to tick up in China

Keeping consumer prices stable is high on the government agenda, as the State Council urged efforts in an executive meeting on Sept 26 to secure the supply of basic necessities, track and analyze the trend of commodity prices in the international market, and strengthen market supervision and price monitoring.

The producer price index, which measures costs for goods at the factory gate, fell 1.2 percent year on year in September.

The reading expanded from the 0.8-percent decline in August, the NBS data showed.

On a monthly basis, the PPI rose 0.1 percent last month, bucking the trend of the 0.1-percent drop in August, according to the NBS.

In the first nine months, the PPI on average was unchanged from that in the same period of last year.

Factory prices of production materials decreased 2 percent year on year in September, expanding from the 1.3-percent decline in August.

Among major industries, oil and natural gas extraction saw faster price drops in September, declining 13.4 percent year on year, according to the NBS.

NBS senior statistician Shen Yun said the carryover effect of last year resulted in a drop of 0.7 percentage points in the PPI decline in September, while new factors dragged down the index by 0.5 percentage points.