Authorities crack down on pollution off China's Florida 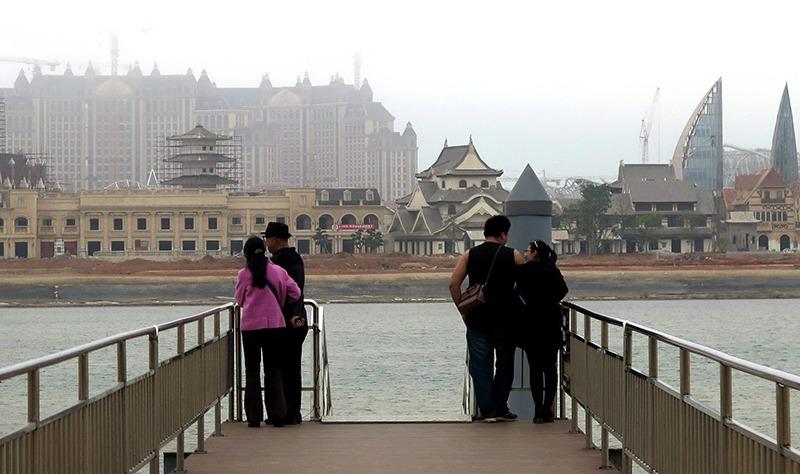 On Monday morning, Wang Lan stood on a beach in Danzhou, Hainan province, looking across the ocean at an artificial island about 600 meters offshore.

The structure, formed from three smaller interlinked islands, was dotted with half-built villas, hotels, amusement parks and apartment blocks. Construction work began three years ago and the development, which covers 7.83 square kilometers, is rapidly assuming its planned shape of a flower decked with two leaves.

In 2016, Wang, 60, from Urumqi, Xinjiang Uygur autonomous region, bought an apartment in the development, called Ocean Flower Island. This week, she visited Hainan to see how the project, developed by the Evergrande Group, with investment of 160 billion yuan (US$24.5 billion), was faring.

In December, construction was suspended after the Central Environmental Inspection Team visited Hainan and reported that the project had resulted in widespread damage to coral reefs and colonies of whitelip oysters, listed as a second-level protected species in China.

"The sales office for the island is temporally closed and none of the cranes seem to be moving," Wang said, sounding disappointed, her eyes slowly scanning left and right.

People in Hainan, China's most southerly province, and further afield were shocked to learn that the developers had failed to obtain the correct construction permits, even though the provincial government listed Ocean Flower Island as a lead project to boost tourism in western Hainan between 2011 and 2015.

The inspection team discovered that the Danzhou government had helped Evergrande, China's second-largest property developer by sales, obtain permission to build the structure by describing the massive project simply as the construction of a series of small islands, which meant it was not necessary to obtain approval from higher authorities.

Ocean Flower Island is one of several real estate developments in Hainan that are subject to a "double suspension" - of construction and sales - as the provincial government attempts to resolve the issues raised by the inspection team.

"I'm not too concerned. They (the provincial government) will simply fine Evergrande, and construction will continue. The island and the buildings have already been built. What else can they do? It's too late," said Wang, the property owner from Urumqi.

A construction worker, who declined to be named, said: "No workers are allowed on the island now because a work group is spending nine more days there deciding what to do next. All I know is that the construction waste has caused severe environment damage."

Hainan's tropical climate means the island has long been a desirable destination for wealthy people, who buy second homes to escape the harsh winters in North China, breathe clearer air and enjoy life by the sea.

The apartment on Ocean Flower Island is the eighth property Wang's family has bought in Hainan.

Like many real estate speculators from other parts of China, Wang said she is only interested in how quickly the value of her property will rise.

"It never crosses my mind to ask about the environmental impact. What is a whitelip oyster, anyway?" she said.

Most of the severe environmental damage mentioned in the inspection report is linked to the development of real estate and tourism.

"In some of Hainan's counties and cities, finances have been heavily reliant on property growth, so governments' urban planning policies have often accommodated inappropriate property developments," said Jia Zhibang, head of the central inspection team, adding that the practice boosted revenues but damaged the environment.

Chen Hong, director of the Hainan South China Sea Institute of Tropical Oceanography in Sanya, in the south of the island, said: "I often wonder how diners at the Sea Pavilion Restaurant would have felt if they had known they were eating their meals on the graveyard of the coral reefs." 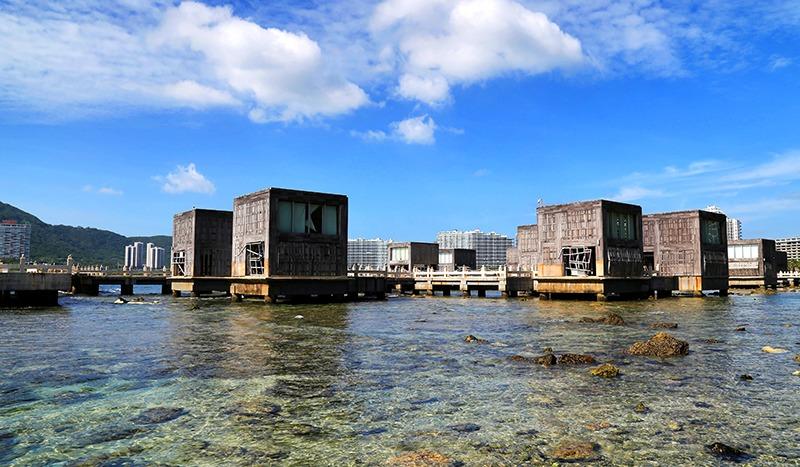 The Sea Pavilion Restaurant was built inside a nature reserve. (YAN ZHIHONG / FOR CHINA DAILY)

Construction of the restaurant, about 100 meters offshore in Dadonghai Bay in Sanya, was completed in May 2011. It was not subject to environmental evaluation, despite being built within the boundaries of the Sanya Coral Reef National Nature Reserve, founded in 1990.

The restaurant, covering 805 square meters, was a key attraction of the five-star Intercontinental Hotel on the shore.

"The corrosive effect of the sea water peeled concrete from the foundations and the waves carried it to other parts of the reserve, covering the coral and killing many marine creatures that are extremely sensitive to their environment," Chen said.

According to the inspection report, human activity has resulted in coral coverage in the waters of Dadonghai Bay, near the Luhuitou Peninsula, falling from 42 percent in 2013 to 20 percent in 2016.

The Sanya government has started demolishing the Sea Pavilion and the illegal construction is expected to be fully removed by May.

Sanya is known as China's Florida; the population booms in the winter as people migrate temporarily from other parts of the country to escape the cold.

That has led to a surge in demand for holiday homes, so Sanya's streets are packed with real estate agencies offering viewings 24/7. The city has long been a key battleground for property developers, who fight to place their projects as close to the ocean as possible.

Although people assume that the coral reserve is entirely underwater that isn't the case, according to Chen. To minimize the impact of human activity, part of the reserve covers Sanya's coastline.

"The odd thing is that the reserve's administrators don't really have any say about the operation of the land-based part of the reserve, but real estate developers do," he said.

The central inspection team stated that the Sanya government not only backed the construction of a resort within the reserve's boundaries on the Luhuitou Peninsula, but it also interfered with law enforcement activities several times between 2012 and 2015.

Additionally, it illegally issued a construction permit to the resort's developers in 2016, only to withdraw it when the inspectors arrived, according to the report.

The pursuit of economic growth is the main reason some local governments in Hainan have offered real estate developers almost unconditional support, according to Qin Tianbao, director of the Research Institute of Environmental Law at Wuhan University in Hubei province.

"For decades, GDP has been the most important indicator for decision-makers because it is closely linked with their performance and promotion. Therefore, it guides the direction of policies and development plans in cities and counties," he said. 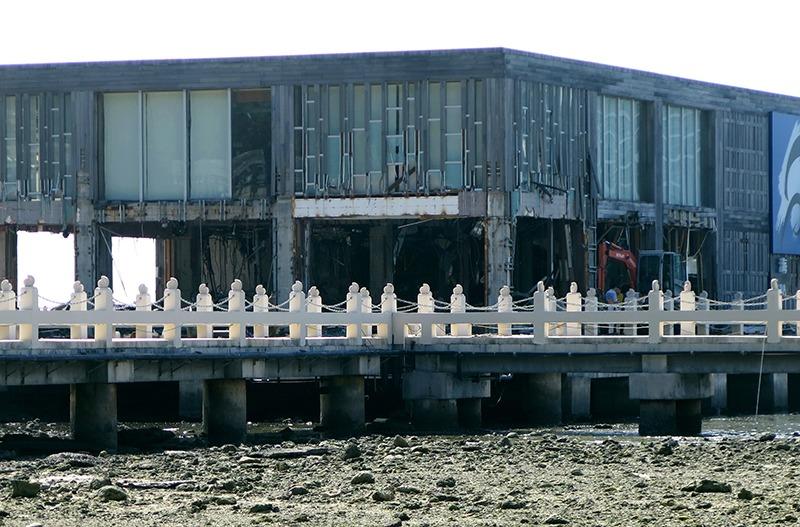 "People often say the property developers have kidnapped local governments. Well, maybe they lured the authorities with the promise of gains, but the governments made the final decisions, so both parties must be held responsible for what has happened in Hainan," he said.

"The environment is Hainan's lifeline and goldmine. The government should really recognize that rather than simply paying lip-service. The inspection has been a wakeup call for the property developers and the local governments. I believe they will be very cautious from now on after learning how serious the central government is when it comes to environmental protection."

Zhang Guiren, senior manager of the Shunxin Property Agency in Qionghai, a city in the eastern part of Hainan, hopes the inspection will help the island's property market to return to rational levels.

"The island's housing market has experienced volatility in the past decade as a result of speculation, and the market for luxury homes on the coast is mainly driven by speculators."

On a positive note, Chen, of the oceanography institute, said he has witnessed a sea change in official and public attitudes toward environmental protection in the past five years.

"If the developer of Sanya's Phoenix Island, the first phase of which opened 18 years ago, proposed building a large artificial island with hotels and a cruise liner port on the coral reefs now, the project would not be approved," he said.

"People would definitely report activities that damage the environment to the higher authorities, who can't afford to turn a blind eye anymore," he added.

Construction of Phoenix Island affected the currents, resulting in sand being washed from beaches on the west side of Sanya Bay, and the local government had to spend a lot to restore them by bringing in sand from outside.

Meanwhile, development of the second phase of the island was halted temporarily after the inspection team discovered it was larger than planned and would feature residential properties, even though the original proposal only referred to construction of a new port.

"Following the inspection, the hotels were ordered to lay pipelines to direct cooking fumes away from the sea. Now every speck of pollution is a big deal," said a property manager on Phoenix Island, who would only give his surname as Li.

Chen and his team from the oceanography institute have been planting coral around Phoenix Island since 2011. The largest section has grown from the size of a fingernail to a height of 70 centimeters.

"Coral is the rainforest of the sea. It is crucial for sustaining marine life. It is easy for humans to harm the environment, but we are also capable of helping it to recover," he said.

He urged the Sanya government to give more thought about how to deal with illegal constructions such as the Sea Pavilion Restaurant rather than simply demolishing them, because demolition may damage the environment a second time.

In the wake of the inspection, the Sanya government asked Chen to draft a plan to restore the coral reefs, and he will introduce 840,000 coral polyps by the end of the year.

Qin, from Wuhan University, said: "China is working to build a long-term environmental protection mechanism, such as amending and redrafting laws, issuing new laws and regulations, and comprehensive measures."

In addition to tough regulations and inspections, the public should be encouraged to participate in a national campaign and suggest policies.

"That would help supervision and play a role in making the policies scientific, he said, adding that if pollution occurs, the public and NGOs should have easy access to public interest litigation, which would force companies to behave properly.

Wang Lu, from the Jincheng Consultancy, said the elimination of the environmental threat caused by real estate development in Hainan is a simple matter.

"All the real estate developers and local governments need to do is follow the regulations and laws instead of thinking about how to bypass them to maximize short-term profit," he said.

As a result of the crisis caused by the pollution scandal, the fate of Ocean Flower Island is uncertain.

"One thing is sure - there won't be another project like this in Hainan or any part of China again," said Wang Lan, the property speculator from the Xinjiang Uygur autonomous region.

Zheng Jinran and Wu Yiyao contributed to this story.