US expert calls for ‘courage’ to build stronger US-China ties 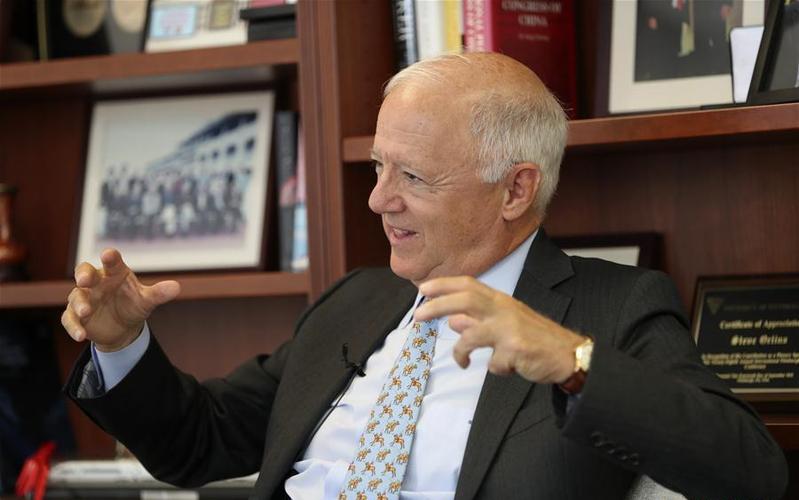 Photo taken on April 14, 2017 shows Stephen A Orlins, president of the National Committee on US-China Relations (NCUSCR), speaks during an interview with Xinhua at his office in New York City. Orlins has called for "courage" to build a stronger US-China relationship. (WANG YING / XINHUA)

NEW YORK – President of the National Committee on US-China Relations (NCUSCR) Stephen A Orlins has called for "courage" to build a stronger US-China relationship ahead of the 40th anniversary of the establishment of the bilateral ties.

Noting that relations between the world's two largest economies are now experiencing a difficult time, Orlins reiterated at a Saturday forum a motto he learnt from China: "In times of trouble, look at your record, look at the bright side, and pluck up your courage."

Stephen A Orlins lamented that some people fail to realize the benefits that policies of constructive engagement with China have generated, cautioning the trend is "deeply troubling"

During the event celebrating 40 years of US-China relations, he urged an audience of dozens of business leaders and politicians to "participate in this struggle," which needs "not only courage from our leaders," but also "from every single one of you."

Orlins was among the earliest to witness the establishment of the US-China diplomatic relationship in January 1979, which he said has brought enormous benefits to both countries.

Starting as a "small potato," as he referred to his being a member of the legal advisers' office at the US Department of State about 41 years ago, Orlins said he was "fortunate" to get involved in the US administration's work toward the establishment of the ties between the US and China.

"President (Richard) Nixon, Secretary (Henry) Kissinger had laid the foundation, but it took my boss President (Jimmy) Carter to show the courage to deal with the domestic opposition ..." he said. "We established a framework that allowed peace to flourish in Asia and then economic development flourished."

He lamented that now some people, in think tanks, the government and the academic circle, fail to realize the benefits that policies of constructive engagement with China have generated, cautioning the trend is "deeply troubling."

The NCUSCR president was joined by many at the forum in recognizing the benefits from the development of US-China relations.

Ore A Jacinto, director of finance with the New York Republican State Committee, recalled that Nixon understood the US-China relationship was to be of the utmost importance for peace and prosperity in the world. "A strong and prosperous China creates economic benefits not just for itself but for all nations, including the United States," he said.

CUCFA President Chow Kongshankwan said his organization also plans to hold a forum on the Belt and Road Initiative to mark the 40th anniversary of the establishment of US-China relations as well as to promote ideas for a better future for the two countries.