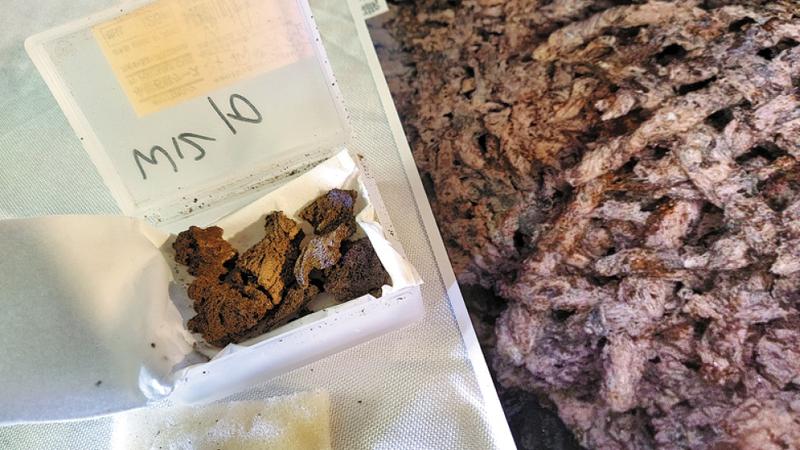 Relics found in Xingyang, a county-level city in Zhengzhou, Henan province, help to identify what is believed to be the world's oldest silk fabric. (PHOTO PROVIDED TO CHINA DAILY)

ZHENGZHOU－Chinese archaeologists have used new technology to ascertain whether the remnants of carbonized textiles found in a burial urn unearthed at the Neolithic Yangshao Culture ruins in Central China's Henan province are the remains of the world's earliest known silk fabrics.

"With the help of the technology of enzyme-linked-immunosorbent assay (ELISA) developed by experts at the China National Silk Museum, it has been confirmed that the carbonized fabrics taken from the urn coffin at the Wanggou site in Henan are silk fabrics," said Zhao Feng, curator of the museum, on Dec 2.

Gu Wanfa, director of the Zhengzhou Municipal Research Institute of Cultural Relics and Archaeology, says a cluster of the Yangshao Culture ruins dating back 5,000 to 7,000 years have been found in Henan. In addition to the silk fabrics at the Wanggou site, the same fabrics were unearthed at the Qingtai site and there are bone carvings of silkworms found at the Shuanghuaishu site. All provide solid evidence that proves the ancient Chinese began raising silkworms for silk production more than 5,000 years ago.

The fabrics were put in the urns to wrap the bodies of the dead. At the Wanggou site, the silk remnant was found in the skull of a child. Gu says this suggests that at that time, China's silk technology had matured rather than just begun.

He says one of the fabrics was leno dyed before the weaving process－a method of cooking the silk developed to prevent the dye from fading.

Silk originated in China and later become one of the country's major trade items. However, previous technical means were not enough to detect the fiber material of the carbonized textiles to provide archaeological evidence of a silk's origin.

In 2010, the China National Silk Museum began key scientific research set up by the National Cultural Heritage Administration on the origin of silk.

"As the testing technology has become more cost-efficient, we will carry out extensive sample testing in the Yangshao Cultural ruins in Henan in order to map the origin and distribution of silk in this area," says Zhou Yang, director of the national silk research program.

The urn coffin found in Yangshao actually resembles the shape of a silkworm pupa, which might imply ancient worship, or wishing that the dead can be reborn as a silk moth after it breaks through the cocoon, says Zhao Feng.