Smoke stalls rescues as Australia plans for next fiery onslaught 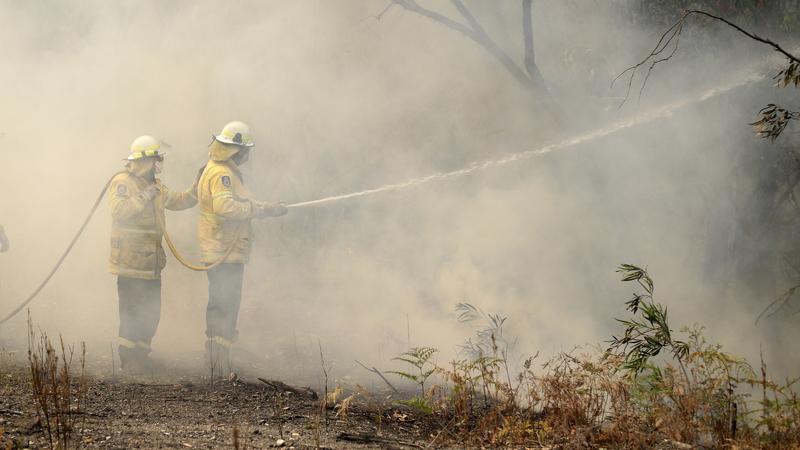 In this Dec 7, 2019, file photo, Rural Fire Service firefighters control a backburn in an effort to contain an approaching fire near Nattai, southwest of Sydney. Hot dry conditions have brought an early start to the fire season. (RICK RYCROFT / AP)

Fires have ravaged more than 8 million hectares of land across the country, an area nearly the size of Austria, killing 25 people, destroying thousands of building and leaving some towns without electricity and mobile coverage

Fires have ravaged more than 8 million hectares of land across the country, an area nearly the size of Austria, killing 25 people, destroying thousands of building and leaving some towns without electricity and mobile coverage.

Police on Monday confirmed the death of a 71-year-old man on the south coast of New South Wales (NSW) state who was reported missing on Dec 31.

A second day of light rain and cool winds brought some relief from heat-fueled blazes that consumed parts of two states over the weekend, but officials warned the dangerous weather was expected to return this week.

Victoria state Premier Daniel Andrews said about 400 people were airlifted on Sunday out of Mallacoota, a small, coastal holiday town.

“We had a plan to airlift another 300 out today. Sadly smoke means that is not possible,” he said.

Prime Minister Scott Morrison, who has come under criticism for what opponents call his government’s failure to tackle climate change, announced A$2 billion (US$1.4 billion) over two years for a newly formed National Bushfire Recovery Agency.

“What we are focusing on here is the human cost and the rebuilding cost for people’s lives,” Morrison told reporters in Canberra.

Dean Linton, a resident of Jindabyne in the Snowy Mountains, used the break in the immediate threat to his town to visit his wife and four children who had fled to Sydney.

He also picked up a fire-fighting pump and generator to help him protect the family home.

“There’s a lot of fuel in that national park; it would only take one lightning strike,” Linton told Reuters.

The bushfire season started earlier than normal this year following a three-year drought that has left much of the country’s bushland tinder-dry. 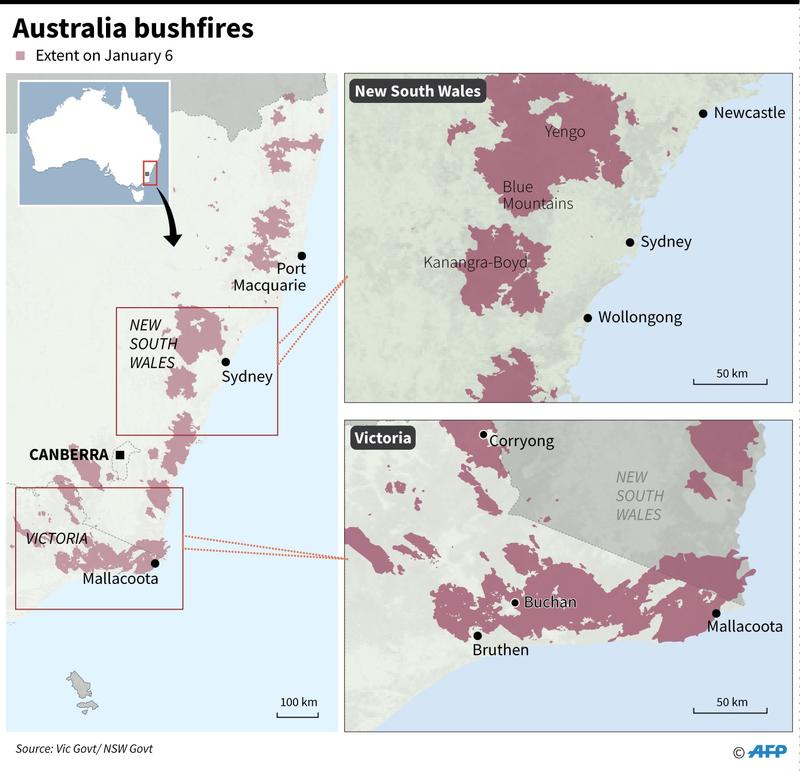 Following are some highlights of what is happening:

* New Zealand Defence Force said the first of three air force helicopters being sent to help departed on Monday while the other two were expected over the next two days.

* There were no emergency warnings in fire-ravaged states on Monday following the weather change. Two people were missing as 146 fires burned in New South Wales (NSW) but all were back at the “advice” level, the lowest alert rating.

* Victoria state had 39 fires with 13 “watch and act” alerts. All missing people had been accounted for, authorities said.

* About 67,000 people have left or been evacuated from fire-ravaged areas in Victoria, state Emergency Services Minister Lisa Neville said.

* Victoria set up a Bushfire Recovery Agency, with initial funding of A$50 million. The recovery is expected to cost “a lot more” than A$500 million, state premier Andrews said.

* Fire officials said light rain that has brought some relief posed problems for back-burning efforts to starve fires of fuel.

* NSW state power distributor Essential Energy said its network had suffered “significant damage”, with almost 24,000 customers without power. It might take a while to restore power to some areas because of the extent of damage and difficulty in gaining safe access, it said. Affected areas include Batemans Bay on the New South Wales south coast.

* As conditions eased, the NSW fire service said residents of Bega, Tathra, Merimbula, Eden, Pambula, Bermagui and villages to the north and south can now return though they need to monitor conditions.

* Insurers have received 5,850 bushfire-related claims in NSW, Victoria, South Australia and Queensland since the Insurance Council declared a bushfire catastrophe on Nov 8.

* Losses are estimated at A$375 million since November, with a further A$56 million in insured property losses in September and October, the Insurance Council said. Figures do not include properties lost over the past 24 to 36 hours in areas such as the NSW Southern Highlands and south coast.

* Accommodation provider Aspen Group (APZ.AX) said it expects a A$500,000 hit to both revenue and net operating income from the fires.

* Canberra was running short of masks as smoke blanketed the capital, ACT emergency services said. The National Gallery of Australia said it was closed to protect visitors and art works. The government department responsible for coordinating disaster response also closed due to poor air quality.

* Pictures on social media showed the city of Melbourne cloaked in thick smoke.

* Actor Russell Crowe skipped Hollywood’s Golden Globes ceremony, where he won an award for playing former Fox News Chief Executive Roger Ailes in the TV series “The Loudest Voice in the Room”. Presenter Jennifer Aniston said Crowe stayed in Australia to protect his family from the fires and read remarks he had prepared in which he said the fires were “climate change based”.

* Prime Minister Morrison faced more criticism of his handling of the crisis. “Poor political judgment is one thing. Competency is another thing altogether. This is the political danger zone Scott Morrison wants to avoid,” Rupert Murdoch’s the Australian newspaper, a supporter of the government, said in an article by the newspaper’s national affairs editor.

* Forty-one US firefighters are in Victoria with a further 70 from Canada and the United States expected to join on Jan. 8, the Victoria Country Fire Authority said on Twitter.