Chinese brands learn how to play the market 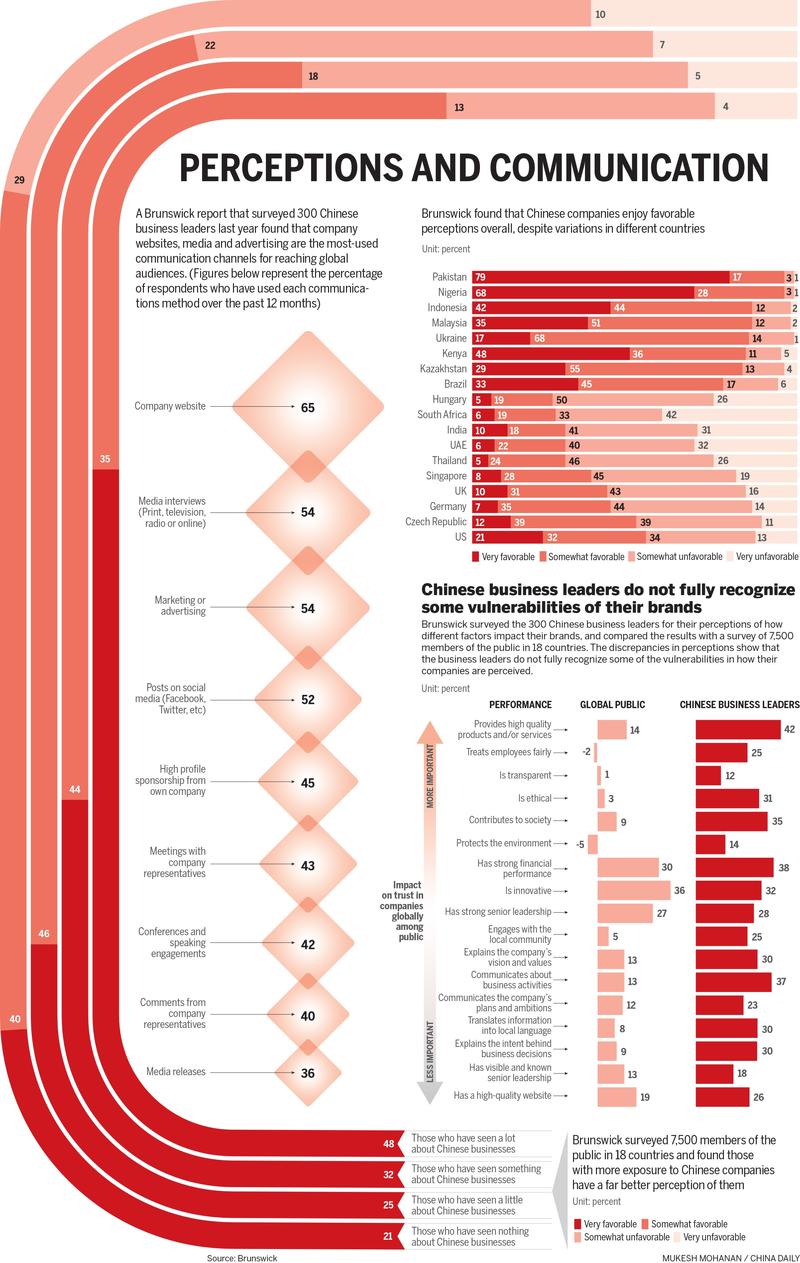 Su Lei still remembers his frustration as he tried to sell medical devices from Chinese manufacturer Mindray to hospitals in the United Kingdom a decade ago.

Now that we've built a brand, maintaining consistency and enhancing our image is particularly important, especially at a time when China is increasing its globalization efforts

"I was out the door in five minutes. I didn't have much to say except that our products were good and were cheap. When they asked if we had existing UK customers, I didn't really have much to add," said Su, general manager of Mindray UK.

A decade later, Mindray has established a solid brand in the UK, recognized for quality and innovation. It supplies equipment to more than half of the UK's approximately 700 public hospitals, and its revenue over the past three years has grown by 25 percent on average.

Mindray's breakthroughs in the UK's quality-led medical devices market are a testament to the emphasis the company has placed on building a strong brand.

The challenge it faced cannot be underestimated. Not only was the company's name unfamiliar to most UK medical experts, it also had to work extra hard to overcome the perception of cheap "made in China" products.

To establish its brand, Mindray first focused on satisfying UK hospitals' targeted needs through significant research and development. In recent years, for example, the company has modified its equipment in response to the emphasis of Britain's National Health Service on data and information integration.

This new focus means monitoring machines need to be updated to transfer data to patients' records automatically. Traditionally, medical staff members have to read the data and transcribe it into the records, which is more costly and prone to error.

In addition to competitive products, Mindray formed a dedicated customer service team in the UK to provide timely assistance to users, and increased media engagement and participation in medical fairs. It also regularly hosted many medical industry events to enable its customers to share their experiences of using the company's products.

Su said, "Now that we've built a brand, maintaining consistency and enhancing our image is particularly important, especially at a time when China is increasing its globalization efforts."

Mindray's successful story highlights Chinese companies' recognition of the importance of branding in securing new customers as they expand overseas.

Peter Williamson, an honorary professor of international management at the Cambridge Judge Business School in the UK, said, "In the past, Chinese companies tended to focus on product performance and price, but as they have gone abroad, they have realized it is difficult to compete overseas without a strong brand."

Chinese companies have stepped up their branding efforts significantly in recent years. Last year, 14 such companies made it to WPP's global 100 brands rankings list, including the e-commerce giant Alibaba and internet company Tencent. This is a huge advance, as just one Chinese company featured on the list in 2006.

Meanwhile, WPP, a UK multinational advertising and public relations company, calculated that the top 100 Chinese brands last year had a combined value of US$683.9 billion, year-on-year growth of 23 percent, and a 179 percent expansion of their total value in 2010.

WPP calculated brand value by combining financial data with consumer opinions gathered from interviews with more than 400,000 Chinese to give a dollar value to how a brand powers business.

Despite the fast growth, a report last month by the consultancy Brunswick concluded that Chinese companies still have significant capacity to boost brand values by further communicating their mission and core philosophy more proactively, especially as they engage increasingly in international activities amid trade friction.

The report, compiled through surveying 7,500 members of the public in 18 countries where Chinese companies had significant investments last year, found that although 67 percent of respondents had heard information about Chinese companies over the past year, only 12 percent had heard details directly from them.

The report found that the more information a company shares about itself with the public, the more likely it is to generate a favorable public perception. Of the respondents who said they had heard "a lot" about Chinese companies, 80 percent were favorable toward them and 83 percent trusted them.

Rory Macpherson, a partner at Brunswick Group, said, "There is a clear need to develop a purpose-driven narrative that is supported by communications activities in global markets where Chinese companies are operating or eyeing expansion."

Public perception of Chinese companies also determines the success rate of their overseas acquisitions, which the companies view as a faster route to markets compared to organic investments.

Peter Zysk, a director of Brunswick Group, said: "Public perception of Chinese companies is hugely important, because sometimes this can determine if a deal can happen, and can impact on deal prices. It can also impact on the regulatory approval process and the success of post-merger integration."

James Hebbert, managing director of marketing company Hylink UK, said that fundamentally there has been a shift in mindset as Chinese companies increasingly recognize the importance and consistency of brand strategy, especially as "digital and affordable travel is making the world smaller".

For example, Chinese carmaker BYD has linked its brand image with sustainability and innovation by focusing on supplying electric taxis and buses in 300 cities in more than 50 countries and regions. The endorsement its effort has received from various governments has become "a badge of confidence" for its sustainability image, Hebbert said. 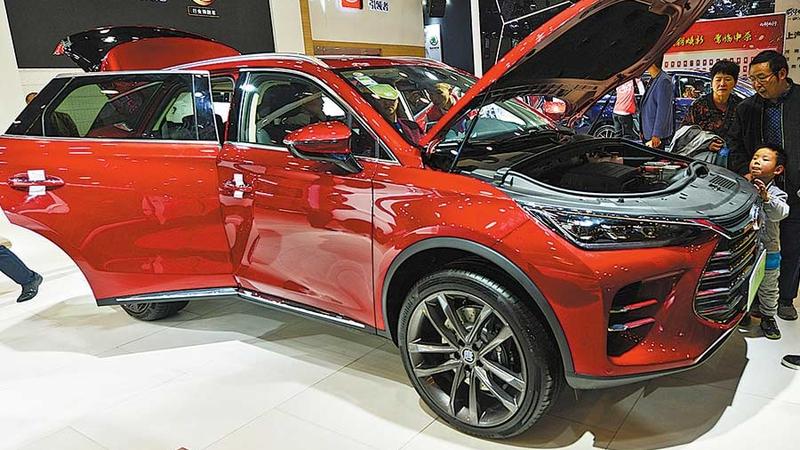 A BYD spokesman said the company has also invested in many factories in overseas markets such as the United States, Brazil, Hungary and France as a part of its efforts to increase global visibility and demonstrate commitment. "We're striving to build an international brand instead of being perceived as a Chinese brand," the spokesman said.

When Alipay collaborated with ePassi to roll out its payment terminals in Finland, the two companies created a solution to introduce e-payment technology to Finnish taxis for the first time. Alipay users can scan a QR code sticker in each taxi, manually key in the amount they need to pay, and this sends payment directly to the ePassi accounts of the cab company.

Alipay has worked with ePassi to create solutions to satisfy the needs of Finnish shops, restaurants, hotels and airlines. The increasing popularity of Alipay in the country has become a positive enforcement of its "finlife" brand image.

Despite Chinese companies' recognition of the importance of branding, many are still on a "trial and error" journey to understand how to effectively build a positive brand, and some have learned their lessons the hard way.

One example is the private company Sanpower Group in Nanjing, Jiangsu province, which acquired a majority stake in the iconic UK department store House of Fraser in 2014.

Sanpower chairman Yuan Yafei was perhaps too quick to announce his ambitious plans to launch 50 new House of Fraser stores in China, because when this target was not met, his words were cited in various UK media outlets as the basis for skepticism in the brand, especially when Sanpower last year announced the closure of 31 House of Fraser stores in the UK, affecting 6,000 jobs.

Another example of an ineffective branding campaign came when Chinese smartphone maker Xiaomi made an embarrassing mistake in launching a "flash sale" promotional activity when it entered the UK market last year.

Xiaomi did not clarify its promotional activity from the outset. As a result, the campaign was viewed by UK consumers as misleading, and left thousands of potential buyers disappointed. The incident attracted dozens of user complaints on Facebook and Twitter, leading to negative media coverage before the company had even established its presence in the UK.

"In this case, Xiaomi should have explained the rules of its flash sale from the beginning, to provide transparency and clarity. This is particularly important for the UK market, where consumers care very much about rules, procedures and fairness," Hou said.

Hebbert, from Hylink UK, agreed, adding: "Marketing tactics used to make certain products appear more scarce are used by established brands all the time, such as Apple. But because Xiaomi is a newcomer to the UK market, it should focus on a solid foundation first."