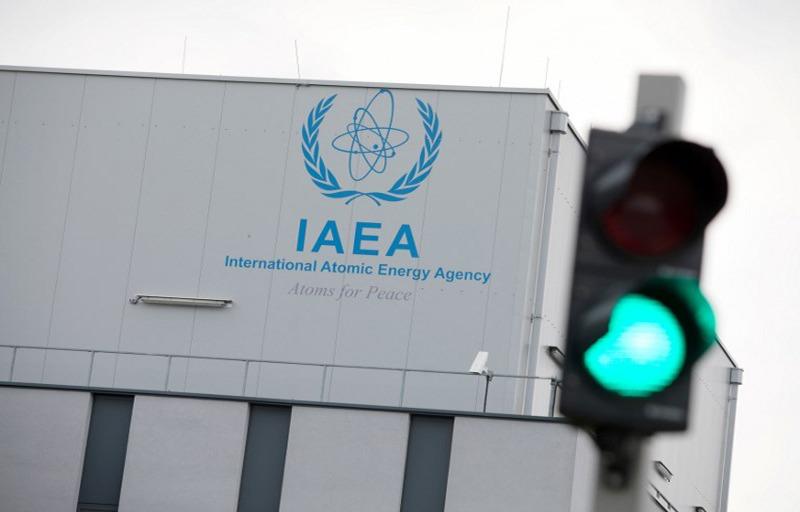 This June 8, 2018 photo shows the logo of the International Atomic Energy Agency (IAEA) on the building of the IAEA laboratories in Seibersdorf, near Vienna. (ALEX HALADA / AFP)

VIENNA — The UN nuclear watchdog said Monday that Iran remains within the limitations set by the deal reached in 2015 with major powers, aimed at keeping Tehran from building atomic weapons in exchange for incentives.

In a confidential quarterly report distributed to member states and reviewed by The Associated Press, the International Atomic Energy Agency (IAEA) said Iran has been abiding with key limitations set in the so-called Joint Comprehensive Plan of Action, or JCPOA.

The issue has grown more complicated since the US withdrew unilaterally in May from the deal and then re-imposed sanctions. Iran's economy has been struggling ever since and its currency has plummeted in value.

The other signatories to the deal — Germany, Britain, France, Russia and China — are continuing to try and make it work.

In the report, the Vienna-based IAEA said the agency had access to all sites in Iran that it needed to visit and that inspectors confirmed Iran has kept within limits of heavy water and low-enriched uranium stockpiles.

"Timely and proactive cooperation by Iran in providing such access facilitates implementation of the additional protocol and enhances confidence," the report stated, referring to the procedure detailing safeguards and tools for verification.

In its last quarterly report in August, the agency also concluded Iran had stayed within key limitations set by the JCPOA.

The US re-imposed further oil and banking sanctions on Iran earlier this month that where lifted under the 2015 nuclear deal but granted waivers to eight major importers to continue buying Iranian petroleum products without penalty for another six months.

The latest batch of US sanctions severely impacts Iran's oil industry, the major source of the country's foreign revenue. Tehran worries OPEC and non-OPEC countries such as Russia will increase their production to fill the gap in response.