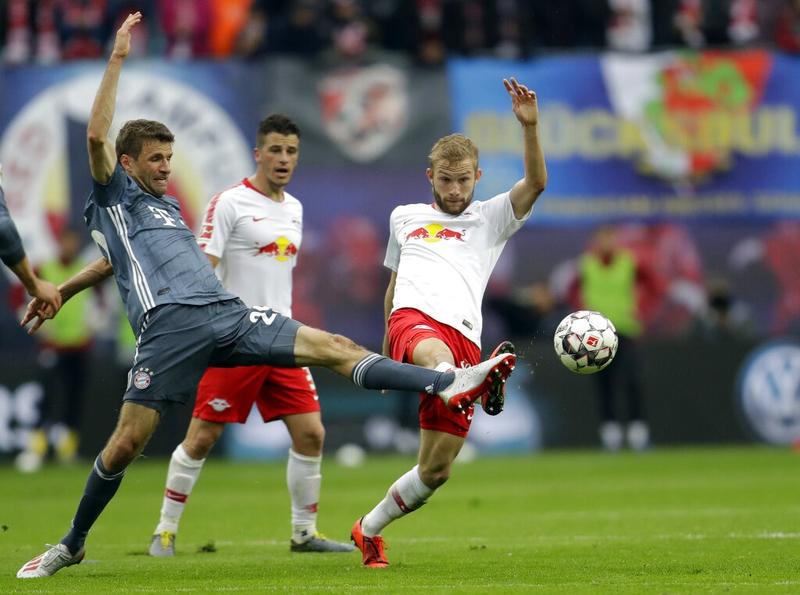 BERLIN — Bayern Munich missed the chance to win the Bundesliga in a 0-0 draw at Leipzig while Borussia Dortmund kept the title race alive by beating Fortuna Duesseldorf 3-2 on Saturday.

Bayern, which would have secured a seventh straight title with a win, allowed Dortmund to close the gap to two points before the final round next weekend.

With a two-point lead, Bayern need just a draw against Eintracht Frankfurt in Munich next Saturday to seal the title. Dortmund, on the other hand, must win at Borussia Monchengladbach and hope for a Frankfurt victory to take the title

Bayern boasts a considerably better goal difference by 17 goals, meaning a draw against Eintracht Frankfurt in Munich next Saturday will be enough to seal the title. Dortmund must win at Borussia Monchengladbach and hope for a Frankfurt victory to take the title.

"It was never so close," Bayern forward Thomas Mueller said of the title race. "We really want to get the thing with our fans behind us."

The league race is going to the final day for the first time since Wolfsburg pipped Bayern to the title in 2009.

With Germany coach Joachim Loew watching from the stands, Bayern missed a host of chances to score the goal it needed.

Leon Goretzka had the visiting fans celebrating in the 50th minute when he volleyed in an attempted clearance, but the goal was ruled out through VAR as Robert Lewandowski was marginally offside in the buildup. 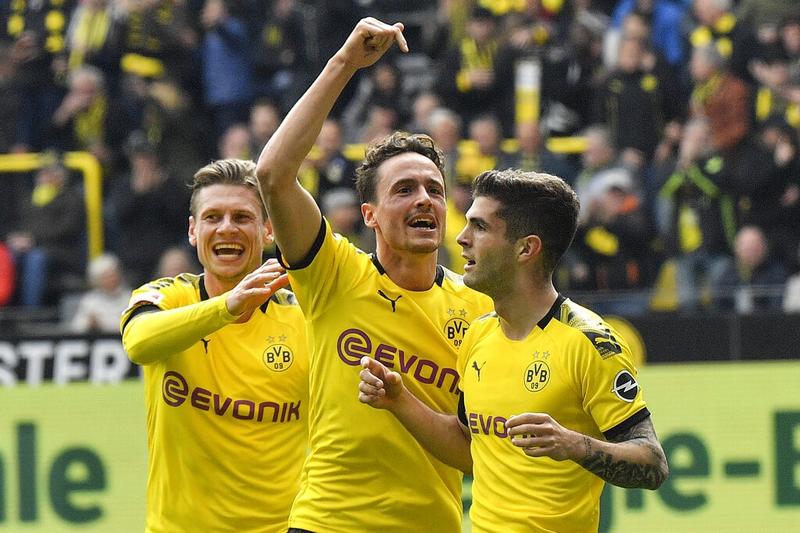 Christian Pulisic, playing his last home game for Dortmund, opened the scoring four minutes before the break with his first headed goal in the Bundesliga. It could be his last. The American midfielder is leaving for Chelsea in a 64 million euro (now US$71 million) deal agreed in January.

Dortmund 'keeper Marwin Hitz - who was filling in for the injured Roman Buerki - let Duesseldorf captain Oliver Fink's harmless-looking header slip through his fingers in the 47th.

ALSO READ: Dortmund on verge of giving up, but Bayern then held to draw

Then came the news that Goretzka had scored for Bayern, but it was ruled out and Thomas Delaney restored Dortmund's lead over Duesseldorf in the 53rd.

Dodi Lukebakio missed a penalty for Duesseldorf, before Mario Goetze thought he'd sealed it in injury time. Dawid Kownacki pulled one back, however, to set up another nervy finale. 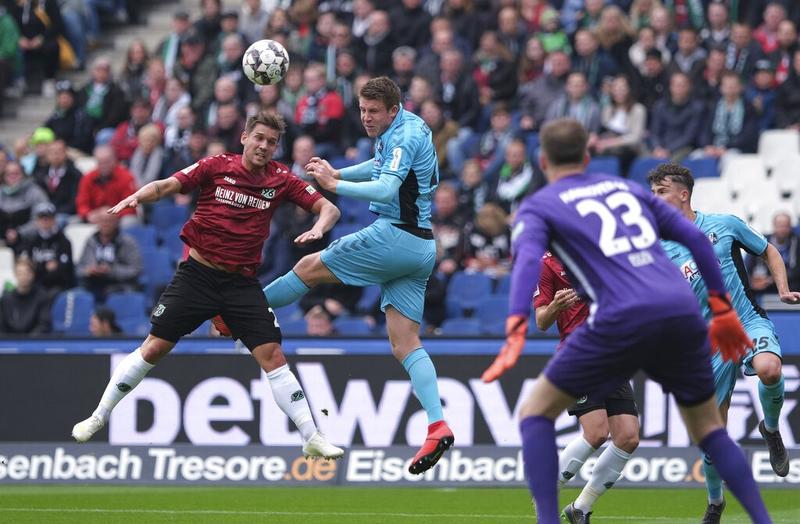 Hannover's Oliver Sorg, left, and Freiburg's Dominique Heintz, second from left, head for the ball during the German Bundesliga soccer match between Hannover 96 and SC Freiburg in Hannover, Germany, May 11, 2019. (PETER STEFFEN / DPA VIA AP)

Stuttgart defeated Wolfsburg 3-0 to clinch the relegation playoff place and condemn the bottom two teams, Hannover and Nuremberg, to the second division.

Hannover was relegated on the day it produced its best performance of the season - beating Freiburg 3-0.

Gladbach defeated Nuremberg 4-0 away to move to fourth, ahead of Bayer Leverkusen on goal difference, for the last Champions League qualification place. Leverkusen was held at home by Schalke to 1-1.

Also, Werder Bremen won at Hoffenheim 1-0, and Hertha Berlin won at Augsburg 4-3 thanks to Salomon Kalou's goal in injury time.

Frankfurt can reclaim fourth place on Sunday with a win at home against Mainz.