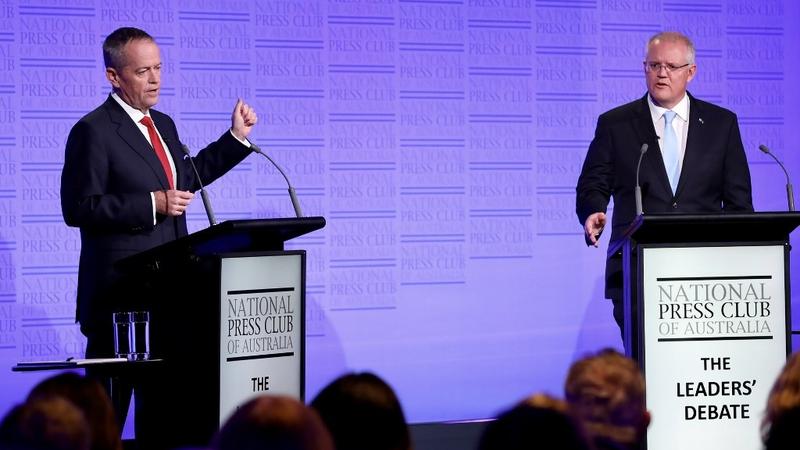 CANBERRA — Both candidates vying to become Australia's prime minister in an election on Saturday are promising to stay in the job for the entire three-year term, shut the revolving door to high office and put the choice of the nation's leader back in voters' hands.

Lasting the distance between elections was once a prime minister's pledge that Australian voters didn't need to question. But since an extraordinary period of political instability began a decade ago, four prime ministers have been dumped by their own parties and only one has been ousted by voters.

Polls suggest Morrison will have one of the shortest tenures of the 30 prime ministers in the 118-year history of the Australian federation, having served in the job for only nine months by election day

As a result, both the ruling conservative Liberal Party and the opposition center-left Labor Party have tightened their rules to make their leader's ejector seat more difficult to activate. The changes acknowledge growing anger over voters' loss of control over who runs the country. Foreign governments have also become wary of striking bilateral deals with Australian prime ministers who can be replaced without warning.

But both parties are also warning voters against trusting that the rival candidate could maintain his government's support and end the chaos of Australia's recent political history.

If the winner in the race between incumbent Prime Minister Scott Morrison and opposition leader Bill Shorten keeps his promise to last three years, he will become the first to survive a single term since Prime Minister John Howard lost his Sydney seat in 2007 elections.

It was an ignoble end to the political career of Australia's second-longest serving prime minister. Howard lasted at the helm for more than 11 years, having led the Liberals to four consecutive election victories.

Since then, six prime ministers have been sworn in, including Kevin Rudd, who had the job twice. He was dubbed "Recycled Rudd" in his second incarnation before he became the only prime minister in the past decade to lose power at the will of voters, expressed in 2013 elections. The rest have been dumped by their own parties in the face of poor opinion polling. 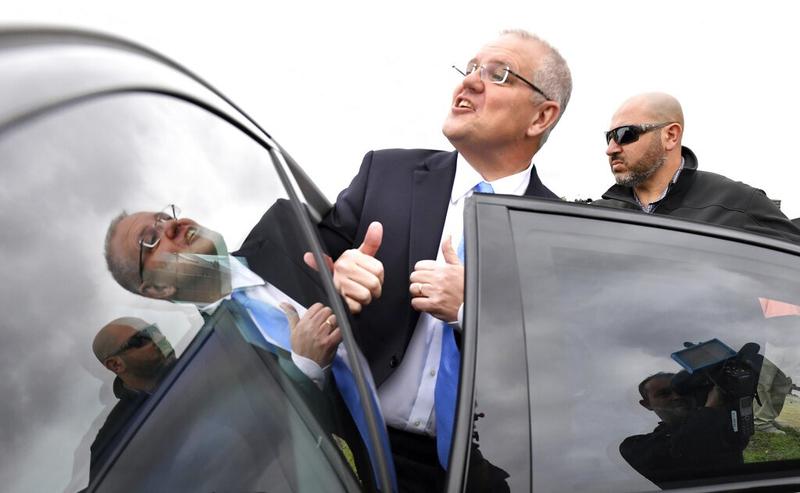 Polls suggest Morrison will have one of the shortest tenures of the 30 prime ministers in the 118-year history of the Australian federation, having served in the job for only nine months by election day.

But both the ruling Liberals and Labor have acknowledged that the Australian public is sick of the revolving door to the prime minister's office and have changed their rules to make the job more secure.

Labor became the first party to increase the level of difficulty to dump a prime minister in a reform pushed by Rudd in 2013.

Rudd had been ambushed in 2010 in a plot conceived and executed over a few hours by Labor lawmakers who decided to switch support to his deputy Julia Gillard.

It was a shock to many Australians, who went to bed with Rudd in charge of the government and woke in the morning to find Gillard had taken over as prime minister. 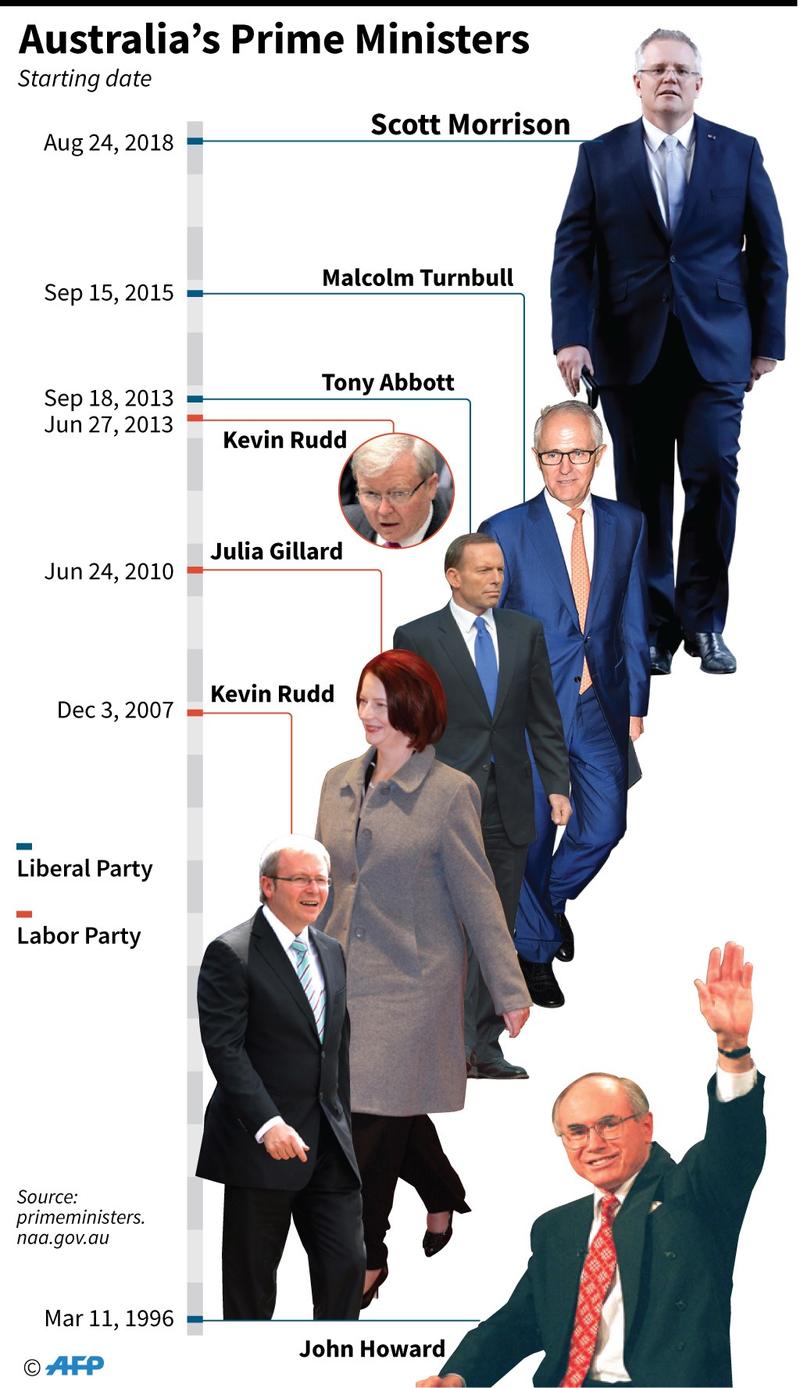 Australian federal elections are presidential in the sense that the campaigns focus on the party leaders, who contend to be elected prime minister. But in fact, voters don't directly elect the prime minister. They vote for local candidates running for 151 seats in the House of Representatives, and the party with a majority of seats in that lower chamber forms a government.

Voters in Australia don't directly elect the prime minister. The party with a majority of seats in that lower chamber forms a government, and the majority party's leader then becomes prime minister

The majority party's leader then becomes prime minister. Many Australians were surprised to learn in 2010 that a government can change the prime minister without first consulting voters. An elected prime minister had only been torn down by his own party twice before since World War II

The process for Labor to remove its next prime minister endorsed by voters in an election would now take a month and involve tens of thousands grass-roots members of the party having their say.

Now a 75% majority of Labor lawmakers have to sign a petition to force a leadership ballot instead of a simple majority. The leadership decision is no longer the lawmakers' alone. In a major democratization of the party's process, more than 30,000 members of the party nationwide who pay an annual fee but are not elected have a 50% stake in the decision through postal ballots.

"In the case of the Labor Party, it would be immensely difficult to get rid of a leader between elections if they're determined not to go," Bongiorno said.

Morrison initially rejected his own party adopting similar rules. "Regulating for culture is never effective," he said two days after he became prime minister in August.

In December, however, Morrison made a surprise announcement that his fellow Liberal lawmakers had decided that a minimum of two-thirds of them would need to agree before a prime minister's leadership could be put to a ballot. A single-vote majority had led to the leadership ballot that installed Morrison as the latest prime minister.

But the Liberals' rules only have the endorsement of Liberals who were in Parliament in December. The party's lawmakers will change after the election and the new Liberal lawmakers won't be bound by a decision made by lawmakers in the last Parliament, some of whom have retired or lost their seats.

Labor's rules are more concrete, having been endorsed by the party's national conference of lawmakers and other party members.

But Bongiorno said both parties are similarly deterred from changing leaders. He suspected that the voter backlash for the Liberals by ousting another prime minister against the spirt of the December agreement would be too great for lawmakers to contemplate the option.

"The Liberal Party hasn't gone down the road of rank-and-file selection, but I don't think it actually makes a great deal of difference," Bongiorno said. "The transactional costs of a contest under those kinds of rules would be just huge."

Shorten, as a party factional leader, played a key role in overthrowing both Rudd and Gillard as Labor prime ministers when the party was last in power from 2007 to 2013. He argues that his party had demonstrated reform by uniting under his leadership for the past six years while the Liberals had three prime ministers.

"I think we need one more change of prime minister, then we can finish it for a while," Shorten said in a debate against Morrison last week.