Art with a message

An exhibition of works by Xu Beihong (1895-1953) celebrates his life and how he encouraged people to strive for independence and righteousness. Lin Qi reports. 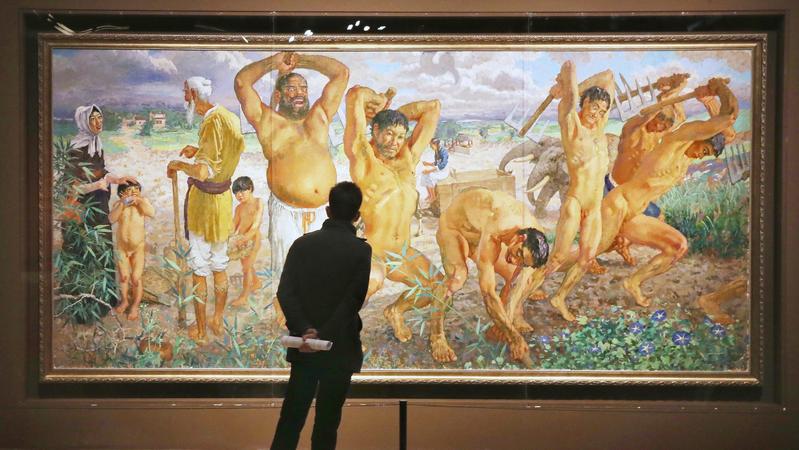 A visitor stands in front of Xu Beihong's masterpiece, Yugong Yishan, at the ongoing show at the National Art Museum of China. (JIANG DONG / CHINA DAILY)

Master artist Xu Beihong (1895-1953) did two paintings in 1940 illustrating the Chinese fable of Yugong Yishan about a man attempting to move mountains. They are recognized as the best-known pieces in his oeuvre.

The story of Yugong Yishan, first mentioned in the fourth-century BC Taoist text Liezi, has been told for generations in Chinese households.

It hails the tenacity of an old man who endeavors to remove mountains that block the path in front of his house. Despite being considered a fool, he firmly believes that his offspring will continue the efforts after he dies.

And he didn't place the grey-haired man Yugong in the center, but depicted him turning to one side and talking to a woman. Rather, he highlighted several almost naked, muscular men digging on the mountains in the middle of the painting.

The two works, both titled Yugong Yishan, are now on show at Nation and Era, an exhibition at the National Art Museum of China through March 4 that celebrates Xu's life and how he encouraged people to strive for independence and righteousness.

The men doing the digging in the paintings do not look Chinese: They have darker skin tones, thick, hairy eyebrows and short, curly hair, while men in ancient China normally had long hair.

When Xu was in India, he was invited by Rabindranath Tagore to exhibit and lecture at the Visva-Bharati University in Santiniketan, which the Nobel laureate had established in 1922. 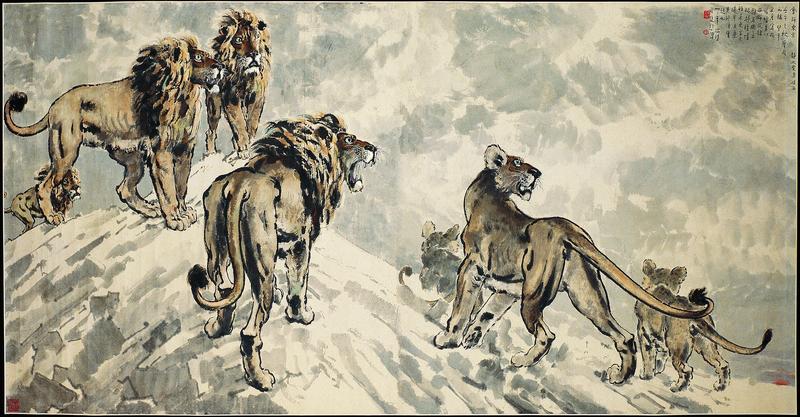 Artist Xu Beihong portrays lions in the painting, Huishi Dongjing (1943), to express his confidence in China's victory in the War of Resistance Against Japanese Aggression (1931-45). (PHOTO PROVIDED TO CHINA DAILY)

And students and staff members of the Visva-Bharati University offered to help when they heard that Xu needed models to paint.

Sketches of these Indian models are also on show at the NAMOC exhibition, as are portraits Xu did for Tagore and Mahatma Gandhi, besides Indian landscapes.

In the paintings, Xu also added elephants as carriers of materials, rather than cattle, which were more common in China at that time.

Explaining why he used Indian models, Xu said: "Both the Indians and the Chinese work industriously. We may have different looks but we share the same beliefs."

Xu said the idea to do a work on Yugong Yishan had been in his mind for two decades, but he was motivated to start working on the project by the construction of the Burma Road in the late 1930s.

The road linking Myanmar and Southwest China's Yunnan province was of strategic importance to convey supplies to China during the War of Resistance Against Japanese Aggression (1931-45).

Then, tens of thousands of Chinese workers and engineers participated in the project, using primitive tools, and many lost their lives because of the hazardous terrain.

Xu completed the paintings to pay tribute to the builders whom he hailed as "modern-day Yugong". 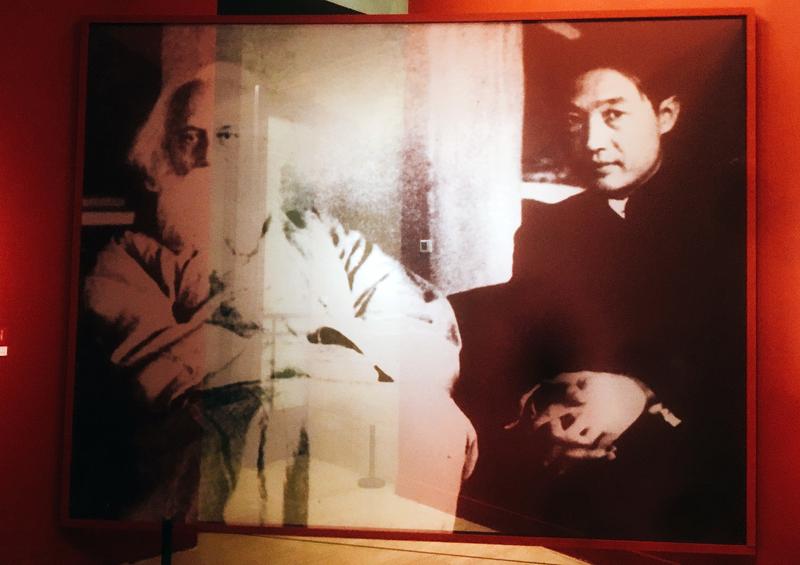 Heroism and romanticism are recurring themes in Xu's major works, which he developed during his studies at the National High School of Fine Arts in Paris and while traveling in Europe in the 1920s.

The director of the NAMOC, Wu Weishan, says Xu adopted the grand-narrative approach of classic European paintings to depict the gallantry of figures in ancient China. He sparked patriotic feelings among fellow Chinese and asked them not to give in to invaders and oppressors.

Besides the Yugong Yishan works, Xu also painted Tian Heng and His 500 Retainers and Xi Wo Hou, two oil works both based on ancient literature. And the two works are also on show at the NAMOC exhibition.

While the former work is about a nobleman named Tian Heng mentioned in Shiji (Records of the Grand Historian), whose suicide drove his people to take their lives, the latter is about suffering under the tyrannical rule of the Xia Dynasty, as described in Shangshu (The Book of Documents).

The four paintings all measure more than 3 meters in length, and they are from the collection of the Xu Beihong Memorial Hall in Beijing, which was built from a family donation of artworks and documents after Xu died.

Wu says the show is the first time that the four paintings are being displayed together.

Xu Beihong's son, 72-year-old Xu Qingping, says the paintings were in a critical condition in the late 1970s, with pigment falling off, but government support allowed the memorial hall to bring in a French restoration team.

"My father would be quite happy if he could see these works now," he says.

Tian Heng and His 500 Retainers (1930), a work based on ancient Chinese literature. (PHOTO PROVIDED TO CHINA DAILY)

The current NAMOC exhibition also has other major pieces from Xu's repertoire. Most are on loan from the Xu Beihong Memorial Hall.

One notable work is Baren Jishui (People in Chongqing Drawing Water), a 3-meter-long ink painting produced in 1937. It shows people in Chongqing, a mountainous city, climbing flights of stairs to fetch water from rivers.

Wu says the work reveals the humane side of Xu, who came from a humble background, growing up in rural Jiangsu province in East China.

The painting was first displayed at an exhibition in Chongqing in 1938. Xu's wife, Liao Jingwen (1923-2015), recalled that it moved many in the audience including an Indian diplomat who wished to buy it.

Since the painting was inscribed with "a gift to my beloved wife", Xu painted an identical piece for the diplomat.

In his works, Xu portrayed not only ancient heroes but also animals.

His depiction of galloping horses is a familiar scene to many Chinese.

Hua Tianxue, a researcher with Beijing's Chinese National Academy of the Arts, says that, unlike in many other paintings, most horses in Xu's works are standing or running, looking like warriors.

"His works are a testimony to what he often said: 'People may have no pride, but cannot live without integrity'," Wu says.