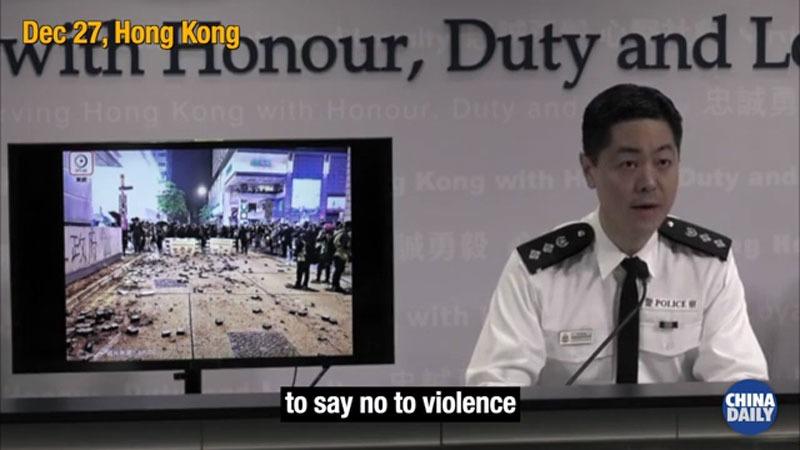 HONG KONG - Hong Kong police on Friday slammed rioters who went on a rampage across the city during the two-day Christmas holidays as acting like “triad gangsters”.

Kenneth Kwok Ka-chuen, chief superintendent of the Police Public Relations Branch, said on Friday masked, black-clad rioters and their supporters had ruined the city’s festive atmosphere with violence and hatred.

Following a brief lull, protest violence returned to the streets on Christmas Eve as rioters trashed restaurants and stores with Chinese mainland links, and clashed with the police. Major shopping districts, including Sha Tin, Tai Po, Mong Kok and Tsim Sha Tsui, took the brunt of the destruction.

Kenneth Kwok Ka-chuen, chief superintendent of the Police Public Relations Branch, said on Friday masked, black-clad rioters and their supporters had ruined the city’s festive atmosphere with violence and hatred

Mobs also vandalized a restaurant in Mong Kok and assaulted its employees with chairs after the owner refused to hand over its CCTV footage as demanded by the protesters. The owner, however, was eventually forced to give in.

“All these are what triad gangs normally do,” said Kwok, adding that rioters have thrown the whole city into a state of “black terror”, with everyone living in constant fear.

The rioters have not only ruined the business environment, but also deprived residents of their freedom of speech, he said.

The police have appealed to victims of the violence and vandalism to make a report and cooperate with them in restoring justice.

According to the police, 336 people, aged between 12 and 54, were arrested from Monday to Thursday for various offenses, including unlawful assembly and possession of offensive weapons.

On Tuesday, the police seized some smoke bombs, explosives and combustible chemicals from a mini-storage facility in Kwun Tong, and arrested an 18-year-old student in connection with the case.

The seizure has raised alarm over the community’s safety, said Senior Superintendent Kong Wing-cheung. He warned that storing offensive weapons, such as explosives, seriously endangers the lives of others.

In 2016, a self-storage facility in an industrial building in Ngau Tau Kok burned for more than 100 hours. Two firemen died fighting the blaze.