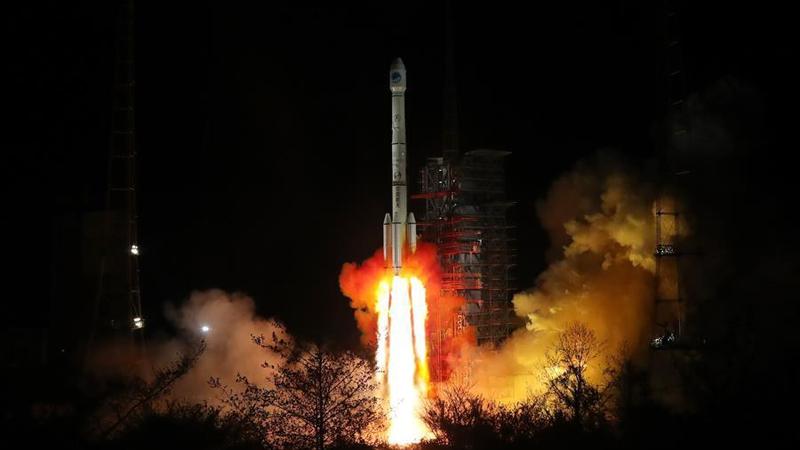 XICHANG - China's home-grown global satellite navigation system came to completion on Thursday with the launch of another BeiDou-3 satellite at 11:57 pm from the Xichang Satellite Launch Center, located at the southwestern Sichuan province.

If a navigation signal went wrong, the satellite could inform users within 6 seconds to switch other signals

Launched on a Long March-3B carrier rocket, it is the 41st of the BeiDou navigation system, and it will work with 16 other Beidou-3 satellites already in orbit.

It is also the first BeiDou-3 satellite in high orbit, about 36,000 km above the Earth. In a geostationary orbit, following the Earth's rotation, it will view the same point on Earth continuously.

A basic system with BeiDou-3 satellites orbiting will be in place by the year-end to serve countries in the China-proposed Belt and Road Initiative, said Yang Changfeng, the system's chief designer.

This year has seen an intensive launch of BeiDou satellites. China will launch another two satellites into space by the end of this year, said Yang.

Apart from radio navigation system, the satellite is equipped with an improved radio determination satellite service that can provide short message services to 10 million subscribers each hour.

With an advanced satellite-based augmentation system, the satellite can also provide low-cost and reliable navigation services to civil aviation clients at home and abroad.

"If a navigation signal went wrong, the satellite could inform users within six seconds to switch other signals," said Pan Yuqian, chief designer of the BeiDou-3 series.

The satellite is carrying hydrogen and rubidium atomic clocks, which will play a key role in positioning and timing accuracy.

Atomic clocks are the most accurate time and frequency standards. They use vibrations of atoms to measure time. An accurate and ultra-stable set of atomic clocks is essential for global navigation satellite systems.The clocks are 10 times more stable than those used in previous BeiDou satellites, according to scientists.

Named after the Chinese term for the Big Dipper, the BeiDou system started serving China in 2000 and the Asia-Pacific region in 2012. It will be the fourth global satellite navigation system after the US GPS system, Russia's GLONASS and the European Union's Galileo.

By around 2020 when the BeiDou system goes global, it will have more than 30 satellites.