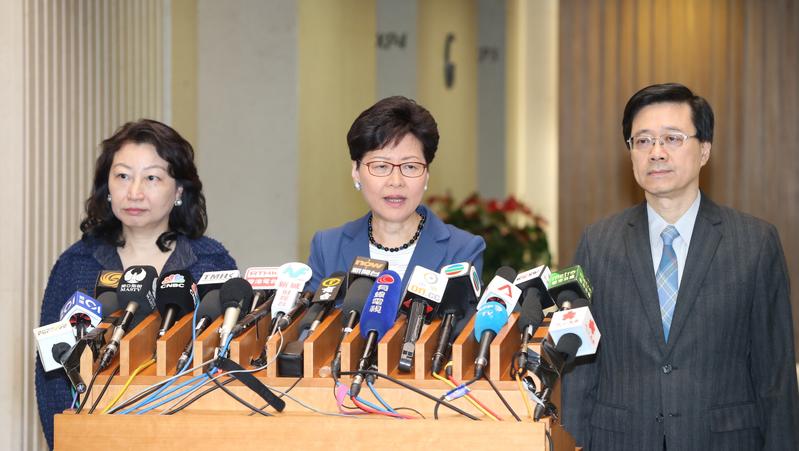 Speaking in English, Lam said: "The explanation will focus on the additional safeguards that we have introduced, especially on May 30 by the Secretary for Security. Those six measures will provide some of the very reassuring human rights safeguards that we have heard some people, especially from the legal sector, who have put those proposals to us in the earlier part of the consultation..."

Lam said the bill would have a second reading debate on Wednesday. She told reporters the legislation was important and would help Hong Kong uphold justice and fulfill its international obligations. Safeguards introduced in May will ensure that the legislation protects human rights, she stressed. The CE also pledged to keep the LegCo updated with regular reports should the bill be passed into law.

In response to a reporter's question, she said: "I don't think it is an appropriate decision for us to now pull out this bill because of the very important objectives that this bill is intended to achieve."

Hong Kong Chief Secretary for Administration Matthew Cheung said on Monday the government had improved the entire proposal to show it had been responding to social demands.

"I hope that in the Legislative Council, everyone can continue the discussion in a frank, peaceful and rational way and continue to follow up on this matter," Cheung said.

Guards removed damaged barricades from the front of the LegCo building during Monday's morning rush hour and cleaning staff washed away protest debris.

In an early morning press release, the government said it acknowledged and respected that people held different views on a wide range of issues, and would continue to engage, listen and allay concerns through calm and rational discussion and pointed out it had explained in detail the need for tabling the bill on many occasions.

In the press release, the government pointed out the bill was prompted by the murder of a Hong Kong citizen in Taiwan and that the bill covered only the most serious crimes punishable by imprisonment of seven years or more, that is, cases that would normally be tried in Hong Kong’s High Court.

According to the press release, "Thirdly, none of these serious criminal offences relate to the freedom of assembly, of the press, of speech, of academic freedom or publication. And no surrender for a political offence or if the purported charges are in fact on account of race, religion, nationality or political opinions.

"Fourthly, executive and judicial safeguards built into the system protect all the human rights enshrined in the Basic Law and Hong Kong Bill of Rights Ordinance..."

In the press release, the government assuerd that as guaranteed under the Basic Law, HK courts exercised judicial power independently, free from any interference.

In separate a press release issued Monday, the non-official members of the Executive Council (ExCo Members) iterated their support for the bill.

At a media briefing held later in the day, Senior Superintendent of Police for Organized Crime & Triad Bureau Steve Li Kwai-wah said 19 protesters had been arrested following the clash. Seven were arrested for illegal assembly and the rest for attempting to block roads in Wan Chai.

He said 358 people had been detained early Monday morning on suspicion of participating in the illegal assembly and later released.

Li condemned the violence, noting how dangerous implements such as scissors and razor blades had been found at the scene.