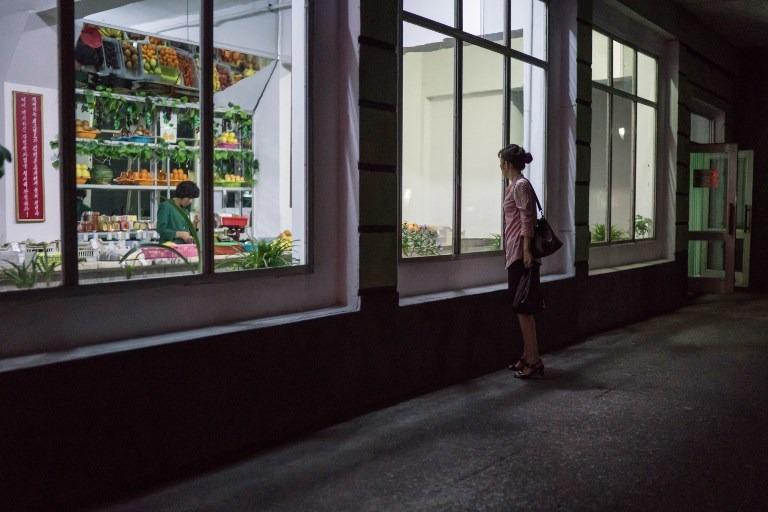 A file photo taken on Sept 26, 2017 shows a woman standing outside a grocery store on a street in Pyongyang. (ED JONES / AFP)

UNITED NATIONS — An estimated 11 million people from the Democratic People's Republic of Korea (DPRK) — over 43 percent of the population — are undernourished and "chronic food insecurity and malnutrition is widespread," according to a UN report issued Wednesday.

The report by Tapan Mishra, the head of the UN office in DPRK, said that "widespread undernutrition threatens an entire generation of children, with one in five children stunted due to chronic undernutrition."

The UN humanitarian team in the country is calling for US$120 million "to urgently provide life-saving aid to 3.8 million people"

With only limited health care and a lack of access to clean water and sanitation, "children are also at risk of dying from curable diseases," the report added.

Mishra said that last year's UN appeal for US$111 million to help 6 million of the most vulnerable people from DPRK was only 24 percent funded, one of the lowest levels in the world.

UN spokesman Stephane Dujarric told reporters Wednesday that the UN humanitarian team in the country is calling for US$120 million "to urgently provide life-saving aid to 3.8 million people." Without adequate funding this year, some agencies providing desperately needed help to people from DPRK will be forced to close down, he said.

Dujarric said the DPRK government asked last month for help from international humanitarian groups to combat food shortages. He said food production figures provided by DPRK showed "there is a food gap of about 1.4 million tons expected for 2019, and that's crops including rice, wheat, potato and soybeans."

Mishra's report said people from DPRK faces annual shortfalls in agricultural production because of a shortage of arable land, lack of access to modern agricultural equipment and fertilizers, and recurrent natural disasters. Last year, it said, there was a severe heat wave in provinces considered to be the country's "food basket," and the food situation was further aggravated by Typhoon Soulik in late August.

Although the national rate of stunting has dropped significantly from 28 percent in 2012 to 19 percent in 2017, Mishra cited major regional differences varying from 10 percent in the capital area of Pyongyang province to 32 percent in Ryanggang province in the northwest bordering China.

He said an estimated 3 percent of children under age 5 — approximately 140,000 — "suffer from wasting or acute malnutrition" and "have a higher risk of mortality."

The report was issued days after a summit between Kim Jong-un and Donald Trump ended without any agreement on the DPRK's nuclear program.

While UN Security Council sanctions imposed on the DPRK over its nuclear and missile programs are supposed to exempt humanitarian activities, "humanitarian agencies continue to face serious unintended consequences on their programs," Mishra said. He cited "lack of funding, the absence of a banking channel for humanitarian transfers and challenges to the delivery of humanitarian supplies."

The banking channel of DPRK has been suspended since September 2017 and attempts to find a replacement have been unsuccessful, Mishra said.

He welcomed new procedures approved by the Security Council committee monitoring sanctions against the DPRK last August to streamline and expedite requests for exemptions from sanctions for humanitarian programs.

However, Mishra said, "the continued risk-averse approach taken by suppliers and some authorities in transit countries ... continues to cause significant delays in the delivery of life-saving humanitarian assistance."