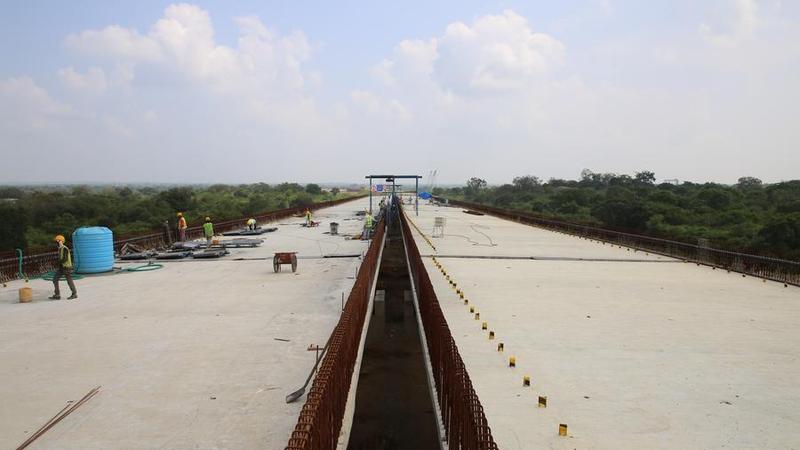 This Dec 15, 2017 photo shows part of the expressway located north of the Hambantota port in Sri Lanka. Ties between Sri Lanka and China in Hambantota has flourished in 2017, with the vision of further developing Hambantota slowly becoming a reality. (ZHU RUIQING / XINHUA)

COLOMBO -- Hambantota, located at the south end of Sri Lanka, only 10 nautical miles from the international shipping route in the Indian Ocean, is now racing along a developmental fast-track.

There will be several industrial zones in the Hambantota district, as well as other selected districts where we are expecting Chinese companies to set up, invest and contribute further

From the foundation stone of the Sri Lanka-China Industrial Zone being laid in Hambantota at the beginning of this year, to the official launch of operations at the Hambantota Port through a Sri Lanka-Sino joint venture at the end of the year, cooperation between Sri Lanka and China in Hambantota has flourished in 2017, with the vision of further developing Hambantota gradually becoming the reality.

On the construction site of the almost-finished second phase of the Hambantota Port, gantry portal cranes and some other port facilities raise their heads upwards to the sky.

Liu Zhaohui, the Assistance Project Manager from China Harbour Engineering Company Ltd. (CHEC) said, "we had finished all the civil engineering of the project by Nov 2015 and most of the handling facilities will have been delivered to the project site within this year. Only two bunkering barges will be remaining, by mid-May next year, and the second phase will be entirely completed."

On Dec 9, Sri Lanka and China officially launched the operations at the Hambantota Port through a joint venture between Sri Lanka Ports Authority and China Merchant Port Holdings.

Sri Lankan Prime Minister Ranil Wickremesinghe said on the day of the official launch that, "we have made arrangements for the management and long-term success of the Hambantota Port. The Sri Lankan and Chinese joint venture, which has taken over the management of this port, and its operations, will ensure an additional port in the Indian Ocean."

The Sri Lankan side is highly confident in the future operations of the Hambantota Port, so are the Chinese.

"We are aiming to turn the Hambantota port into a major hub connecting neighboring countries, as well as the rest of the world. That is the national vision of Sri Lanka and it is also our mission as an operator," Deputy General Manager of CM Port, Hang Tian, told Xinhua in a recent interview.

Hang said, "we strongly believe that the Hambantota Port will play a more important role in Sri Lanka's shipping industry than the Colombo Port, since the former is located closer to the international shipping route. CM Port will apply their advanced experience of running ports in Shenzhen, China, to the Port of Hambantota."

Twenty kilometers north of Hambantota, lies the construction site of the fourth section of Sri Lanka's Southern Highway Extension Project. On a daily basis, Sri Lankan and Chinese workers hustle and bustle together to build the highway, while precast beams are piled up on the ground. One after another, bridge piers are being erected with parts of the bridge floor which have already been well laid.

"We have finished half of the overall work this year despite elephants, peacocks and monkeys living in the jungle close to the construction site causing some difficulties to our work," Yang Senyan, the Contractor's Representative of this CHEC project said.

Yang added, "it is clear to us that the wildlife is of great value to both human and nature, therefore, in order to reduce the impact of construction on the local wildlife, we built two special bridges as part of our project, with the space beneath the bridges left for the animals to ramble from one side to the other."

Sixty kilometers west, is the first section of the Southern Highway Extension Project. With mountains, gullies and swamps, the condition of the terrain here is much more complicated than the fourth section of the project.

Zhou said many of the construction materials and equipment were washed away and the culverts under construction were also severely scoured. The project was forced to be suspended for several days due to the torrential rains.

"However, we quickly adjusted ourselves to the restoration work following the rain. By the end of the year, we have accomplished more than 50 percent of the workload in the project. Even though we ran into many difficulties this year, we have successfully turned the tide," Zhou said.

From Matara to Hambantota, the Southern Highway Extension Project is divided into four sections, all contracted to Chinese companies.

The Sri Lankan Road Development Authority's senior Project Director of the Southern Highway Extension Project, R. M. Gamini, told Xinhua that the construction of the Hambantota Highway was progressing well and they hoped to finish it by the end of 2019.

He said this Highway would connect many parts of the country such as the Eastern Province, the Uva Province and even other Southern districts.

"This Expressway will benefit the local communities as it will ease the movement of goods. The expressway will also help vendors along it to transfer their goods to Colombo within a short period of time and this will improve their livelihoods," Gamini said.

Industrial zone: From here to the future

The Port serves as a hub of cooperation between Sri Lanka and China in Hambantota, and the Highway will provide essential infrastructure support for the area.

China and Sri Lanka are also eyeing cooperation on the Industrial and Logistics Zone in Hambantota.

China's Ambassador to Sri Lanka Yi Xianliang told Xinhua, "in the future, China will continue to push forward cooperation with Sri Lanka on the Zone."

In January, the foundation stone of the Sri Lanka-China Logistics and Industrial Zone was laid in Hambantota, and an office for attracting investments for the Zone was established there later in November.

Currently, the CHEC is negotiating with the Sri Lankan government on the development of the Zone, and both parties are now seeking potential investors to join the Zone. More than 30 enterprises have visited the Zone and expressed their willingness.

The Sri Lankan cabinet has approved the state-run utility, the Ceylon Electricity Board to jointly develop a 400-megawatt liquefied natural gas power plant in the Zone with the China Machinery Engineering Corporation.

According to the proposal, the Sri Lanka-China Industrial and Logistics Zone, covering an area of 50 square kilometers, will not only provide basic shipping services, but also embark on port-related industries, such as refining and sea-product processing industries.

Sri Lankan Ports and Shipping Minister Mahinda Samarasinghe believes with the Port of Hambantota being the start of Sri Lanka-Sino cooperation in the region, a promising future lies in the Zone.

"There will be several industrial zones in the Hambantota district as well as other selected districts where we are expecting Chinese companies to set up, invest and contribute further," he said.