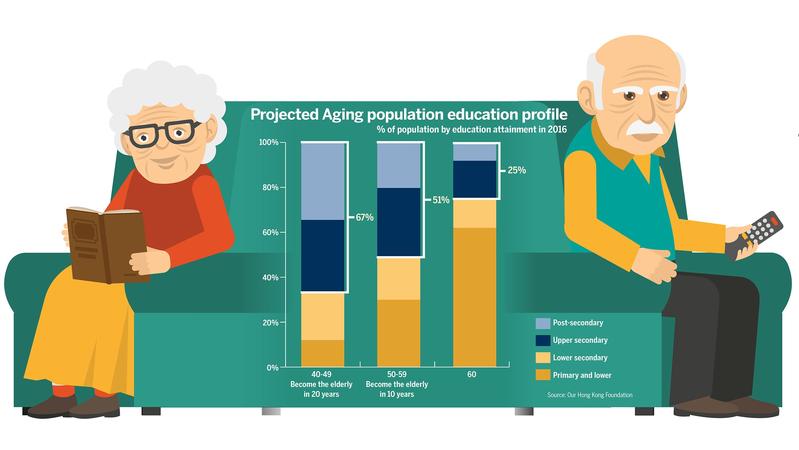 Hong Kong scrambles to cope with one of the most rapidly aging populations in Asia. It is also struggling to update the technology to improve life for the elderly. Gerontology — the study of aging — focuses increasingly on the quality of life, rather than the quantity of life, measured in years.

Gerontech, a relatively new but advancing technology, aims to make life easier and pain free for the elderly. Hong Kong lags in facilitating and adopting innovations in gerontology. The agencies for various elder-care services lack coordination, despite the rapidly “super-aging” population challenge. 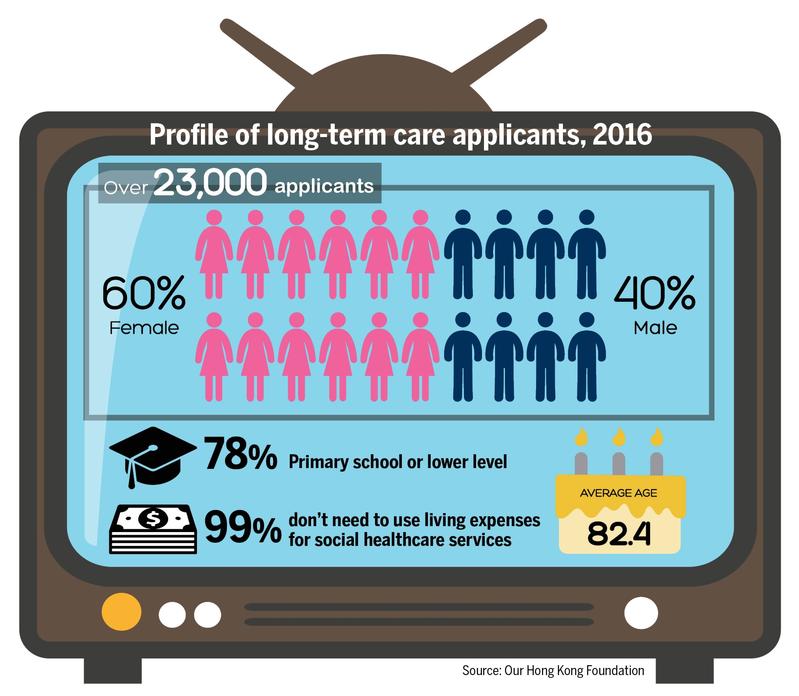 Samuel Hui built a sit-down shower device to help the elderly like his grandmother. She couldn’t use standard showers any more. There was mass market interest in the design. But Hui did not seek funding in Hong Kong, because of the convoluted bureaucratic red tape. He feared his invention might die of old age before it could source funding.

Despite being incubated in the Hong Kong Science Park, where his company was allowed a one-year rent-free office space, Hui submitted funding proposals to Singapore, with a promise to relocate part of the business there. “For a startup, situations change week-to-week and month-to-month. If you have to wait six to nine months, you’re already dead,” Hui lamented.

Hui’s sit-down shower invention was engineered for ease of use. The elderly can shower independently, in privacy. It could help prevent disputes between caretakers and the elderly. Nursing homes sometimes cut shower times to avoid the hassle of helping the elderly shower.

Hui showcased his shower invention at Hong Kong’s first Gerontech and Innovation Expo for the “silver-hair market” last June. Hong Kong authorities know that much of their equipment for the elderly is outdated. Hui’s prototype was well received. The expo brought him local and foreign orders, but he still faces the resource challenges of talent, facilities and government support.

The need to update elder-care equipment with innovative technology opens new opportunity for entrepreneurs and developers. Consultancy company Ageing Asia reported in 2015 that the “silver-hair” market in Asia-Pacific would reach US$3.3 trillion. It ranked Hong Kong as the second highest potential among 15 Asia-Pacific countries and regions, ahead of Singapore and Japan.

Apart from the difficulty of securing startup funding, Hong Kong has a laggard “government authorized list” restricting the furniture and equipment subsidized nursing homes can buy. This rigid process retards adoption of life-enhancing technology for the elderly. Far from being quick to update best practices, Hong Kong falls behind. 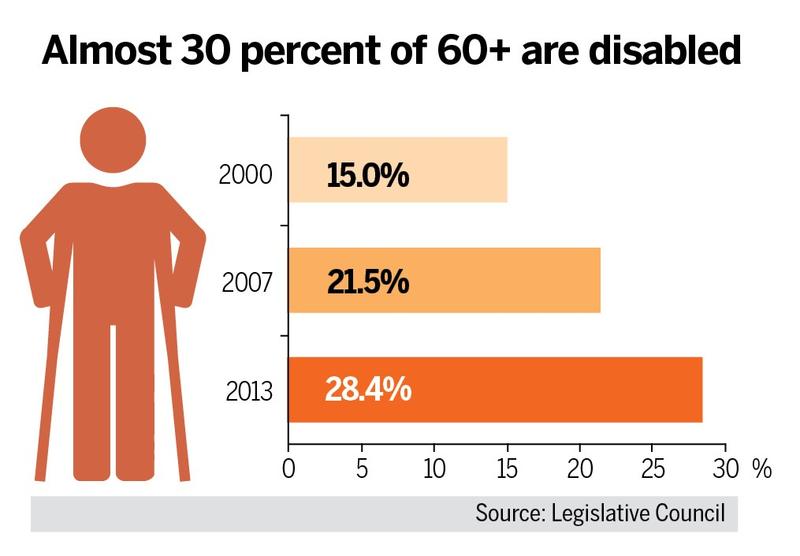 Bedsores are a common problem for elderly bedridden patients — but only recently has the hi-lo bed and the ripple mattress for preventing bedsores been added to this authorized list. “It’s not a question of to do, or not to do it; rather, it’s a question of do it fast or not,” said Stephen Wong Yuen-shan, head of public policy at Our Hong Kong Foundation, which released a research report on gerontech development. Wong sees technology to serve the aging population as a huge opportunity.

Wong notes that Hong Kong’s medical system is hospital-oriented. It can’t provide enough hospital resources to cope with a fast-aging population. Preventive and primary care facilities are needed outside institutionalized care, to compensate for what hospitals don’t cover.

For the younger, healthier group between 65 and 85, Wong sees a growing demand for preventive and diagnostic devices. Those over 85 will need assistive technology for mobility. While the tech trend is “inevitable”, he stressed, the business sector and nursing homes have to re-orient to elderly technology solutions. 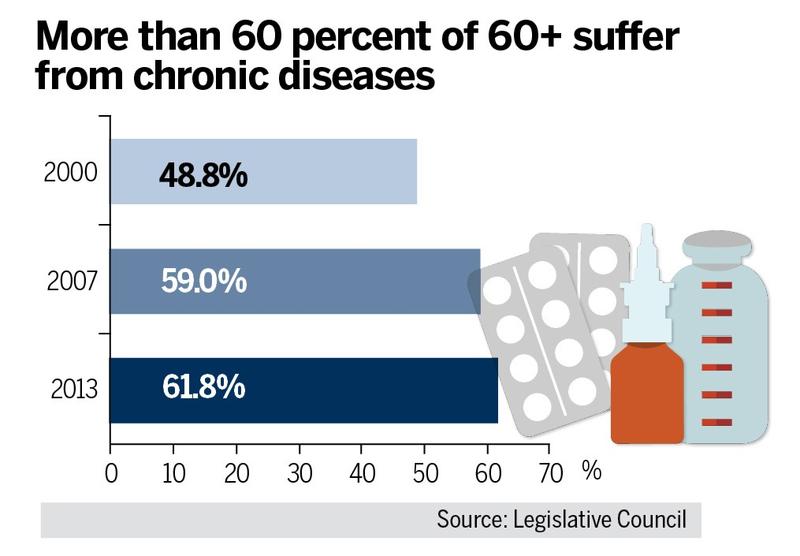 Wong suggests the government expand the scope of its HK$2,000 annual health-care voucher for the elderly. Old folk should be able to use the vouchers to buy preventive gerontech products, or assistive technology — even “healing pets” — like Paro, the therapeutic robotic baby seal from Japan, used at the Jockey Club Centre for Positive Ageing (JCCPA).

Chua Hoi-wai, chief executive of HKCSS, says in addition to help allocate funds, it will provide gerontech update recommendations for the government’s furniture and equipment list, from tests of products by the nursing homes and other NGOs. 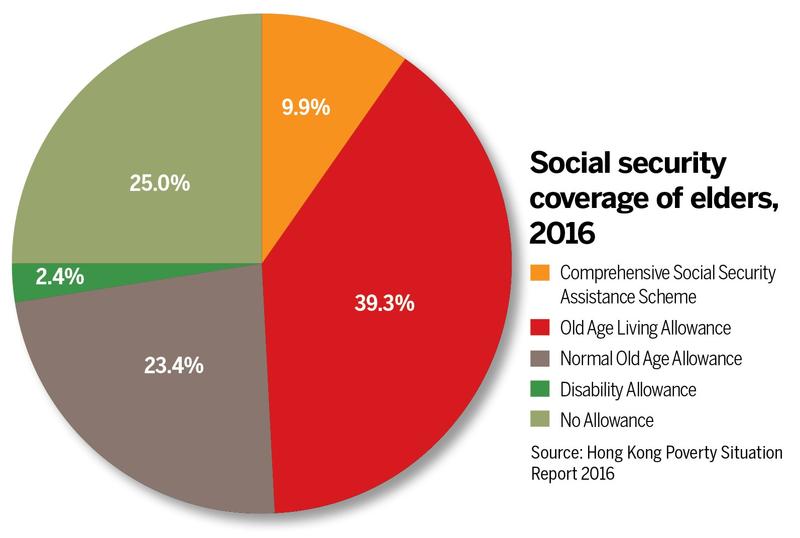 “We are building up the awareness of gerontech products,” said Chua. “That will not only lead to a revamping of the government’s furniture and equipment list but also make the city’s charitable groups and foundations aware of the changes. We hope that will generate more funding for those in need,” Chua added.

Hui, one of the new wave of gerontech developers, found a factory in Dongguan, Guangdong province to assemble his Sit and Shower units. He faces a tight deadline to ship the units to Singapore this spring, despite more design tweaks. He recently added a toilet function to the shower device, to address bowel control issues for the elderly, within the space restrictions of most nursing homes.

Hui says Hong Kong has “a lot of good executors” oriented to manufacturing, but lacks creative thinking. Innovative, problem-solving design engineers are in short supply. “Hong Kong doesn’t have a domestic gerontech industry; the few players here are from Japan.”

Last year’s Gerontech and Innovation Expo was attended by 43,000 people over three days. There were 110 companies with a range of products. Half of these were local startups with homegrown innovations.

In 2014, the Elderly Commission was tasked to formulate an Elderly Services Programme. The commission released its plan in July 2017, proposing 20 recommendations for the care and lifestyle of the elderly. More effective use of information technology by older folk and caregivers topped the agenda

Chua says the objective is to engage all stakeholders: government, foundations, the elderly, caregivers and the youth. HKCSS promoted a contest with the Electrical and Mechanical Services Department, for 93 teams of secondary students to meet elderly people to discover what would make life easier for them. One team put a motor on a conventional wheelchair to improve its operations. 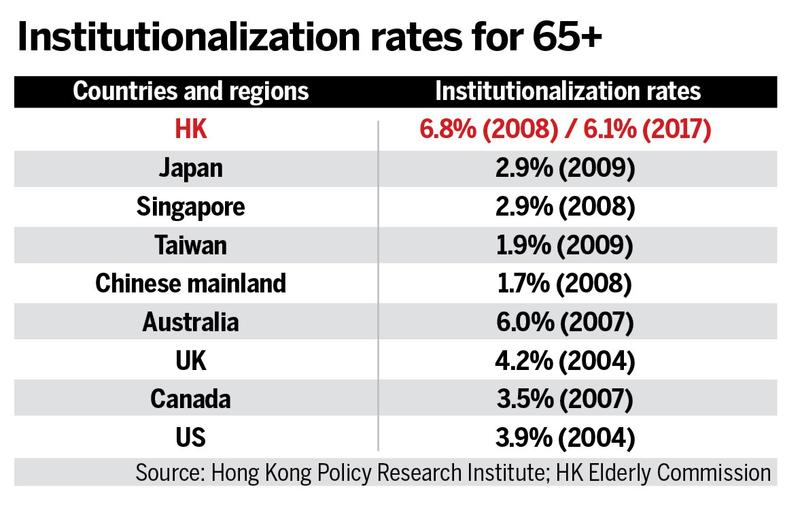 Culture Homes, a nursing home chain in the city, has adopted an anti-wandering system to alert caregivers when elderly dementia patients stray. It also uses a computerized medication distribution system which allows nurses to distribute the correct medicine simply by scanning barcodes for each resident. “Ever since adopting that system in 2011, we have had no mistakes in distributing meds,” said Eva Lo, president of Culture Homes’ elderly homes business.

Stephanie Law, who co-manages Culture Homes with her brother, said that the buildings and interiors of their current nursing homes cannot be renovated without temporary closures, which is out of the question. She said it would be easier to start a new facility incorporating gerontech equipment, such as semi-automatic shower machines and electronic beds.

Stephen Wong of Our Hong Kong Foundation noted that gerontech has been quickly and widely adopted on the mainland. Wong thinks there should be more cross-boundary cooperation. Hong Kong has advantages in primary research. The mainland excels in manufacturing.

Wong believes that the Guangdong-Hong Kong-Macao Greater Bay Area can capitalize on the aging trend. He observed that Hong Kong companies can find partners in the bay area to shorten the process of prototyping and testing, to get products to market quicker. 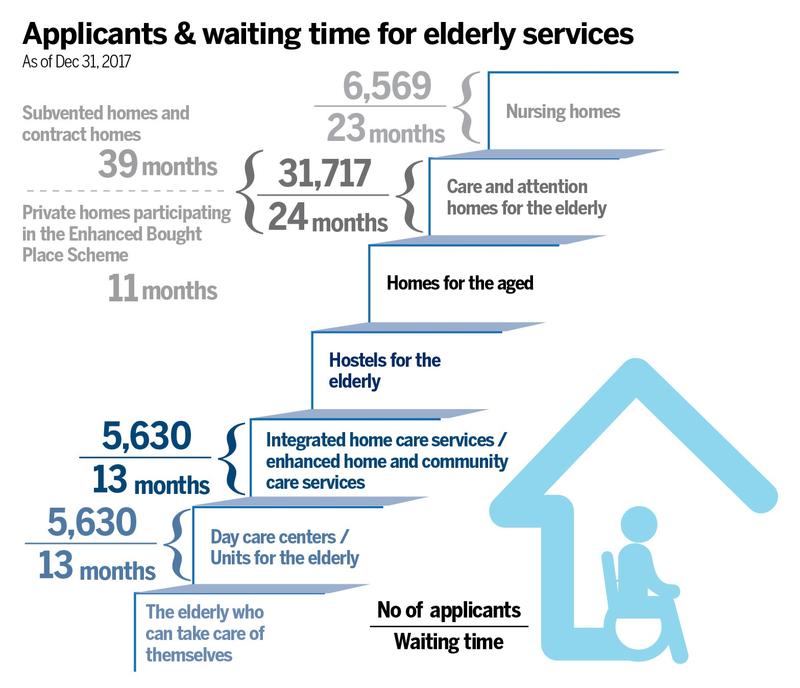 Some experts, like Professor Timothy Kwok Chi-yui, urge caution on the rush for gerontech. Kwok, of the Department of Medicine and Therapeutics and the School of Public Health at the Chinese University of Hong Kong, says many gerontech inventions are “still not mature and ignore the daily operation of nursing homes”. Kwok is also the director of the JCCPA, a nursing home mainly for dementia patients.

Kwok points to false alarms on equipment in nursing homes as a nuisance. Alarms strapped to beds or chairs set off too easily, creating extra workload for staff. He calls for designers to be pragmatic. The best devices, he says, would address tasks that are the most time-consuming or repetitive, like aids to help elderly patients move on and off beds. 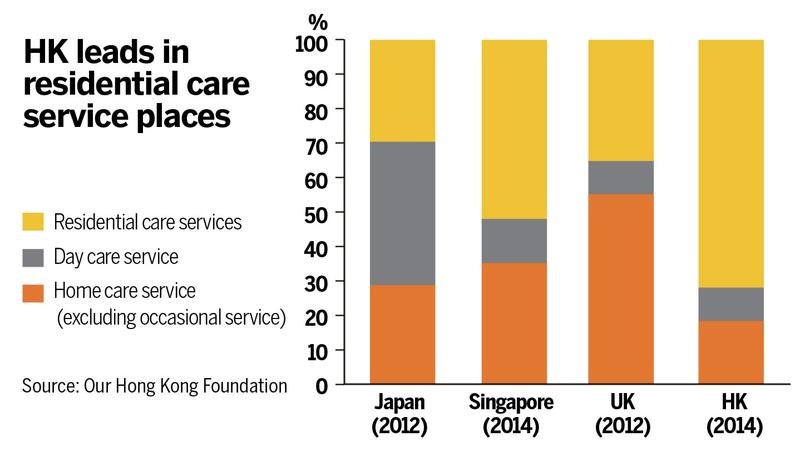 The default assumption that the graying population of Hong Kong can be left with their adult children in shoe-box sized housing, is impractical and irresponsible. Well equipped nursing homes with trained personnel and a range of elderly community support, supplemented by appropriate gerontech, would enhance their quality of life without stressing families.

By 2026, the Census and Statistics Department predicts, a quarter of Hong Kong’s population will be over 65 — 1.82 million people. Half will suffer chronic illnesses needing medication and senior care. 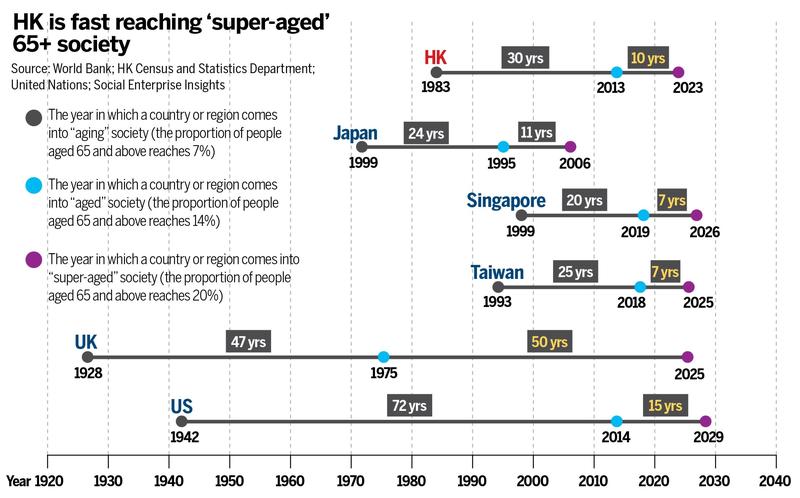 Hong Kong is already classified an “aged society”. Last year, the number of people over 65 reached 16 percent of the population, exceeding the 14 percent benchmark of an aged society. Societies of over 7-percent elderly are considered “aging”. By 2026, with more than 20 percent elderly, Hong Kong will become a “super-aged” society.

Housing and other social factors inhibit families from having kids. The fertility rate of 1.2 (2015), is way below maintaining a stable population. Hong Kong last met the population replacement fertility rate (2.1 children for every woman of child-bearing age) in 1979. Fertility has declined since. Hong Kong once had a higher fertility rate than Japan and Singapore. It has now fallen behind both and is aging faster. 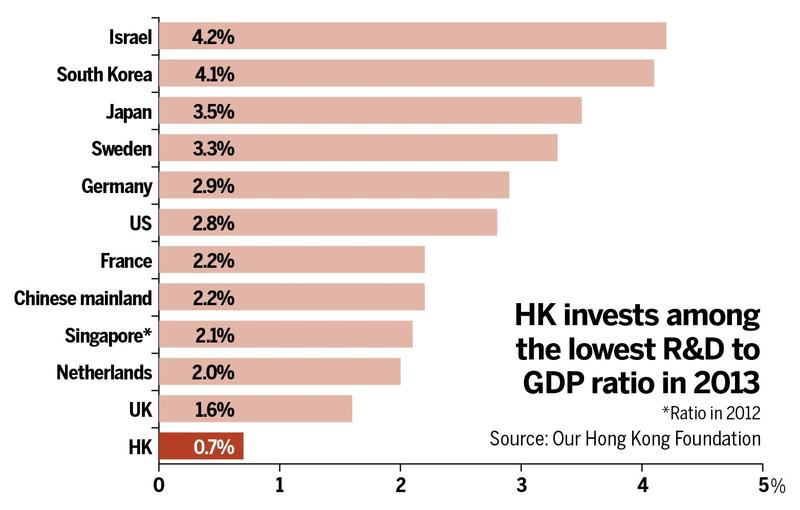 2.  Should trained caregiving staff be imported in the short term?

3.  Testing facilities for gerontech can help developers and accelerate adoption by nursing homes and hospitals;

4.  Mainland experience can be tapped. The Greater Bay Area to develop a gerontech industry makes sense.