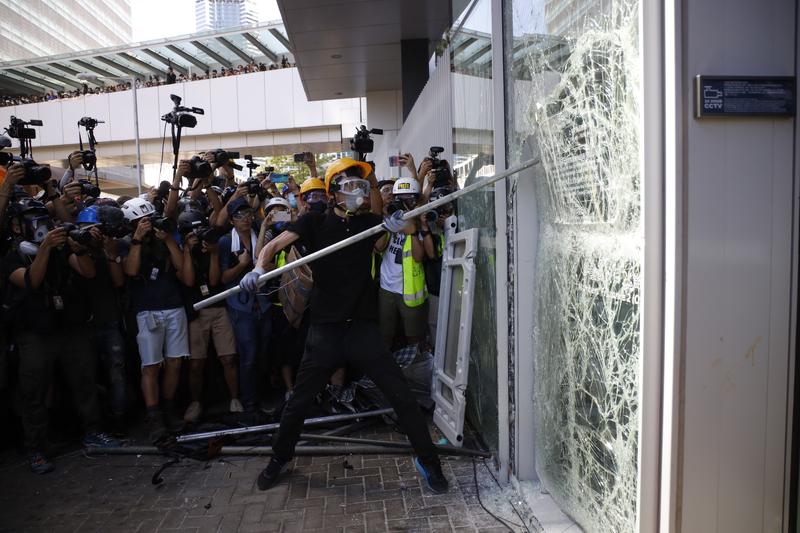 HONG KONG - Some protesters hurled objects containing unknown liquid at police officers, and 13 officers were sent to hospital for treatment, the Hong Kong police said in a statement.

At about 9.30 am on July 1, during the road blockade and charging of police cordon lines by protesters at Lung Wo Road, Tim Mei Avenue and Harcourt Road, some protesters hurled objects containing unidentified liquid at police officers.

Police officers at scene were injured and among them, some experienced difficulty in breathing and complained of swollen and itchy skin

Police officers at scene were injured and among them, some experienced difficulty in breathing and complained of swollen and itchy skin. Thirteen officers were sent to hospital for treatment.

The case was taken up by the Organized Crime and Triad Bureau. Police strongly condemn such illegal acts and will stringently follow up.

Police have warned protesters to stop using violence and disperse as soon as possible. Due to the current chaotic situation in Wan Chai and Admiralty, police have appealed to the public  to avoid these areas for the time being.

Earlier, at about 7.30 am, a large number of protesters charged police cordon lines in Wan Chai and Admiralty, prompting police to take actions to disperse the crowd.

Police have appealed to protesters not to charge police cordon lines and leave as soon as possible.

Around 4 am, a large number of protesters dashed onto Lung Wo Road, Tim Mei Avenue and Harcourt Road. They blocked the roads and obstructed traffic with mills barriers and sundries.

At the same time, some protesters stole iron poles and bricks from nearby construction site and guard rails from nearby roads.

Some protesters also pried bricks from Lung Wo Road and transported them towards Hong Kong Convention and Exhibition Centre.

Police have strongly condemned these illegal acts and warned protesters not to throw bricks or charge police cordon lines.

At round 13:00pm, some protesters started storming the Legislative Council Complext, posing serious threat to public safety and public order.