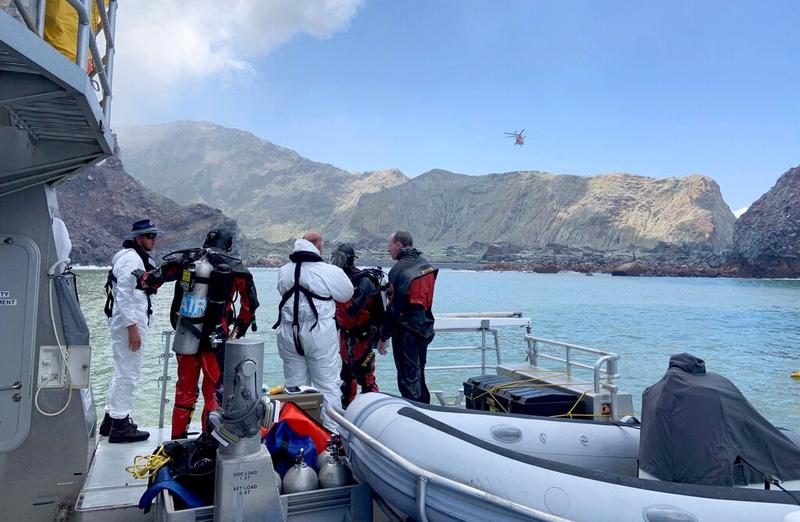 Police divers prepare to search the waters near White Island off the coast of Whakatane, New Zealand, Dec 14, 2019. A team of nine from the Police National Dive Squad resumed their search at early Saturday for a body seen in the water following Monday's volcanic eruption. (NEW ZEALAND POLICE VIA AP)

Ash and other fallout from Monday's eruption has made the sea near the island toxic and divers have to be washed clean after every completed dive. Police Deputy Commissioner John Tims called search conditions "unique and challenging."

"Divers have reported seeing a number of dead fish and eels washed ashore and floating in the water. Conditions in the water today are not optimal with between zero and 2 meters visibility depending on location," he said.

Military specialists on Friday recovered six bodies from the island in a carefully planned but risky operation. Two more bodies of victims known to have been on the island

Military specialists on Friday recovered six bodies from the island in a carefully planned but risky operation. Two more bodies of victims known to have been on the island could not be located during the four-hour operation, carried out by bomb disposal experts — six men and two women — wearing yellow hazmat suits and breathing apparatuses.

Police believe one of the missing bodies was sighted in the water close to the island by rescue teams on Tuesday, the day after the eruption. The location of the other body is not known.

Divers began the search for the bodies on Friday but were forced to stop near evening when weather conditions deteriorated. An aerial search of the island was suspended at nightfall.

The six bodies were transported to Auckland for identification.

In a statement, police said their own experts, forensic pathologists, scientists, odontologists and coroner's officials were involved in the work of identification. Under New Zealand law, the coroner must confirm the victims' identities.

Police said the process may take some time, though they are working as quickly as possible to return the bodies to their families.

Prime Minister Jacinda Ardern called on New Zealanders to observe a minute's silence in memory of victims of the disaster at 2:11 pm on Monday, exactly a week from the eruption. Ardern and her Cabinet will pause in silence during their regular meeting at Parliament in Wellington.

"Wherever you are in New Zealand or around the world, this is a moment we can stand alongside those who have lost loved ones in this extraordinary tragedy," Ardern said. "Together we can express our sorrow for those who have died and been hurt and our support for their grieving families and friends." 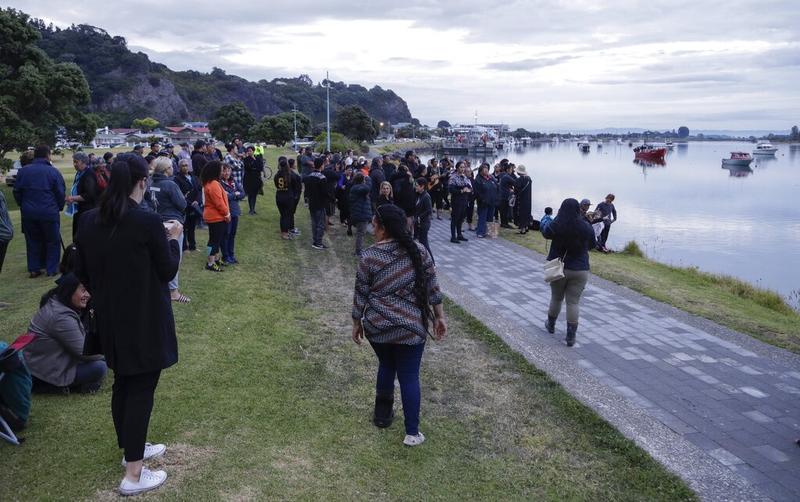 Locals sing during sun rise as they wait for the return of the victims after the White Island eruption to be returned to Whakatane, New Zealand, Dec 13, 2019. (MARK BAKER / AP)

The bodies recovered Friday are thought to be of Australians, who were most of the visitors to the island when the volcano erupted. The two last victims are believed to be New Zealanders — a tour guide and a boat captain who had taken tourists to the island.

Scientists have warned that White Island, which is the exposed tip of a mostly undersea volcano, is highly volatile, and has been venting steam and mud regularly.

The eruption Monday occurred as 47 tourists and their guides were exploring the island.

Of the 15 injured, 11 are in "very critical" condition. All 13 Australians who suffered burns have been returned to Australia, he said. 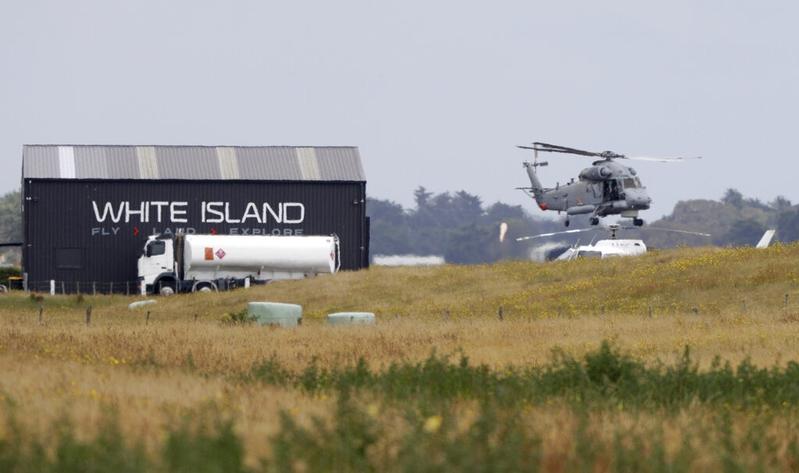 A Navy helicopter hovers at Whakatane Airport, as the recovery operation to return the victims of the Dec 9 volcano eruption continues off the coast of Whakatane New Zealand, Dec 13, 2019. (MARK BAKER / AP)

Husband and wife Pratap and Mayuri Singh were confirmed Saturday to be among survivors. The Atlanta couple are recovering from burns in Auckland's Middlemore Hospital where their conditions were listed as stable.

Specialist medical teams were heading to New Zealand from Australia, Britain and the United States. Skin banks were also sending tissue to New Zealand hospitals to use for grafts.

Authorities say 24 Australians, nine Americans, five New Zealanders, four Germans, two Britons, two Chinese and a Malaysian were on the island at the time. Many were from a Royal Caribbean cruise ship that had left Sydney two days earlier.