By Wang Zhuoqiong and Yang Jun 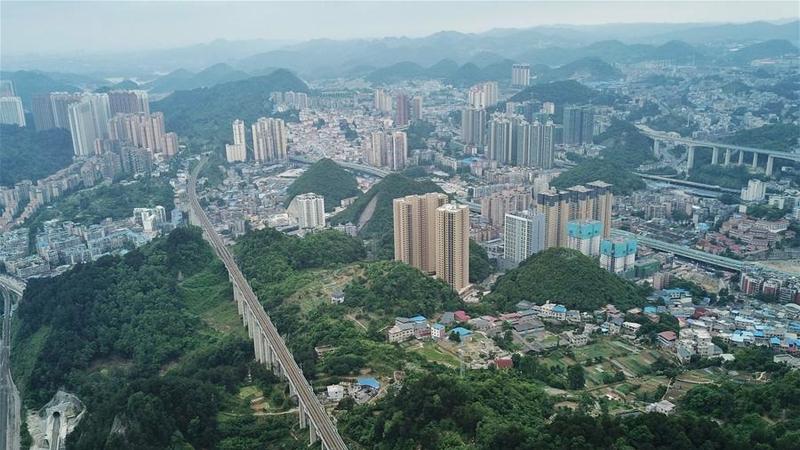 This aerial photo taken on May 23, 2018 shows the view of Guiyang, capital city of southwest China's Guizhou Province. (PHOTO / XINHUA)

Guizhou is aiming to become a major regional air hub in western China by adding international routes including flights to India and the United Kingdom and increasing domestic flights connecting big cities to the province's famous places.

Wang Yong, general manager of Guizhou Provincial Airport Group and a deputy to the 13th National People's Congress, said the province has plans to further optimize its international routes. The first direct flight connecting Guiyang to Paris will be launched on March 24 by Hainan Airlines. The flight will take place once in a week.

Sichuan Airlines will open a direct flight from Guiyang to Melbourne in May, also on a weekly basis.

Guiyang is making efforts to launch flights to London and New Delhi this year while increasing flights to Incheon and Osaka, as well as adding flights to Macao, operated by the Macao Airlines.

In the first two months of this year, international flights including routes to Milan and Bali Island were launched at Guiyang airport.

Last year Guiyang airport saw the launch of flights to Moscow and San Francisco via Hong Kong, and to Los Angeles. Overall its international routes have reached 20, with 562,000 international travelers passing through the airport, a year-on-year growth of 22.81 percent.

"Guizhou needs to open wider to the world while the province has become an opening-up economic experiment zone," said Wang.

He said despite the province's late start if compared with other western provincial airports, Guizhou has the potential to catch up quickly by positioning itself as a regional hub.

Wang said: "We have to find destinations that meet our needs."

For example, flights connecting Guiyang with San Francisco will help in building up Guizhou as China's big data valley, echoing Silicon Valley in the United States.

Wang said Guiyang airport is considered complimentary to flights to and from Chengdu Airport and Chongqing Airport.

The recently built high-speed rail network connecting Guiyang to other aviation hubs in Southwest China has greatly enhanced the province' transportation volume. It takes only two hours from Chengdu to Guiyang by high-speed railway.

Wang said construction of Beijing Daxing Airport will have a positive impact on increased flight frequency between Guiyang and Beijing. The group is aiming to launch express flights to Beijing, Shanghai, Shenzhen and Guangzhou.

Meanwhile, the soaring growth of travel to Guizhou province has also resulted in the need to open more point-to-point flights between Guiyang and other travel destinations in Guizhou province. Currently, Guizhou has 10 regional airports including Tongren, Zunyi and Bijie.