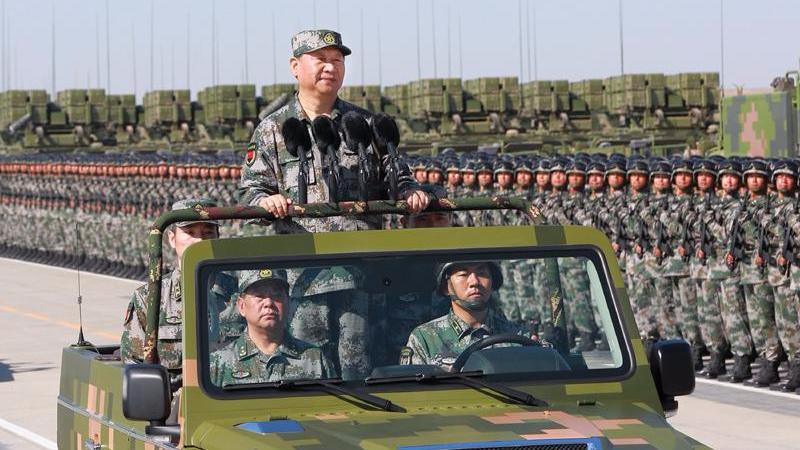 President Xi Jinping, who also is general secretary of the Communist Party of China Central Committee and chairman of the Central Military Commission, inspects military units before the parade at the Zhurihe training base in north China's Inner Mongolia autonomous region on July 30, 2017. (Li Gang / Xinhua)

President Xi Jinping urged the People's Liberation Army on Sunday to spare no efforts to build itself into a world-class military after he inspected its first field parade in several decades.

president of the People's Republic of China

Xi, also general secretary of the Communist Party of China Central Committee and chairman of the Central Military Commission, said the country is close to its goal of realizing the great rejuvenation of the Chinese nation, so a strong military is badly needed to safeguard the process.

He told officers and soldiers who had just passed review before him and the PLA's top commanders to stick to the Party's leadership, to continue serving the people, to further improve their combat capability, to deepen their reform and boost innovation.

"I am convinced that our heroic armed forces are confident and capable of defeating enemies daring to provoke us, of safeguarding our sovereignty, security and development interests...and of making new contributions to the Chinese Dream and world peace," he said.

The PLA marked its 90th birthday, which falls on Tuesday, on Sunday morning with a parade at the Zhurihe training base in the Inner Mongolia autonomous region. 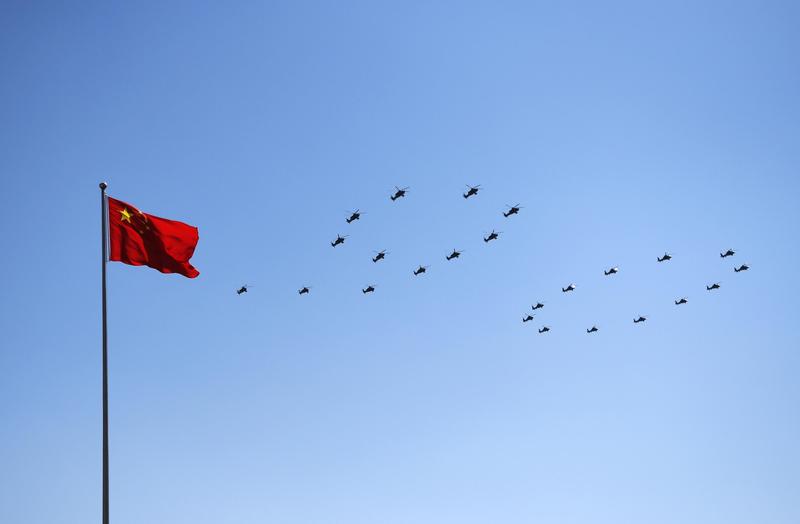 Helicopters fly in the formation of the number '90' symbolizing the epic journey of the People's Liberation Army (PLA) in 90 years during a military parade at Zhurihe training base in north China's Inner Mongolia autonomous region, July 30, 2017. (Photo / Xinhua)

In all, 12,000 troops and hundreds of large weapons and equipment, many of them never shown to the public before, took part in the grand parade, the first held by the PLA at an exercise field in nearly four decades. In 1981, a parade was held at an unidentified training base in North China and was seen by the late top leader Deng Xiaoping. The three subsequent parades, in 1999, 2009 and 2015, were at Tian'anmen Square in Beijing.

Sunday's event also was the first specifically organized to celebrate a founding anniversary of the PLA. Moreover, it represents the PLA's determination to advance to become a top world military, the PLA said.

On Aug 1, 1927, the Communist Party of China, which was founded in July 1921, led a military uprising in Nanchang, Jiangxi province, and established its own armed force in hopes of liberating the Chinese people from the hands of the Kuomintang rulers, local warlords and foreign imperialists.

The date was later commemorated as the birthday of the PLA, which soon after the Nanchang Uprising was called the Chinese Workers' and Peasants' Red Army, a title that remained for a long time. The current name - PLA - was formally adopted in 1947, two years before the founding of the People's Republic of China.

Troops at Sunday's parade had just finished field training at the Zhurihe base, the largest exercise field in Asia. The training was part of the military's annual routine exercise plan, the Defense Ministry said.

A flag guard formation of the major military branches carry flags of the Party, the People's Republic of China and the PLA on July 30, 2017. (Wang Jianhua / Xinhua)

General Han Weiguo, commander of the PLA Central Theater Command, which arranged the parade on orders of the Central Military Commission, said the event displayed the PLA's new structure and achievements made through Xi's overhaul of the military during the past few years.

He said the parade was characterized by its "closeness to combat", explaining that participating officers and soldiers were in battle uniform with their weapons and equipment in combat-ready status when going past the parade zone.

In addition to the parade, a ceremony will be held at the Great Hall of the People in Beijing on Tuesday to celebrate the 90th anniversary of the founding of the PLA, and Xi will give a speech there, according to Xinhua News Agency.