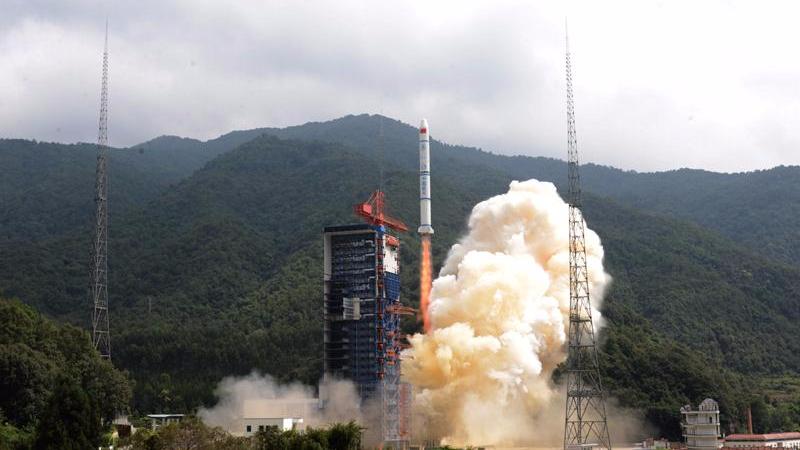 This Sept 29, 2017 photo shows a remote sensing satellite is being launched by a Chinese Long March-2C carrier rocket into an orbit from the Xichang Satellite Launch Center. China launched its first seismo-electromagnetic satellite on Feb 2, 2018 to study seismic precursors. (XIAO FEI / XINHUA)

A Long March-2D rocket launched at 15:51 from Jiuquan Satellite Launch Center, in northwest China's Gobi Desert, carried the 730-kilogram China Seismo-Electromagnetic Satellite (CSES) into a sun-synchronous orbit at an altitude of about 500 kilometers.

The satellite is named after Zhang Heng, a renowned scholar of the East Han Dynasty (25-220), who pioneered earthquake studies by inventing the first ever seismoscope in the year 132.

Zhangheng 1 will record electromagnetic data associated with earthquakes above 6 magnitude in China and those above 7 magnitude around the world, in a bid to identify patterns in the electromagnetic disturbances in the near-Earth environment, Zhao said.

Covering the latitude area between 65 degrees north and 65 degrees south, it will focus on Chinese mainland - areas within 1,000 kilometers to China's land borders and two major global earthquake belts.

Based on a CAST2000 platform, Zhangheng 1 is a cubic satellite, 1.4 meters on each side. It has a single solar panel and six booms, which will deploy and keep electromagnetic detectors more than 4 meters away from the satellite, said Zhou Feng, a senior manager with DFH Satellite Company.

It carries a high-precision magnetometer, a search-coil magnetometer and electric field probes to measure components and intensity of the magnetic and electric fields. It is also equipped with a Langmuir probe, a plasma analyzer, a GNSS occultation receiver and a tri-band beacon to measure in-situ plasma and ionospheric profile as well, Zhou said.

It also carries high-energy particle detectors, some of which are provided by Italian partners, and a magnetic field calibration device developed in Austria, according to Zhou.

China is one of the countries most affected by dynamic earthquakes, which are often widespread over terrain, high in magnitude and shallow in the epicenter.

However, scientists around the world are still unable to predict earthquakes despite efforts by various countries since the 1950s.

In recent years, more efforts have focused on monitoring seismo-electromagnetic anomalies in the near-Earth environment.

Research shows that just before a quake, tectonic forces acting on the Earth's crust emit electromagnetic waves and twist magnetic field lines. But such electromagnetic phenomena are relatively weak and need further study to be useful.

Zhangheng 1 will help scientists better understand the mechanisms of the upper atmosphere, ionosphere and magnetosphere and the temporal variations of the geomagnetic field, and thus accumulate data for the research of seismic precursors, Zhao said.

"Zhangheng 1 cannot be used to predict earthquakes directly, but it will help prepare the research and technologies for a ground-space earthquake monitoring and forecasting system in the future," he noted.

Shen Xuhui, deputy chief designer of Zhangheng 1, said it will gather enough data to build models of the Earth's geomagnetic field and ionosphere, which are still unknown to China.

"Zhangheng 1, with a wider coverage and better electromagnetic environment from space, will be an important supplement to earthquake monitoring in Qinghai-Tibet Plateau and sea areas that cannot be fully covered by the ground observation network," said Shen, also chief engineer of the Institute of Crustal Dynamics of the CEA.

It will have access to more earthquake data, which will help identify patterns in pre-quake changes in the ionosphere via statistical analysis, Shen added.