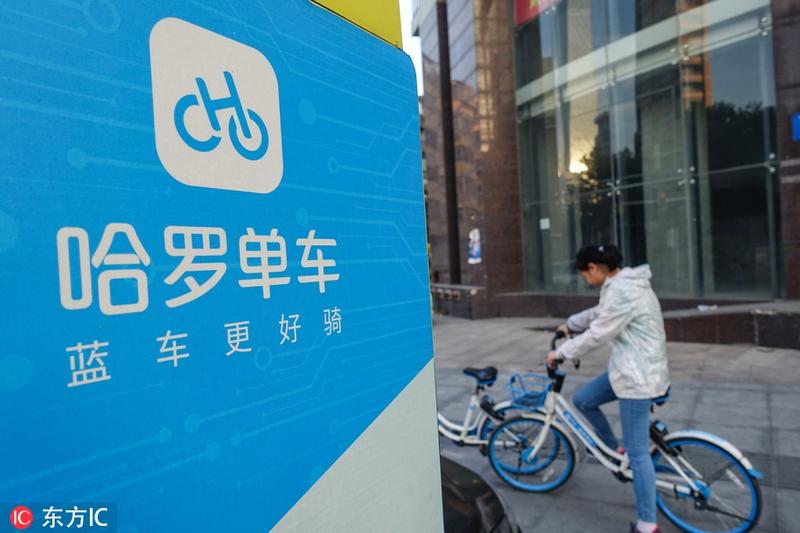 This Oct 3, 2018 photo shows a woman riding a bicycle from Hellobike on a street in Zhenjiang, East China's Jiangsu province. (PHOTO / IC)

Alibaba-backed bike-sharing startup HelloBike has announced that a single trip will cost Beijing riders 1 yuan (US$0.15) for 15 minutes, up from the usual 1 yuan for 30 minutes. This means that the firm has nearly doubled its fees.

The bike rental fare hike may help companies ease the pressure to turn profitable. However, bike-sharing platforms may also face problems such as the loss of many users.

"As the leading bike-sharing platform Ofo was reportedly struggling financially since the second half of 2018, competition among top-notch platforms is less fierce now," said Sun Naiyue, an analyst at Beijing-based internet consultancy Analysys. "The previous seemingly utopian model has already been subject to skepticism over its ability to turn a profit, making investors wary of shared bikes. Thus bike-sharing companies need to seek new options to become profitable."

"Companies need to seek refined operations to reduce the cost and then offer better services to retain users," Sun added. "The bike rental fare hike may help companies ease the pressure to turn profitable. However, bike-sharing platforms may also face problems such as the loss of many users. As the ride costs the same or even higher than the bus, shared bikes may lose certain advantages."

During the past few years, a bike-sharing boom had swept across China, with colored dockless bikes taking over major cities and offering convenient rental services via smartphones. And the rapidly-growing sharing trend has seen rounds of ebbs and flows amid the hot competition.

"The bike-sharing sector is now going through a downsizing phase, requiring better operational capabilities as well as more investment in high-quality products," said Raymond Wang, a partner at the consultancy Roland Berger.

"Bike-sharing actually provides a choice for users' short trips, catering to their specific demands," Sun added. "Despite the current crisis, the bike-sharing industry will continue to grow in the future."