Redefining the rules of attraction

Editor's note: As the People's Republic of China prepares to celebrate its 70th anniversary on Oct 1, China Daily is featuring a series of stories on the role regions have played in the country's development and where they are today.

Stem cell researcher and entrepreneur Lu Zeping said he was fortunate to become the first person to gain a Tianjin hukou－or residential certificate－under the Haihe Talent project started in May last year.

"Tianjin's research capacity and friendly business climate have given me the confidence to stay here."

Lu is deputy general manager of VcanBio, a market leader in the stem cell storage business. He said the city's decision to grant him a residential certificate indicated that Tianjin wanted to be at the forefront of stem cell research in China.

"Tianjin's research capacity and friendly business climate have given me the confidence to stay here," Lu said.

VcanBio has preserved more than 400,000 samples of stem cells from 18 provinces and municipalities and provided thousands of mesenchymal stem cells for clinical use, ranking it as the top company of its type in the country.

The requirement for the residential certificate was changed to give preference to leading individuals in their field with 10 million yuan (US$1.4 million) in scientific support funding.

The age limit for the hukou was also lifted from 35 to 45 years for workers employed by Tianjin companies as researchers. Residency was also made easier for entrepreneurs.

In the cutthroat competition to attract the best business and research minds to China's major cities, Tianjin is regraded as having the most attractive policies.

About 170,000 other talented individuals who obtained residential certificates have joined Lu in Tianjin over the past 14 months.

Tianjin is home to 170 national-level research institutes. The city has seen its innovation index hit 80.75 percent, ranking third in the country for the past 16 years, according to the Chinese Academy of Science and Technology for Development.

Not only is Tianjin known for its innovation and competitiveness and ability to attract overseas and Chinese talent, it has also maintained its position as North China's industrial hub.

A long list of firsts were manufactured in Tianjin, including the country's first television, bicycle, wristwatch and bus. It is also home to the country's first international container port, and the first Ferris wheel suspended on a bridge, the 120-meter-high Tianjin Eye.

A complete industrial chain of airplanes, helicopters, drones, rockets and satellites has evolved in Tianjin. Up to one sixth of the country's crude oil is produced in the city, equivalent to 30.85 million metric tons annually.

It is the second largest industrial fund in the world designated for this sector, and is expected to drive rapid growth in the industry, according to a local research institute.

The companies in the intelligent manufacturing sector now account for 20 percent of the city's large companies, defined as those with annual income above 20 million yuan. 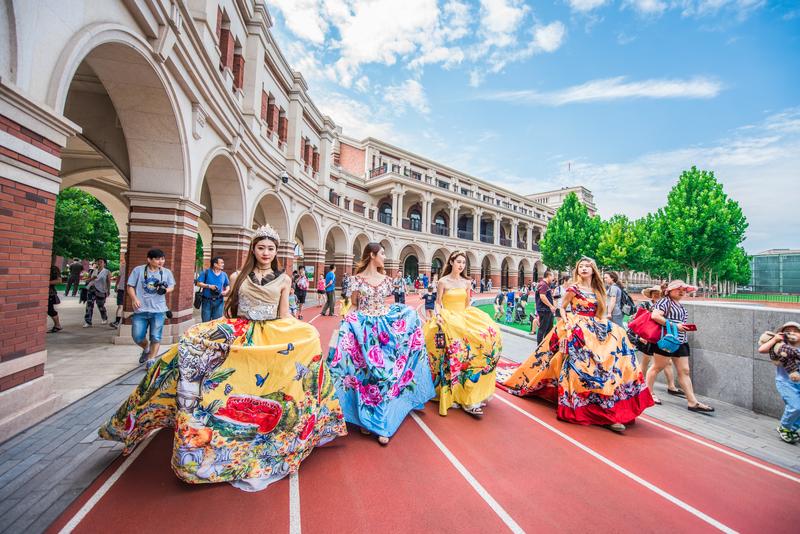 Fashion models at a promotional event in Tianjin's Five Great Avenues area. There are more than 400 European-style buildings in the area, which has become a major tourist attraction. (WANG YEMING / CHINA DAILY)

Their contribution to the local economy in the first half of 2019 accounted for 30 percent of the city's 400 billion yuan in industrial added value. The intelligent manufacturing sector experienced double digit growth over the period.

The city has upgraded a number of local factories into smart ones and production lines into digitized ones.

The world's first 64-core chip for computer processors was also developed in Tianjin and has been widely applied in the market.

During the first half of this year, the city's GDP grew by 4.6 percent to top 1 trillion yuan.

According to Jin Xiangjun, vice-mayor of Tianjin, the city's GDP is expected to continue its momentum in the second half of the year.

Zhang Guoqing, mayor of Tianjin, said: "Nowadays, Tianjin is riding on the tide of the integrated development strategy among Beijing, Tianjin and nearby Hebei province."

To date, more than 4,000 projects worth 700 billion yuan have moved from Beijing to the coastal city.

The lower costs for businesses are pushing Tianjin up the rankings of Chinese cities with the best business environments, according to a survey by China Central Television late last year.

From 2017-19, company taxes in Tianjin were slashed by 105.7 billion yuan, with the Tianjin government cutting local taxes by 62.3 billion yuan.

Foreign companies are upbeat about Tianjin.

Airbus Tianjin General Manager Frank Schreiber said that Airbus has a lineup of A320 and A330 products in Tianjin. 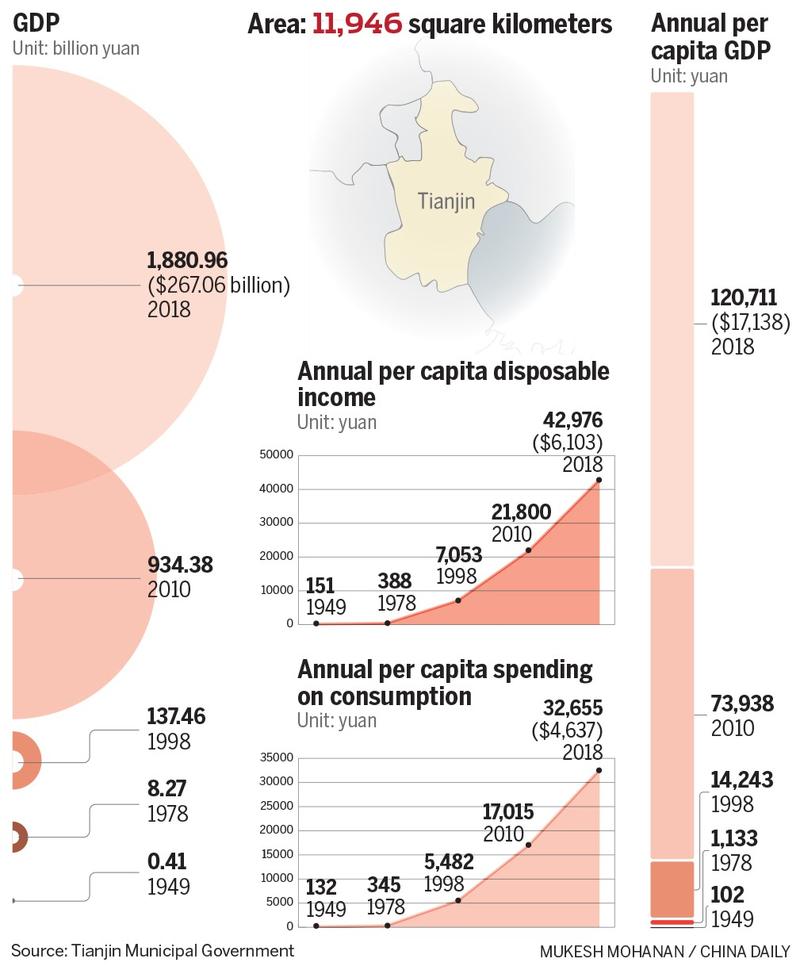 The company will increase its assembly capacity of A320 planes from four to six per month next year, with the A350 expected to also join the Tianjin assembly line.

Schreiber said the Airbus and Tianjin partnership was a "win-win".

Timothy Stratford, chairman of the American Chamber of Commerce, said, "Since the 1980s, I have seen many foreign companies invest in Tianjin, and now about 180 US companies have businesses in Tianjin."

Qiu Zhongqiang, Procter & Gamble vice-president, said over the company's 25 years in Tianjin it had witnessed an improvement in legal protection for companies.

READ MORE: On a mission to grow human organs in space

"The city has made resolute efforts and given support to cracking down on illegal and fake goods, accelerating the intellectual property rights protection," Qiu said. "The ever-improving business environment and measures have made it easy for companies to launch businesses in the city."