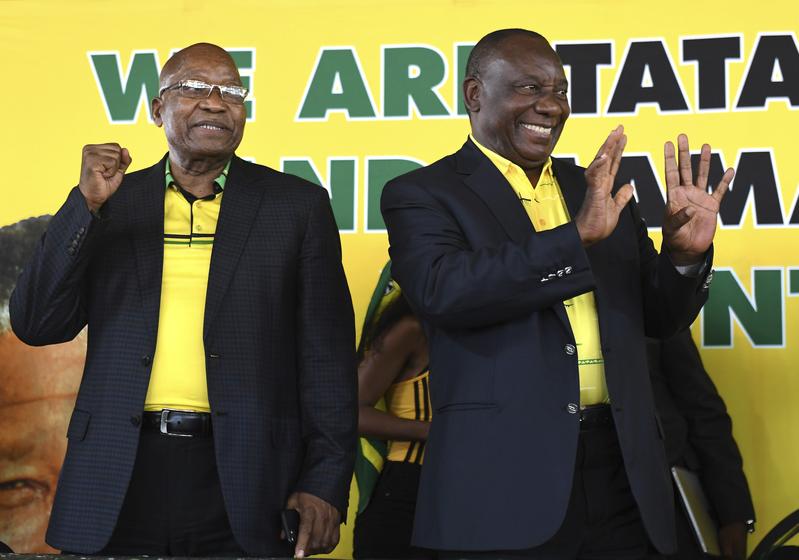 JOHANNESBURG — Jacob Zuma was in disgrace last year, a South African president forced from office by scandal and then in court on corruption charges. He is now in the midst of a remarkable makeover, wooed by a ruling party that recognizes his enduring appeal to some supporters and is anxious to paper over divisions ahead of elections this year.

Jacob Zuma has not announced any formal return to politics, though some supporters nominated him to a party list of possible candidates for parliament

The image of Zuma and successor Cyril Ramaphosa, smiling and cutting cake together at an African National Congress party event, is also generating concern about how far Ramaphosa's anti-corruption drive can go after years of alleged malfeasance in the Zuma administration.

"We're getting along very well," Ramaphosa said Tuesday at the commemoration of the 107th anniversary of the party's founding. It was held in KwaZulu-Natal province, a stronghold of support for Zuma and key to the ANC's electoral fortunes. Ramaphosa said the former president had a role to play in a party struggling to recover the popularity it enjoyed when it took power at the end of white minority rule in 1994.

Two days later, in an appearance where Zuma was not present, Ramaphosa gave a critical assessment of how the country was run under the former president. The past few years were "really difficult" as institutions were weakened, he said.

It is a balancing act for Ramaphosa, who narrowly defeated Zuma's ex-wife in a contest for the ANC's presidency in December 2017 before becoming the country's president in February. He vowed to pursue those involved in the alleged looting of state coffers, reconstituting boards of many state-owned enterprises, dumping problematic Cabinet ministers and appointing a new chief prosecutor.

However, some Zuma loyalists, including ANC secretary general Ace Magashule, retain influence and there is growing skepticism about whether the divided party can fully reform.

Ramaphosa has "wielded his broom in the relatively short time that has been available to him. But the situation remains dire and his greatest problem probably resides in the extent of support that he enjoys in the ANC," said David Lewis, executive director of Corruption Watch, a non-profit group.

Lewis predicted that efforts to combat corruption will be a major campaign issue and that the ANC's efforts to project unity could backfire.

"You'll pay a price for claiming unity when manifestly that's not the case," he said.

Zuma, meanwhile, has raised his profile, joining Twitter and posting chatty videos in which he argues that the state should pay his legal fees. The folksy 76-year-old, who has danced outside his court appearances to the delight of supporters, also has made a deal to record anti-apartheid songs, upsetting some critics who say public money shouldn't be spent on Zuma's musical hobbies. 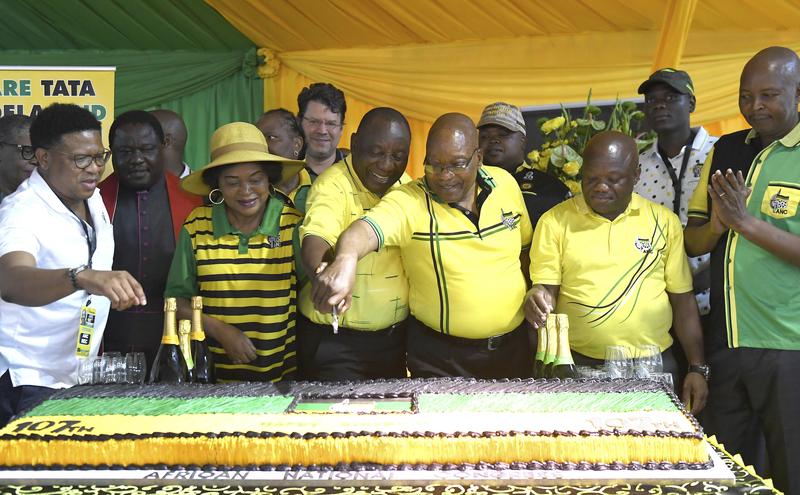 Some South Africans were especially vexed by Ramaphosa's deference toward Zuma at the party's anniversary. The president did the public speaking, but the former president got the most applause.

"We must assess whether there is a change in our nation," said Mmusi Maimane, head of the opposition Democratic Alliance party. He tweeted a photo of Ramaphosa, Zuma and parliament speaker Baleka Mbete cutting the cake adorned with icing in the ANC colors of gold, green and black.

"Ramaphosa's bromance act goes beyond tactical politics," commentator Max du Preez tweeted. He expressed concern about the "hero worship" of Zuma, who last year was told to quit by his own party following revelations that a business family close to him allegedly influenced government appointments and state enterprises for its benefit.

A commission led by a Constitutional Court judge is investigating the extent of what South Africans call "state capture," while Zuma is separately on trial for reinstated corruption charges dating from a late 1990s arms deal, when he was vice president.

Zuma, who has denied wrongdoing, has not announced any formal return to politics, though some supporters nominated him to a party list of possible candidates for parliament. The list has yet to be published.

READ MORE: Zuma agrees in principle to resign as president in 3 to 6 months

The ANC, which was the main movement against apartheid, opened its election campaign on Saturday, seeking to convince voters that it has made their lives better since the painful era of racial repression. The vote is expected in May, though a date has not been announced. The ANC won 62 percent of the vote in general elections in 2014, but lost several major metropolitan areas to the opposition in municipal elections in 2016.

Ramaphosa said the ANC, whose most revered member was Mandela, is rebuilding after years of tumult.

"The mojo is coming back," the president said on a visit to New York in September, according to South African media.

And so, at least until the election, is Zuma.