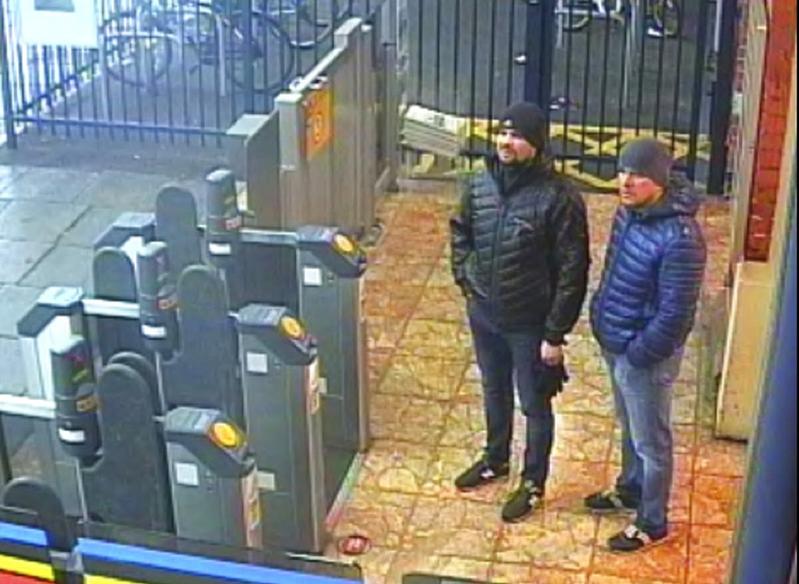 This still taken from CCTV and issued by the Metropolitan Police in London on Sept 5, 2018, shows Ruslan Boshirov and Alexander Petrov at Salisbury train station on March 3, 2018. (METROPOLITAN POLICE VIA via AP)

LONDON — Britain charged two alleged Russian military intelligence officers with the nerve agent poisoning of ex-spy Sergei Skripal and his daughter in the English city of Salisbury, officials said Wednesday, though authorities held out little hope of being able to bring them to justice.

The men, who entered the UK under the names Alexander Petrov and Ruslan Boshirov, are being charged in absentia with conspiracy to murder, attempted murder and use of the nerve agent Novichok, prosecutors said.

The charges deepen Britain's diplomatic feud with Moscow, which denies involvement in the attack on former Russian agent Sergei Skripal who had been convicted in his homeland of spying for Britain

Prime Minister Theresa May told lawmakers that British intelligence has concluded that the two men are officers of Russia's GRU military intelligence service.

May said the attack "was not a rogue operation" and was almost certainly approved at a "senior level of the Russian state."

The charges deepen Britain's diplomatic feud with Moscow, which denies involvement in the attack on Skripal, a former Russian agent who had been convicted in his homeland of spying for Britain.

Sue Hemming of the Crown Prosecution Service said the UK wouldn't ask Moscow to extradite the men because Russian law forbids extradition of the country's citizens. Britain has issued domestic and European arrest warrants for the suspects, meaning they can be detained if they leave Russia for another European country.

But assistant commissioner Neil Basu, head of counterterrorism at London's Metropolitan Police, conceded it was "very, very unlikely" police would be in a position to arrest them any time soon, though he said "we will never give up."

Police say the suspects, both about 40, flew from Moscow to London on Russian passports two days before the Skripals were poisoned on March 4. Basu said the passports were genuine but the men were probably using aliases, and appealed to the public "to come forward and tell us who they are."

Sergei Skripal, 67, and his 33-year-old daughter Yulia were found collapsed on a bench in Salisbury, 145 kilometers southwest of London. They spent weeks hospitalized in critical condition and are now recovering in a secret location for their own protection. A police officer, Nick Bailey, was also hospitalized.

British authorities and the international chemical weapons watchdog say the victims were exposed to Novichok, a type of military-grade nerve agent developed by the Soviet Union during the Cold War. 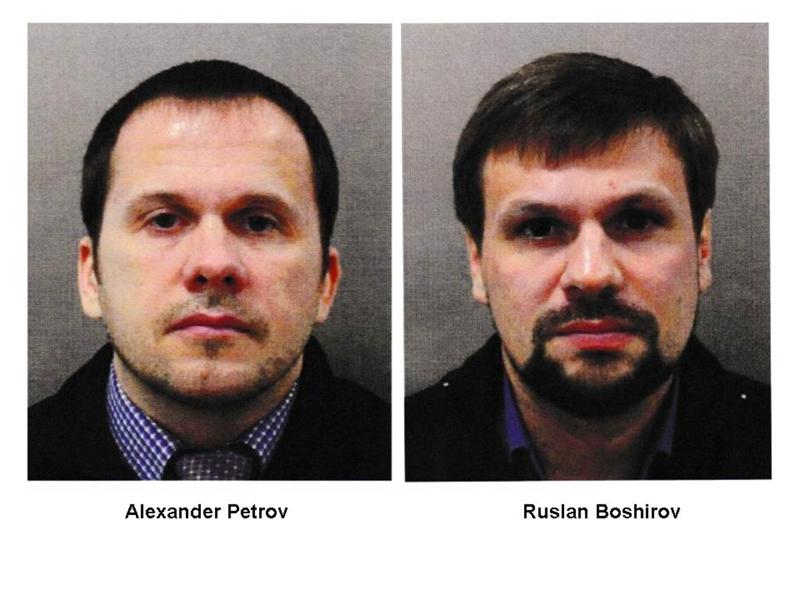 This combination photo made available by the Metropolitan Police on Sept 5, 2018, shows Alexander Petrov, left, and Ruslan Boshirov. (METROPOLITAN POLICE VIA via AP)

Britain blames the Russian government for the attack, a claim Moscow denies. The poisoning ignited a diplomatic confrontation in which hundreds of envoys were expelled by both Russia and Western nations.

Russian Foreign Ministry spokeswoman Maria Zakharova said the names and images of the suspects released by Britain "say nothing to us."

Zakharova called on Britain to cooperate with Russian law enforcement agencies on the investigation. She has criticized London for turning down Moscow's request to see the case files.

Six months after the poisoning rocked the quiet cathedral city, police gave new details about what Basu called "one of the most complex investigations" the force had ever seen.

The police force released a series of images of the suspects as they traveled through London and Salisbury between March 2 and March 4. They stayed in a hotel in London, where traces of Novichok were also found. 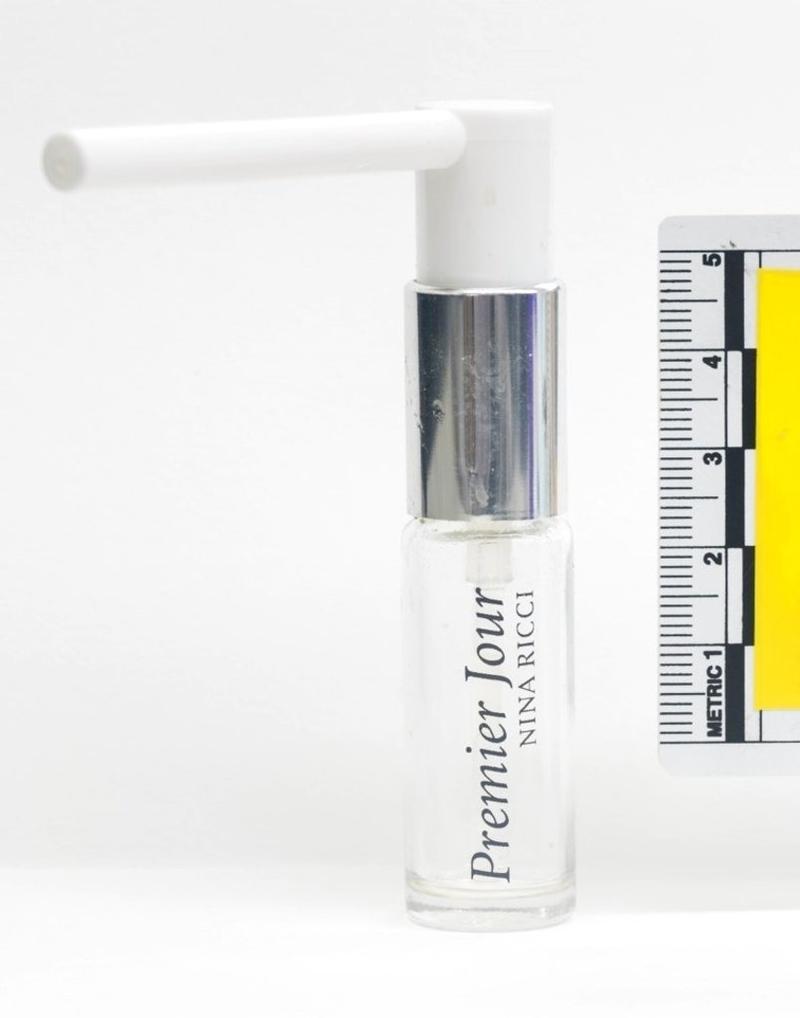 This photo made available by the Metropolitan Police on Sept 5, 2018, shows the perfume bottle and applicator recovered by police at the house of Charlie Rowley. (METROPOLITAN POLICE VIA via AP)

Police didn't link the suspects to the budget City Stay Hotel in London's east end until two months after the attack, but said people who had stayed there weren't at risk. Basu said that traces of Novichok were found in a room, but in too small a quantity to be harmful.

The suspects made two trips to Salisbury before flying back to Moscow from Heathrow Airport on the evening of March 4, hours after the Skripals were poisoned, police said.

Police believe the nerve agent was smuggled to Britain in a counterfeit Nina Ricci perfume bottle and applied to the front door of Sergei Skripal's house. 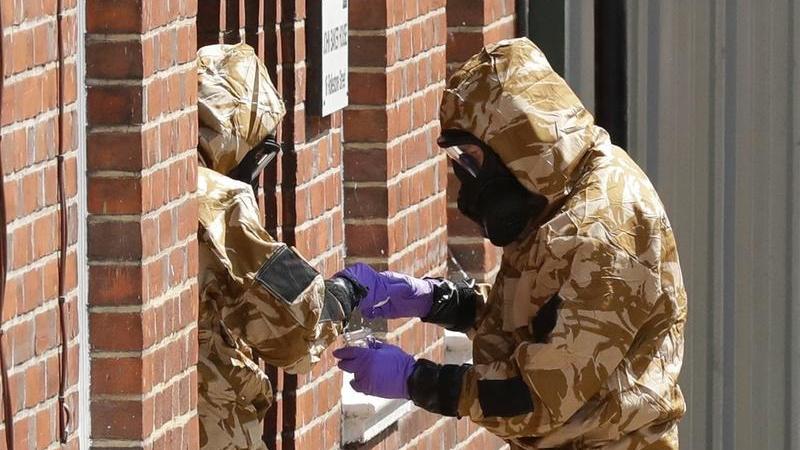 More than three months later, the bottle was found by a local man, 48-year-old Charlie Rowley. He was hospitalized and his girlfriend Dawn Sturgess, 44, died after being exposed to the contents.

The Organization for the Prohibition of Chemical Weapons confirmed Tuesday that Rowley and Sturgess were also exposed to Novichok.

Police are still trying to determine where the bottle was between the Skripal poisoning in March and its discovery by Rowley on June 27. As a result, Basu said, police weren't yet ready to bring charges in the second poisoning.