Lee Keum-seom (left), 92, from the Republic of Korea, weeps with her son Ri Sang-chol, 71, from the Democratic People's Republic of Korea (DPRK), during the Separated Family Reunion Meeting at the Diamond Mountain resort in DPRK, Aug 20, 2018. (LEE JI-JEUN / YONHAP VIA AP)

SEOUL - Some 90 families from the two Koreas were reunited in the Democratic People's Republic of Korea (DPRK) on Monday, weeping and embracing each after being torn apart for more than six decades by the 1950-53 Korean War.

The brief reunions, which will last only 11 hours, are the first in three years, and took place in the DPRK's tourist resort on Mount Kumgang after the two Koreas renewed exchanges this year following a standoff over Pyongyang's nuclear and missile programs.

The DPRK leader Kim Jong-un and the Republic of Korea (ROK) President Moon Jae-in agreed to the latest round of reunions during their first summit in April.

About 330 people from ROK from 89 families, many of them in wheelchairs, gathered with 185 lost relatives from the DPRK, embracing with tears, joy and disbelief. Some were struggling to recognize family they have not seen in more than 60 years.

Kim Gyong-sil and Gyong-yong, 72 and 71, wearing light violet traditional dress of hanbok, stood nervously staring at the entrance before their 99-year-old mother Han Shin-ja turned up. They could not speak for minutes, wailing loudly and rubbed their cheeks and hands.

"When I fled home in the war," said Han, failing to continue as she choked up with emotions.

The separated families are victims of a decades-long political gridlock between the neighbours, which has escalated over the past several years as Pyongyang rapidly advanced its weapons programs. 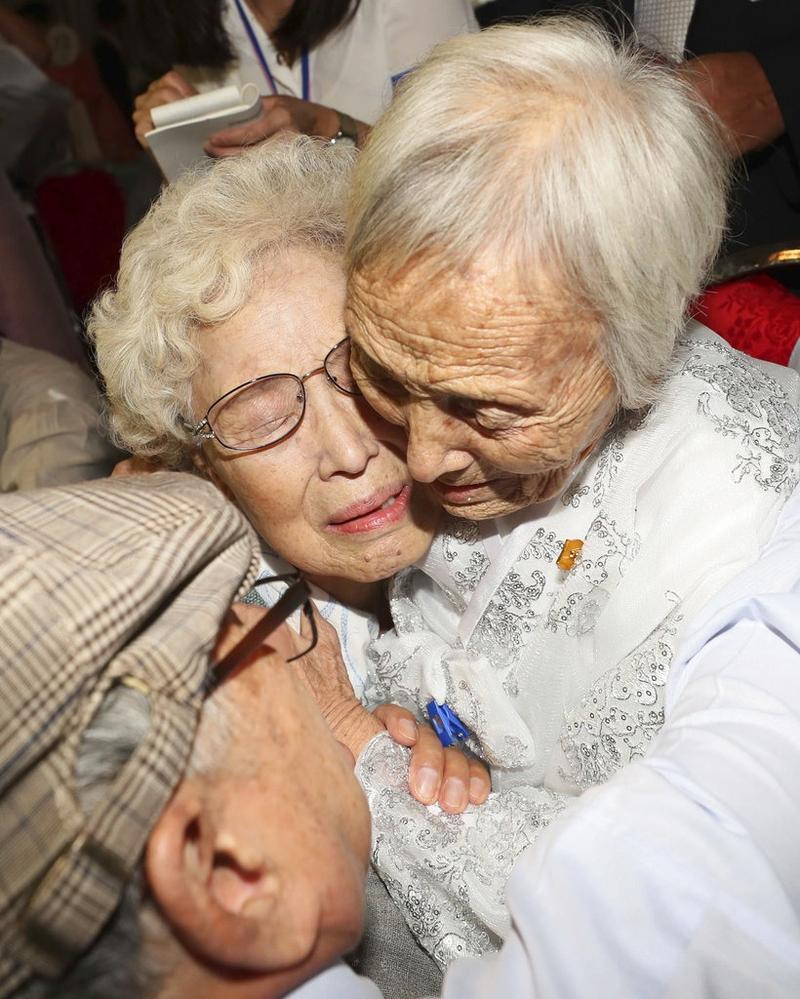 More than 57,000 ROK survivors have registered for the brief family reunion which often ends in painful farewells.

For years, Seoul has been calling for regular meetings between separated families including using video conferences, but the reunion programs often fell victim to fragile relations with Pyongyang.

During his summit with US President Donald Trump in June, Kim pledged to abandon his country's nuclear programs if Washington provided security guarantees, but the two sides have since struggled to agree on how to reach that goal.

The ROK president Moon, himself a member of a separated family from the DPRK's eastern port city of Hungnam, said on Monday that the reunions should be sharply scaled up and held on a regular basis and include exchanges of visits and letters.

"It is a shame for both governments in the South and the North that many of the families have passed away without knowing whether or not their lost relatives were alive," Moon told a meeting with presidential secretaries.

"Expanding and accelerating family reunions is a top priority among humanitarian projects to be carried out by the two Koreas."

Ninety-three families from both sides of the border were initially scheduled for a three-day gathering from Monday, but four ROK members cancelled their trip to the DPRK at the last minute due to health conditions, the Red Cross said. 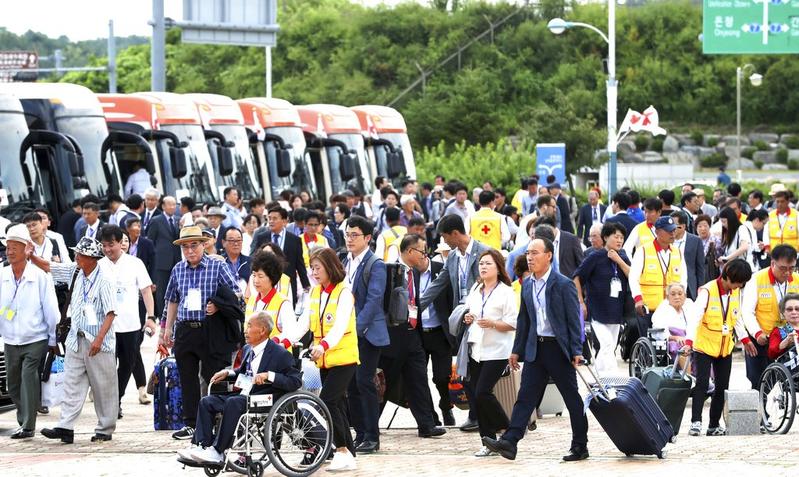 People from the Republic of Korea (ROK) leave for the Democratic People's Republic of Korea (DPRK) to take part in family reunions with their DPRK family members at the customs, immigration and quarantine (CIQ) office in Goseong, ROK, Aug 20, 2018. (KOREA POOL / YONHAP VIA AP)

Starting Thursday, there will be a meeting of another 88 groups of relatives, 469 from the ROK and 128 from the DPRK, according to Seoul's Unification Ministry.

The brief family reunions, which began in 1985, can be a traumatic experience for the aging survivors, they say. And time is running out, with many of them aged 80 or older.

The oldest ROK participating in the latest gathering is 101 years of age.

"Most participants are elderly and many of them are suffering from hypertension, diabetes and have underlying medical conditions. Ahead of the reunions, we are thoroughly checking their health conditions so that they can attend the events as planned," said physician Han Sang-jo.

Many of the family members brought gifts for their DPRK relatives. Socks, underwear, basic winter jackets, medicine, toothpastes and food are the most common items, with gifts deemed too extravagant unlikely to pass muster with Pyongyang authorities.

"I've prepared for him some household medicine including digester and headache pills, nutritional supplements as well as some daily necessaries," 76-year-old Lee Soo-nam from ROK told Reuters before meeting his older brother in the DPRK separated by the war.

"He is very old so I really want to express my gratitude for being alive for a long time."