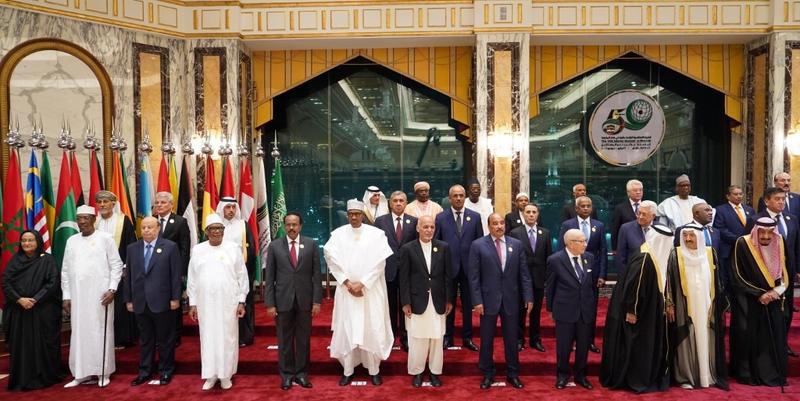 Saudi Arabia's King Salam bin Abdulaziz (right) poses for a family picture with OIC heads of state and officials at the opening of a summit of the 57-member Organization of Islamic Cooperation (OIC) in the Saudi holy city of Mecca late on May 31, 2019. (BANDAR ALDANDANI / AFP)

CAIRO/RIYADH - The Islamic Summit on Saturday reaffirmed the Palestinians' right to statehood in its final communique, Al Arabiya TV reported.

Held in Islam's holiest city Mecca along with Gulf and Arab summits, the summit of the Organisation of Islamic Cooperation reiterated the centrality of the issues of Palestine and Jerusalem to the Islamic nation, highlighting its principled and continuous support at all levels for the Palestinian people in attaining their inalienable rights including self-determination and the establishment of an independent and sovereign state.

The summit condemns any position adopted by an international body that supports prolonging occupation of Palestinian territories, including a US decision to recognize Jerusalem as Israel's capital

The summit also said it condemns any position adopted by an international body that supports prolonging occupation of Palestinian territories, including a US decision to recognize Jerusalem as Israel's capital.

It urged member countries to take "appropriate measures" against countries that move their embassies to Jerusalem.

The OIC also refused to accept any proposal for peaceful settlement that did not accord with Palestinians' legitimate inalienable rights, according to the final statement.

The OIC stressed the importance of amassing support for the budget of the Palestinian government to continue its work.

On Syria, the summit refused to accept any decision to change legal and demographic status Golan Heights, especially the US decision to recognize Israeli sovereignty over the territory.

During the summit, leaders of Islamic states discussed the ways to fight extremism and terrorism, and the issue of growing Islamophobia around the world.

The Islamic summit encouraged the United Nations and other international and regional organizations to adopt March 15 as the International Day against Islamophobia.

On March 15, a gunman killed 51 Muslims in attacks on two mosques during Friday prayers in Christchurch city, New Zealand.

At a press conference after the summit, Saudi Minister of State for Foreign Affairs Adel al-Jubeir urged Iran to comply with international law.

The three summits came just weeks after a drone strike on oil facilities in Saudi Arabia and attacks on four vessels, including two Saudi oil tankers, off the coast of the United Arab Emirates.