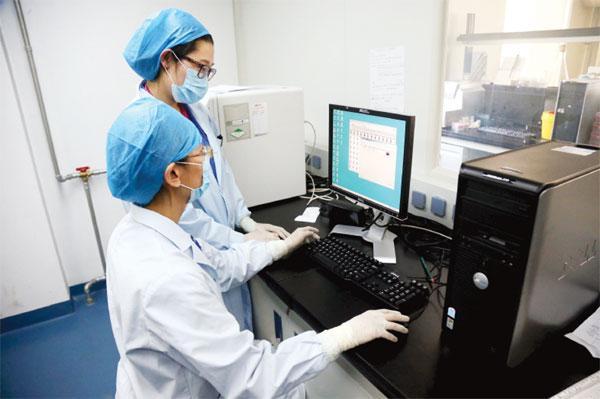 Scientists at work in a laboratory in Beijing.  (AFP)

The Chinese mainland’s spending on research and development is expected to increase 73 percent by 2020 compared with last year’s figure, surpassing the United States, according to global financial services provider Credit Suisse.

The mainland now ranks No 2 globally in terms of R&D expenditure, with US$236 billion invested last year. But the level is still about 25 percent below that of the US.

The most important driver for China’s R&D expenditure is the business sector, which accounts for over 70 percent of its total

“Assuming 7.5-percent nominal GDP growth in China, by 2020, China’s R&D expenditure will be 73 percent higher than it was in 2016. By that time, on a Purchasing Power Parity adjusted basis, China’s R&D expenditure will exceed that of the United States,” Vincent Chan, head of China Macro Research at Credit Suisse, said in Shenzhen on Friday on the sidelines of the firm’s annual China Investment Conference.

“The most important driver for China’s R&D expenditure is the business sector, which accounts for over 70 percent of its total.”

The country has set a target of increasing R&D spending to 2.5 percent of GDP by 2020.

To achieve the objective, the central government has taken a number of measures, including expanding its talents pool and offering subsidies and tax reductions.

“Once a company is recognized as a high-tech enterprise, its income-tax rate could drop from 25 percent to 15 percent. That is competitive compared to other major Asian economies,” Chan said.

The mainland is ramping up efforts to transform itself from a manufacturing hub into an innovation powerhouse. In President Xi Jinping’s report to the 19th Congress of the Communist Party of China, which wrapped up on October 24, he laid out the blueprint to turn the country into a top-ranked innovative nation with pioneering global influence in years ahead.

Nicole Yuen, head of Equities North Asia and Greater China vice chairman at Credit Suisse, said the blueprint highlighted that technological innovation and advanced manufacturing in the mainland would be the key investment themes for its equity market in future, bringing promising opportunities to investors.

“We are witnessing the beginning of a new era. Under the blueprint formulated at the 19th Party Congress, along with the progress in implementing the ‘One Belt, One Road’ and ‘Made in China 2025’ initiatives, we are bullish on the long-term prospects for China’s economy and its capital market,” she said.

“Over the next three to five years, the Chinese stock market will demonstrate unprecedented potential and present a major opportunity that no domestic or global investors can afford to ignore.”