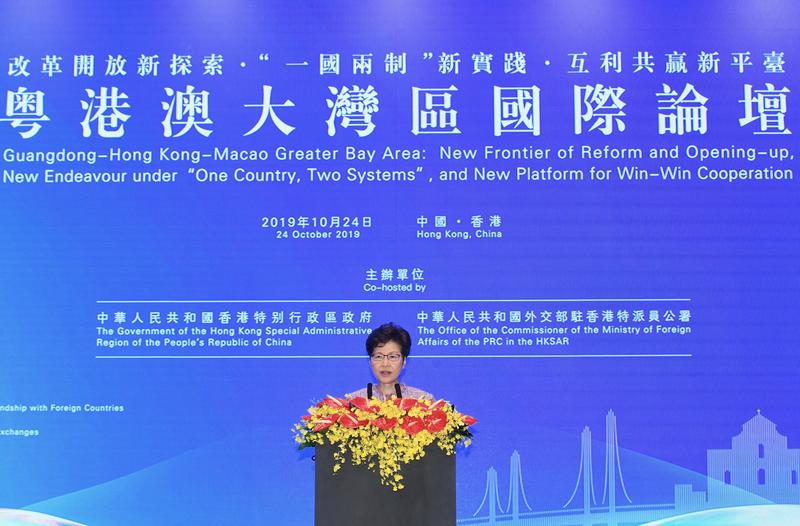 HONG KONG - Hong Kong will widen the scale and scope of cross-boundary use of renminbi and enhance financial market connectivity in the Greater Bay Area (GBA), Chief Executive Carrie Lam Cheng Yuet-ngor said at the International Forum on the Guangdong-Hong Kong-Macao Greater Bay Area in Hong Kong on Thursday.

Sharing how steady progress had been made in terms of policy implementation since the GBA Outline Development Plan was unveiled in February, Lam said the Guangdong provincial government and the Hong Kong and Macao Special Administrative Region (SAR) governments were working closely to further enhance the flow of people, goods and information within the GBA.

In her speech, Lam stressed the strengths of Hong Kong as a global financial center, noting how in the GBA outline, "a perfect niche for Hong Kong has been scoped"

"To name a few, these policies include providing tax relief by Guangdong municipal governments for non-mainland, including Hong Kong, high-end talents and talents in short supply who work in the Greater Bay Area, encouraging innovation and entrepreneurship amongst the youth of Hong Kong and Macao in the nine mainland cities of the Greater Bay Area, facilitating vehicles from Hong Kong and Macao entering and exiting mainland ports, and expanding the implementation scope of the connection with the Speedy Customs Clearance between Customs administrations," Lam said.

In her speech, Lam stressed the strengths of Hong Kong as a global financial centre, noting how in the GBA outline, "a perfect niche for Hong Kong has been scoped".

ALSO READ: HK can take a lead in GBA

Other than strengthening HK's role as the world's premier off-shore renminbi and wealth management center, the Hong Kong government also aims to position the city as a green finance center in the Bay Area.

Lam said that in order to boost the city's professional service sectors, her government planned to consult the public soon on a mechanism with the Chinese mainland for mutual recognition of and assistance in corporate insolvency matters. This will not only offer better legal protection to stakeholders in Hong Kong and on the mainland but further optimise the business and investment environments of both places, she said.

On the innovation and technology front, Lam said her government planned to establish two key research clusters at the Hong Kong Science and Technology Park. Health@InnoHK, would focus on health care technologies while AIR@InnoHK would specialize in artificial intelligence and robotics technologies. The presence of such platforms, Lam was confident, would encourage "top-tier technology enterprises and R&D institutions from around the world to set up their units in Hong Kong..."

In order to ensure that young people do not miss out on the opportunities generated by GBA's development, Lam said an Alliance of Hong Kong Youth Innovative and Entrepreneurial Bases in the Greater Bay Area would be established soon. "Organizations from Guangdong and Hong Kong with strength and proven track records, such as innovative and entrepreneurial bases, universities, NGOs, scientific research institutes, professional bodies and venture funds, will be invited to join the Alliance and jointly set up a one-stop information, publicity and exchange platform," she said.

She iterated that GBA development plans as outlined by the central government could only be realized by upholding the premise of "one country, two systems" and said Hong Kong drew strength from the same principle in its resolve to ride out the unprecedented political storm that had engulfed the city.