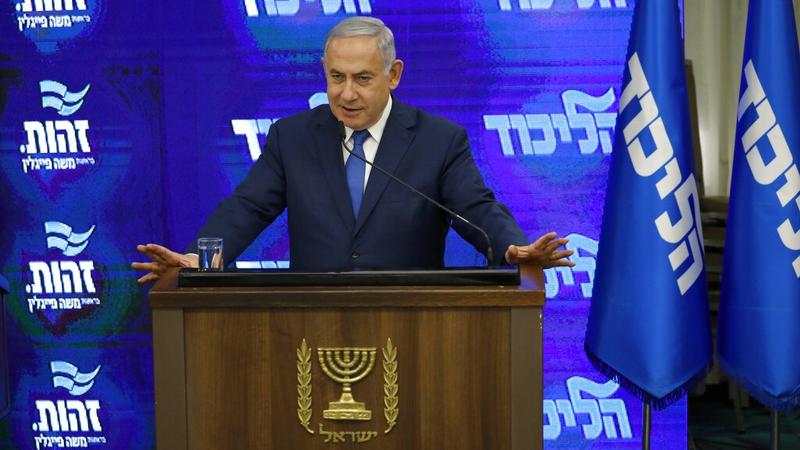 Israeli Prime Minister Benjamin Netanyahu, gives a joint press conference with Zehut leader Moshe Feiglin, in Tel Aviv, Israel, Aug 29, 2019. Netanyahu on Aug 29, 2019 accused Iran and its Lebanese proxy Hezbollah of racing to build a missile-production program in Lebanon, vowing to destroy the ambitious project and issuing a stern warning to his enemies to "be careful." (ARIEL SCHALIT / AP)

JERUSALEM — Israel's prime minister on Thursday accused Iran and its Lebanese proxy Hezbollah of racing to build a missile-production program in Lebanon, vowing to destroy the ambitious project and issuing a stern warning to his enemies to "be careful." The threats ratcheted up an already tense standoff that has pushed the bitter adversaries closer toward open, armed conflict in recent weeks.

"Today we uncovered part of Iran and Hezbollah's precision missile project. We know a few other things," Prime Minister Benjamin Netanyahu said at a news conference.

"We are determined to eliminate this dangerous project. The aim of the publication today is to convey a message that we will not sit by and allow our enemies to arm themselves with deadly weapons directed at us," he said.

"Today I say to them: 'Dir Balak," he added, using a popular Arabic phrase that means "be careful" and is often used as a warning or threat in Hebrew slang.

Hezbollah denies harboring missile factories. While the group's leader boasts about having highly accurate missiles, he denies that the group produces them.

Israel considers Iran to be its greatest enemy and has identified Hezbollah as the most potent military threat on its borders. The military estimates that Hezbollah, which battled Israel to a stalemate in a monthlong war in 2006, now has a vast arsenal of some 130,000 rockets and missiles.

But Israel believes that most of these weapons are relatively primitive unguided rockets and considers the acquisition of precision guided missiles by Hezbollah to be a major game changer. Israeli media have reported that early this week, Israeli drones targeted a Beirut facility housing a "planetary mixer," a large industrial machine that is critical to making missiles.

ALSO READ: Netanyahu threatens to use 'lethal force' against Hezbollah

Lt. Col. Jonathan Conricus, a military spokesman, said in the years after the outbreak of the Syrian civil war in 2011, the army was successful in thwarting attempts by Iran to smuggle guided missiles to Hezbollah through Syria, and a later effort to convert existing Hezbollah rockets into guided missiles. More recently, he said Israel has identified efforts by Iran and Hezbollah to establish a missile-production industry inside Lebanon.

He said Iran "has not only relinquished" its efforts. "They have intensified them," he said. He described "more efforts, more money, more operatives and more pressure from Iran."The army identified three Iranian commanders and a top Hezbollah operative as the masterminds of the program.

It said the overall commander was Muhammad Hussein-Zada Hejazi, a brigadier general who reports directly to Qassem Soleimani, the head of the Iranian Revolutionary Guards' elite Quds force, while the Hezbollah official was identified as Fuad Shukr, described as a top commander who is wanted by the US on terrorism charges.

Israel has acknowledged carrying out scores of airstrikes in Syria in recent years aimed primarily at preventing the transfers of sophisticated weapons, including guided missiles, to Hezbollah. This quiet war has expanded in recent weeks, raising the risk of a larger conflict that all sides say they want to avoid. Some critics have suggested that Netanyahu, who is fighting for his political survival in Sept. 17 elections, is motivated by domestic politics.

Last weekend, an Israeli airstrike thwarted what Israel said was a plot by Iran to launch a series of explosives-laden attack drones meant to crash into targets in Israel. Iran denied the claims. U.S. officials have also said that Israel last month struck an Iranian target in Iraq, the first Israeli strike in that country since 1981. Then on Sunday came the alleged drone strike in a Hezbollah stronghold in southern Beirut.

Israel has gone increasingly public with its efforts in an attempt to press Lebanon, and the international community, into action against Iran.

"Iran is endangering Lebanon," Conricus said. He accused Iran of using Lebanese civilians as "human shields."Under the UN resolution that ended the 2006 war, Hezbollah is blocked from operating or possessing arms in southern Lebanon near the Israeli border. But the group, the most powerful actor in Lebanon's fragmented political system, is widely believed to have violated the resolution.

While Israel considers Hezbollah its strategic enemy, Conricus accused Lebanon of being "complicit" by failing to stop the group's armament efforts.

The UN Security Council unanimously voted Thursday to extend the peacekeeping force in southern Lebanon, known as UNIFIL, by an additional year. But Israel's Foreign Ministry said in a statement that Hezbollah and Lebanon "continue to significantly hinder the full and effective implementation" of the force's mandate, which includes enforcing disarmament of southern Lebanon.

"Should these restrictions remain, UNIFIL's relevance is questioned," the ministry said.

Netanyahu first accused Hezbollah of setting up secret rocket factories last year, claiming in a speech before the UN General Assembly that the group had them near Beirut airport, hiding them among civilians.

The Lebanese government denounced his statements at the time and the Lebanese foreign minister took dozens of ambassadors and diplomats on a tour of locations near the airport to dispel the allegations.