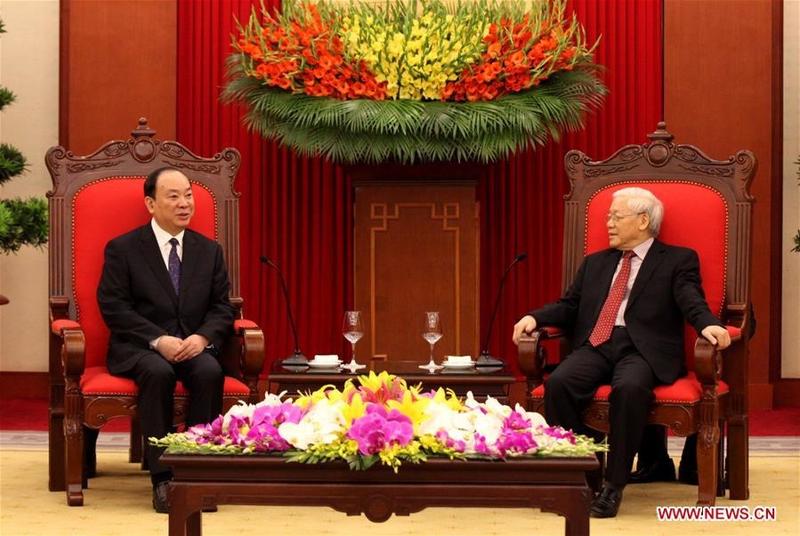 HANOI – China and Vietnam have promised to further promote their bilateral relationship and cooperation in various fields.

Huang, who is on a visit to Vietnam, said China-Vietnam relations have enjoyed sound momentum of development in recent years with positive outcomes achieved in exchanges and cooperation across the board.

Under the new circumstances, China is willing to work with the Vietnamese side to implement the consensus reached by the leaders of the two countries and carry forward the traditional China-Vietnam friendship, he said.

Huang called for the two sides to enhance exchanges of governance experiences and expand cooperation in such fields as culture, media and tourism so as to consolidate the foundation of the China-Vietnam friendship.

For his part, Trong spoke highly of the great achievements China has made since the 18th CPC National Congress.

He said Vietnam is willing to share experiences with China for the promotion of party building and cause of socialism.

The Vietnamese side attached utmost importance to the traditional Vietnam-China friendship, hoping that under the key guidance of the ties between CPV and CPC, their comprehensive strategic partnership of cooperation will be further developed in a healthy and stable way, Trong said.

During his stay in Vietnam, Huang also held talks with Vo Van Thuong, head of the CPV Central Committee's Communication and Education Commission and delivered a keynote speech at the 14th theory seminar between the two parties.