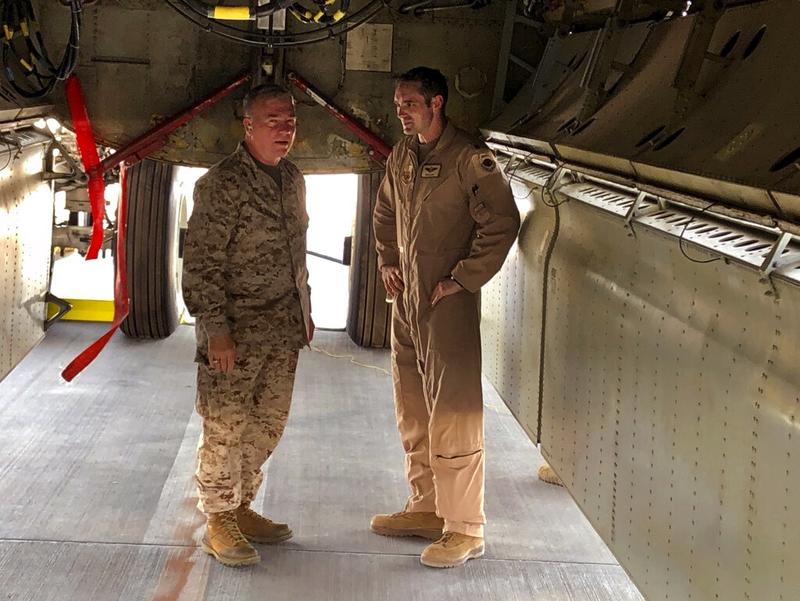 Marine Gen Frank McKenzie, head of US Central Command, confers with an Air Force officer below the bomb bay of a B-52 bomber on June 7, 2019 at al-Udeid air base in Qatar. (ROBERT BURNS / AP)

ABOARD THE USS ABRAHAM LINCOLN — Under a starry sky, US Navy fighter jets catapulted off the aircraft carrier's deck and flew north over the darkened waters of the northern Arabian Sea, a unmistaken signal to Iran that the foremost symbol of the American military's global reach is back in its neighborhood, perhaps to stay.

The USS Abraham Lincoln, with its contingent of Navy destroyers and cruisers and a fighting force of about 70 aircraft, is the centerpiece of the Pentagon's response to what it calls Iranian threats to attack US forces or commercial shipping in the Persian Gulf region. In recent years, there has been no regular US aircraft carrier presence in the Middle East.

US officials have said that signs of heightened Iranian preparations to strike US and other targets in the waters off Iran as well as in Iraq and Yemen in late April emerged shortly after the Trump administration announced it was clamping down further on Iran's economy by ending waivers to sanctions on buyers of Iranian crude oil.

The administration went a step beyond that on Friday, announcing penalties that target Iran's largest petrochemical company.

On Saturday the Lincoln was steaming in international waters east of Oman and about 200 miles from Iran's southern coastline. One month after its arrival in the region, the Lincoln has not entered the Persian Gulf, and it's not apparent that it will. The USS Gonzalez, a destroyer that is part of the Lincoln strike group, is operating in the Gulf.

"Since we've been operating in the region, we've had several interactions with Iranians," he said. "To this point all have been safe and professional — meaning, the Iranians have done nothing to impede our maneuverability or acted in a way which required us to take defensive measures."

The Lincoln's contingent of 44 Navy F-18 Super Hornets are flying a carefully calibrated set of missions off the carrier night and day, mainly to establish a visible US "presence" that Marine Gen Frank McKenzie, the head of Central Command, said Saturday seems to have caused Iran to "tinker with" its preparation for potential attacks.

He said on Friday that he thinks Iran had been planning some sort of attack on shipping or US forces in Iraq. Two other officials, speaking on condition of anonymity to discuss sensitive details, said Iran was at a high state of readiness in early May with its ships, submarines, surface-to-air missiles and drone aircraft.

"It is my assessment that if we had not reinforced, it is entirely likely that an attack would have taken place by now," McKenzie said.

In an interview on the bridge, or command station, of the Lincoln with reporters who are traveling with him throughout the Gulf region, McKenzie said the carrier has made an important difference.

"We believe they are recalculating. They have to take this into account as they think about various actions that they might take. So we think this is having a very god stabilizing effect," he said. 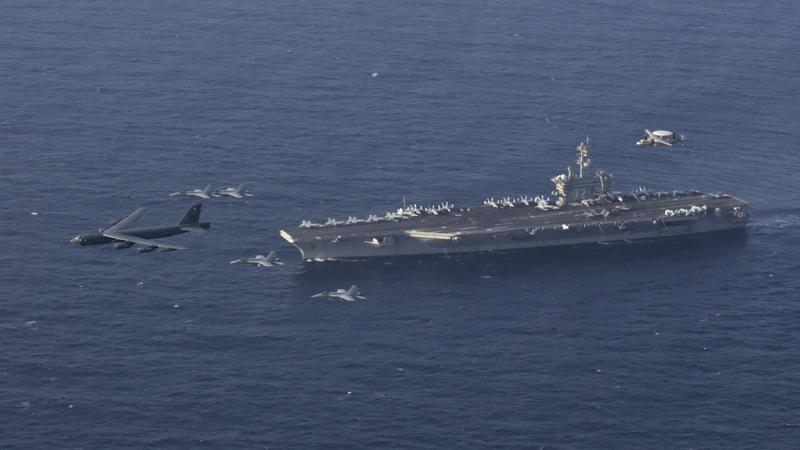 He said earlier in the week that he had not ruled out requesting additional defensive forces to bolster the deterrence of Iran, whose economy is being squeezed hard by US sanctions after President Donald Trump pulled the US last year from the 2015 nuclear deal between Tehran and world powers. The US already has announced plans to send 900 additional troops to the Mideast and extend the stay of 600 more as tens of thousands of others also are on the ground across the region.

Iran's influential Revolutionary Guard has said it doesn't fear a possible war with the US and asserted that America's military might has not grown in power in recent years. "The enemy is not more powerful than before," the Guard spokesman, Gen. Ramazan Sharif, said in late May.

The US has accused Iran of being behind a string of recent incidents, including what officials allege was sabotage of oil tankers off the coast of the United Arab Emirates.

McKenzie spent two days aboard the Lincoln to confer with naval commanders, observe both daytime and nighttime flight operations, and to thank crew members. Their deployment plans were disrupted when the White House approved McKenzie's request in early May that the Lincoln cut short its time in the Mediterranean Sea and sail swiftly to the Arabian Sea.

"I am the reason you are here," the general said in an all-hands announcement to the nearly 6,000 personnel on the Lincoln Friday night shortly after he flew aboard by Navy helicopter from Oman.

"I requested this ship because of ongoing tensions with Iran," he said. "And nothing says you're interested in somebody like 90,000 tons of aircraft carrier and everything that comes with it. Our intent by bringing you here was to stabilize the situation and let Iran know that now is not the time to do something goofy."

McKenzie also requested, and received, four Air Force long-range B-52 bombers. They were in the region 51 hours after being summoned and were flying missions three days later. They are now operating from al-Udeid air base in Qatar. There had been no US bomber presence in the Gulf region since late February.

In an interview Friday after speaking with B-52 pilots at al-Udeid, McKenzie said it's hard to know whether that gap in a bomber presence had emboldened the Iranians.