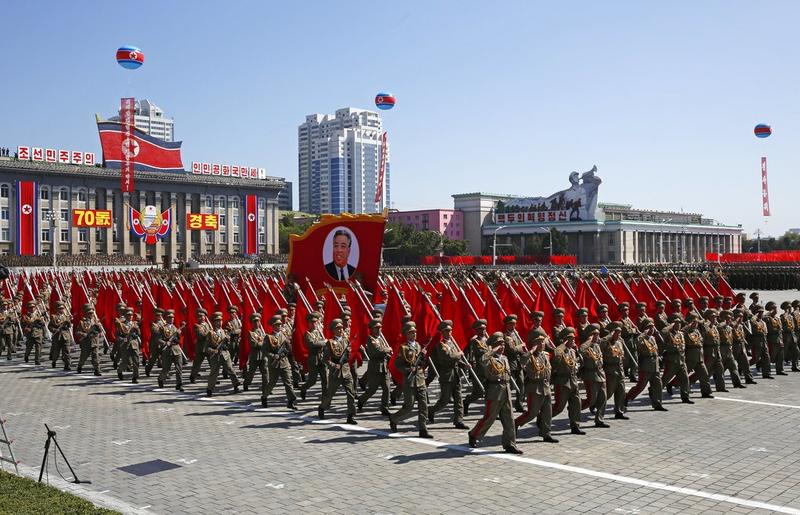 DPRK soldiers march with a float showing late DPRK leader Kim Il-sung during a parade for the 70th anniversary of the DPRK’s founding day in Pyongyang, Sept 9, 2018. (KIN CHEUNG / AP)

PYONGYANG — The Democratic People’s Republic of Korea (DPRK) rolled out some of its latest tanks and marched its best-trained goose-stepping units through Kim Il-sung Square in a major military parade on Sunday to mark its 70th anniversary.

Tens of thousands of DPRK people waving brightly colored plastic bouquets filled Pyongyang's Kim Il-sung Square as the parade began. Pyongyang residents have been training for months for the anniversary and held up the bouquets to spell out words and slogans that can be seen from the VIP viewing area.

After a parade featuring tanks and some of its biggest artillery, missiles and lots of goose-stepping units from all branches of the military, the focus switched to civilian groups ranging from nurses to students to construction workers, many with colorful floats beside them.

Kim attended the morning parade but did not address the assembled crowd, which included China's top legislator, Li Zhanshu, and high-level delegations from countries that have friendly ties with the North.

Senior statesman Kim Yong-nam set the relatively softer tone for the event with an opening speech that emphasized the economic goals of the country.

He called on the military to be ready to work to help build the economy.

Capital residents unable to attend at the square lined the streets around town to cheer and applaud convoys carrying the troops after they complete the parade duties. 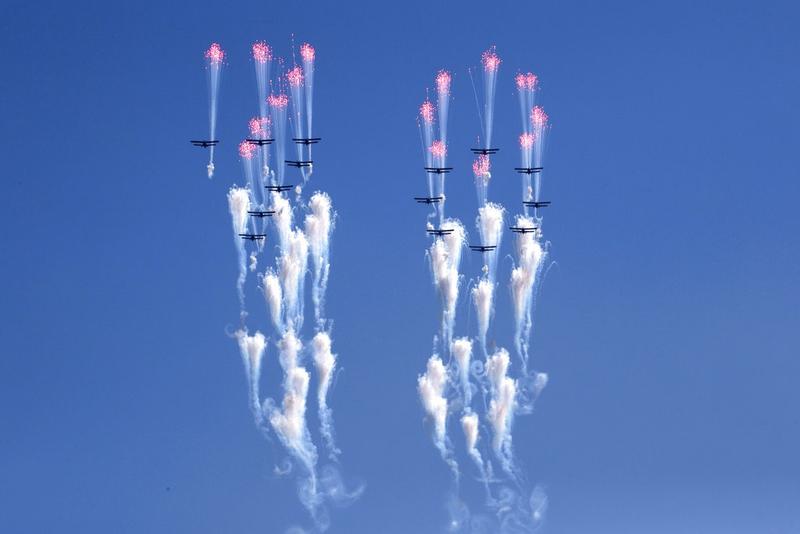 Airplanes forming the number 70 fly in formation and fire flares during a parade for the 70th anniversary of the Democratic People’s Republic of Korea’s founding day in Pyongyang, Sept 9, 2018. (NG HAN GUAN / AP)

Soon after the Sunday celebrations end, Kim will once again meet in Pyongyang with President of the Republic of Korea (ROK) Moon Jae-in in their third summit since April.

The "new line" of putting economic development first has been Kim's top priority this year.

In this Sept 9, 2018 photo provided by the government of the Democratic People’s Republic of Korea (DPRK), DPRK leader Kim Jong-un, center, visits the Kumsusan Palace of the Sun, ahead of the country's military parade to mark its 70th anniversary as a nation, in Pyongyang. (KOREAN CENTRAL NEWS AGENCY/KOREA NEWS SERVICE VIA AP)

This year's celebrations also mark the revival of the DPRK’s iconic mass games after a five-year hiatus.

The mass games involve tens of thousands of people holding up placards or dancing in precise unison and are intended to be a display of national unity. This year's spectacle — tickets start at just over US$100 and go up to more than US$800 per seat — also has a strong economic theme.