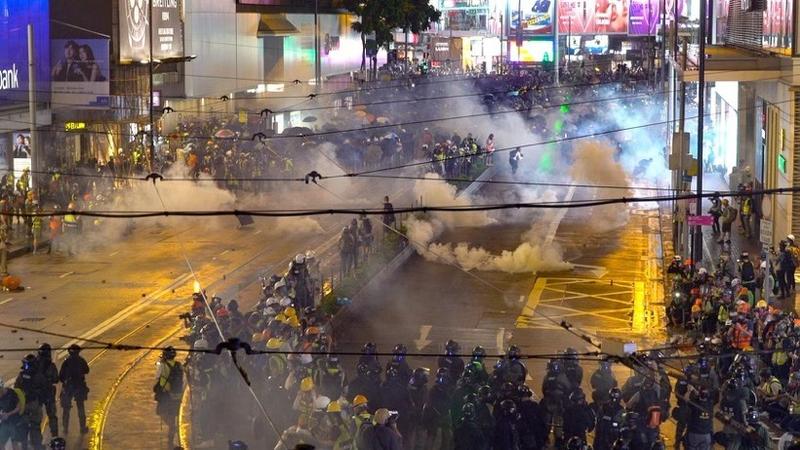 Rioters hurl petrol bombs at police during the Aug 31, 2019 illegal protest in Hong Kong, prompting the latter to use teargas. (PHOTO / CHINA DAILY)

The Hong Kong Special Administrative Region government denounced the United States Congress’ reintroduction of the Hong Kong Human Rights and Democracy Act and reiterated that foreign legislatures should not interfere in any way in the internal affairs of Hong Kong.

It also condemned the illegal behavior of radical protesters over the weekend in a release, saying their acts of vandalism must stop immediately.

Since the return to the motherland, the Hong Kong SAR has been exercising ‘Hong Kong people administering Hong Kong’ and a high degree of autonomy in strict accordance with the Basic Law

“Since the return to the motherland, the Hong Kong SAR has been exercising ‘Hong Kong people administering Hong Kong’ and a high degree of autonomy in strict accordance with the Basic Law,” the statement said.

The “one country, two systems” principle has been fully and successfully implemented.

ALSO READ: Police: keep a 'safe distance' away during protests

Human rights and freedom in Hong Kong are fully protected by the Basic Law, the Hong Kong Bill of Rights Ordinance and other legislation, the statement said. “The HKSAR government attaches great importance to them and is determined to safeguard them.”

Police said it arrested 157 people over the weekend.

Chief Executive Carrie Lam Cheng Yuet-ngor and the management of subway operator MTR Corp said such vandalism is intolerable. Such acts have seriously affected the lives of local residents and tourists and have severely tarnished Hong Kong’s image, they agreed.

Lam spoke in a meeting after visiting the area around Central Station. She and the MTR managers vowed to maintain their resolve against such violence and will work together to minimize its negative impact.

The SAR Secretary for Transport and Housing Frank Chan Fan also appealed to the public to respect the responsibilities of MTR’s staff as well as the public’s right to travel.

The MTR is the most important part of Hong Kong’s transportation system, handling an average of 5 million passenger trips a day.

All exits of Central Station were open on Monday, thanks to overnight repairs by MTR staff and a cleaning crew that started work early in morning.

A cleaner who wanted to remain anonymous said she arrived at 7 am to erase the graffiti sprayed on outer walls of subway stations, phone booths and advertising boards.

She said the facilities “have nothing to do with the protests and should not be damaged”.

On Sunday, most shops and restaurants in the area closed right after Central Station announced suspension of services at 4 pm.

Nass, 28, a shop manager in Central, said Sunday was the first time his establishment had closed earlier than usual in recent months. “But if it (the violence and vandalism) continues, or occurs even once a month, our company may have to lay off some staff,” said Nass, adding that the retail heartland of Hong Kong continued to see fewer visitors since the protests began three months ago.

A 76-year-old resident who gave his name as Yadav said he had to walk to work at 8:30 pm on Sunday because buses and the subway were out of service.

“I don’t know when this will stop. But what protesters did was very bad. People living here are having a very difficult time,” Yadav said.