Moon says to have frank talks with Kim to build trust

This handout from the Blue House taken and released on May 26, 2018 shows President of the Republic of Korea (ROK) Moon Jae-in, second left, and top leader of the Democratic People's Republic of Korea (DPRK) Kim Jong-un, right, during their second summit at the north side of the truce village of Panmunjom in the Demilitarized Zone (DMZ). (HANDOUT / THE BLUE HOUSE / AFP)

SEOUL – President of the leaders of the Republic of Korea (ROK) Moon Jae-in said on Monday that he will have frank talks with top leader of the Democratic People's Republic of Korea (DPRK) Kim Jong-un during the upcoming inter-Korean summit.

The two leaders are set to meet in Pyongyang in their third summit, which is scheduled to last for three days from Tuesday.

I aim to frankly have many talks with Chairman Kim Jong-un during the upcoming summit.

Moon was expected to arrive at the Pyongyang International Airport at about 10 am local time (0100 GMT) Tuesday and be greeted by a welcoming ceremony at the airport.

In a meeting with his senior aides on Monday, Moon said it would be significant to make a fruitful development in inter-Korean relations by implementing the past agreements rather than reaching additional ones.

For the implementation, building trust between the two Koreas would be the must do, Moon noted.

"I aim to frankly have many talks with Chairman Kim Jong-un during the upcoming summit," Moon said ahead of his first visit to the DPRK's capital city since he took office in May last year.

Moon said what he wants is an irreversible, lasting peace on the Korean Peninsula, a means of economic co-prosperity and reunification regardless of international security situations.

Denuclearization of the Korean Peninsula and defusing military tension between the two Koreas will be on the main dialogue agenda of the summit.

Moon will make efforts to encourage the DPRK and the United States to rapidly resume sincere talks in a bid to let the DPRK advance the denuclearization and the US take corresponding measures, Im Jong-seok, Moon's chief of staff, said at a press briefing in Seoul Monday. 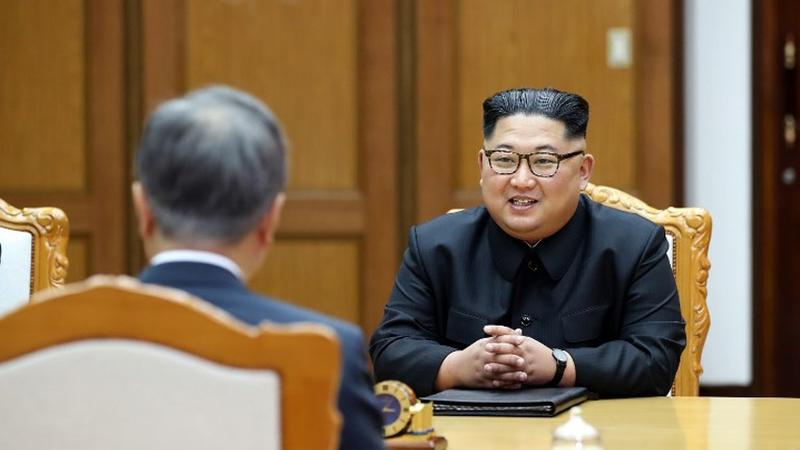 This handout photograph taken on May 26, 2018 and released by South Korea's presidential Blue House on May 27, 2018 shows President of the Republic of Korea (ROK) Moon Jae-in, left, and top leader of the Democratic People's Republic of Korea (DPRK) Kim Jong-un during the summit at the north side of the truce village of Panmunjom in the Demilitarized Zone (DMZ) dividing the two Koreas. (HANDOUT / AFP / THE BLUE HOUSE)

Moon will play a role in arbitrating and facilitating dialogues between Pyongyang and Washington for the denuclearization as President Donald Trump urged him to play the role of a chief negotiator, while the DPRK leader also has an anticipation for Moon's role, said Im.

Moon and Trump are expected to hold a separate summit meeting on the sidelines of the UN General Assembly.

Im declined to detail on what denuclearization steps Moon and Kim might discuss and even whether their discussion could be made known to the international community, but said it would be the first time the denuclearization will be on the key agenda in an inter-Korean summit.

During their first summit on April 27, Moon and Kim agreed to completely denuclearize the Korean Peninsula.

The two leaders will discuss ways and are expected to reach a meaningful agreement to end the military tension between the two countries and the threat of war on the peninsula, said the presidential chief of staff.

The Korean Peninsula remains in a technical state of war as the 1950-53 Korean War ended with armistice. Following the first summit, Moon and Kim agreed to declare the end to the Korean War by the end of this year.

Moon and Kim will also discuss ways to improve inter-Korean relations, especially making in-depth discussions on how to fundamentally eliminate the pain of Korean families who have been separated since the end of the Korean War, said Im.

During the upcoming summit, Moon and Kim would sit face to face at least twice.

The two foreign ministers exchanged opinions about the recent improvement in inter-Korean relations and the preparations for the third Moon-Kim summi.

Kang would be the country's first foreign minister to accompany a head of state to Pyongyang for the inter-Korean summit.

During the phone call, Pompeo urged Kang to continue close communications and make continued efforts for denuclearization of the peninsula and the peace regime settlement.