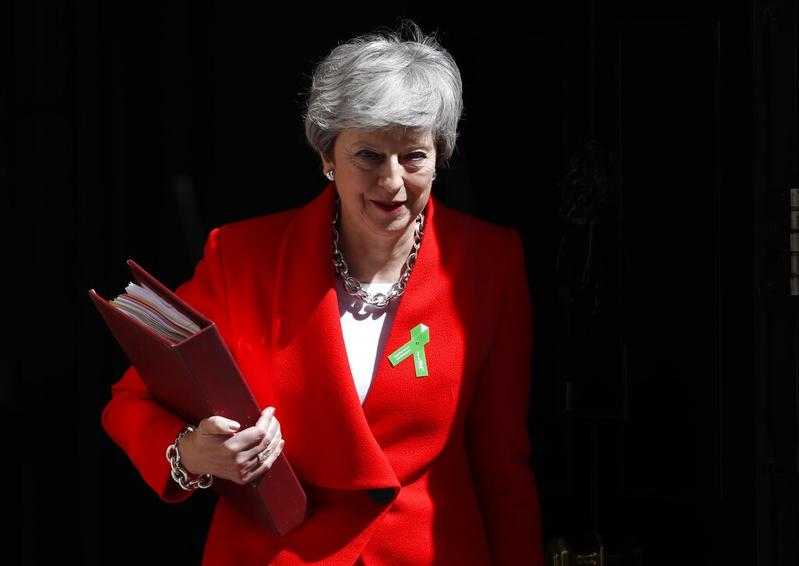 Britain's Prime Minister Theresa May leaves 10 Downing Street for her weekly Prime Minister's Questions in the House of Commons in London, May 15, 2019. (ALASTAIR GRANT / AP)

Theresa May flies back to London on Thursday morning to once again face colleagues seeking to oust her, as she struggles to find a way to pass her Brexit deal.

Returning from Paris where she joined world leaders pledging to boost internet safety Wednesday, the UK prime minister will meet with rank-and-file Conservative Party members who want her to set a roadmap for quitting.

On Tuesday, May tried to buy herself more time by promising to bring her Brexit deal back to Parliament at the start of June, in the same week that she’s due to host President Donald Trump for his state visit and celebrate the 75th anniversary of the D-Day landings.

The executive of the 1922 Committee, representing Tory members of Parliament, will use a meeting at the premier’s office at 11:30 am Thursday to urge her to quit as soon as possible, according to two of its members, speaking on condition of anonymity.

The group will ask May to step down before June 15, and if she refuses to accept their proposed timetable, they could change the rules to allow for another no-confidence vote, Conservative MP and Brexit campaigner Andrew Bridgen said in an interview on ITV’s Peston show. 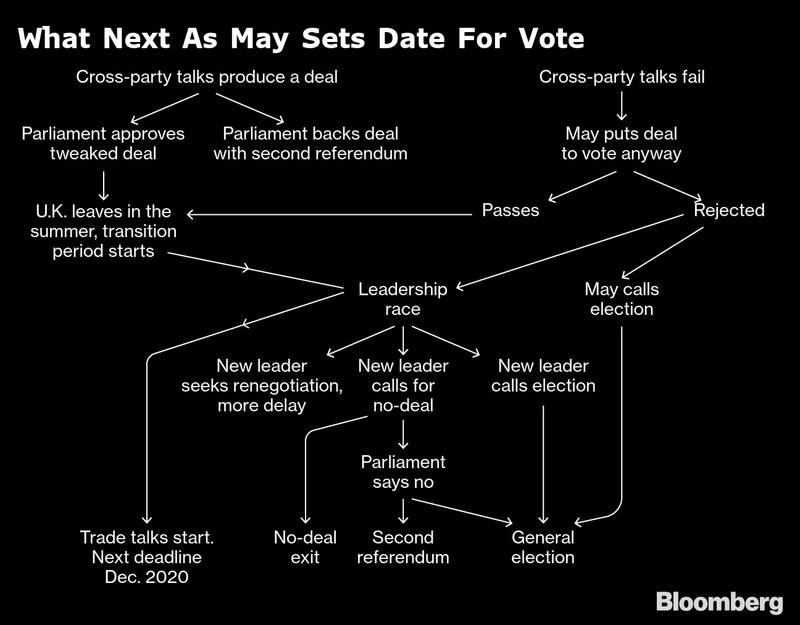 ‘Against a brick wall’

Ed Vaizey, a Pro-remain Tory MP, agreed that May should “probably step down” after the European elections. “She can’t keep banging her head against a brick wall,” he told host Robert Peston.

May has promised she’ll step down once Parliament passes her Brexit deal, even though politicians rejected it three separate occasions, while six weeks of talks with the opposition Labour Party failed to yield an agreement. The result of her failure to get an agreement is expected to be reflected in next week’s European Parliament elections, with the Tories polling at just 12%, according to Survation.

One option would be for the committee executive to change rules governing how the Tory party can dispose of their leaders, the person said. May survived a vote of confidence in her leadership exactly six months ago, and under current rules, she cannot be challenged by her party for another six months.

Brexit Secretary Steve Barclay on Wednesday warned MPs they would have to choose between no Brexit or a no-deal Brexit if they don’t pass the Withdrawal Agreement Bill. Though unusually, he referred to May’s Brexit deal as “the Barnier deal,” linking it to Michel Barnier, the EU’s chief negotiator, in what seemed like an attempt to distance himself from it.

On Wednesday, Labour leader Jeremy Corbyn’s spokesman said the party wouldn’t be able to support her bill, but refused to say whether it would abstain. That might be a signal that the party will let it go through, or it might just be that the decision hasn’t been made yet.

May attempted to fight back against Nigel Farage’s new Brexit party, which surged to a six-point lead on 30% in the Survation poll. She hopes MPs, stung by local election results earlier this month and next week’s election, will back her deal in a bid to unite their party.

"If people want to vote for a party that is not only a Brexit party but a party that can deliver Brexit, they should vote Conservative,’’ May told lawmakers in her weekly Question session in the House of Commons.