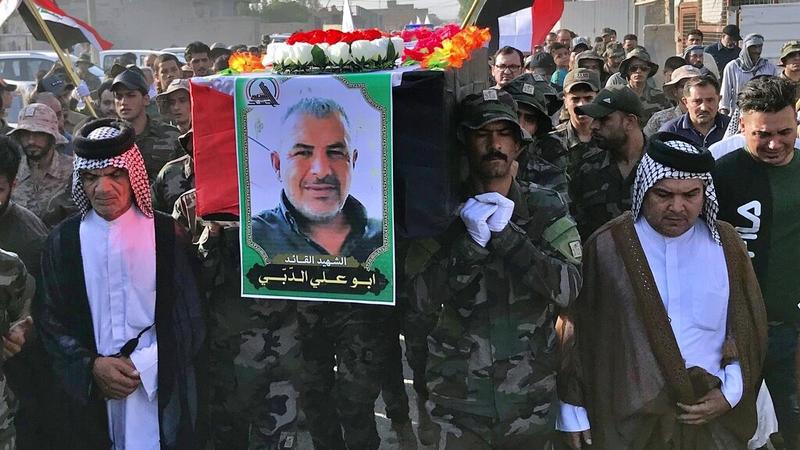 Mourners carry the coffin with a poster of Abu Ali al-Dabi, a fighter of the Popular Mobilization Forces, who was killed on Aug 25, 2019 in a drone attack, during his funeral procession in Baghdad, Iraq, Aug 26, 2019. Two unidentified drones killed two Iraqi members of an Iran-backed paramilitary force on Aug 25, the group said in a statement, saying the attack took place in Iraq near the border with Syria. (ALI ABDUL HASSAN / AP)

BAGHDAD — A powerful bloc in Iraq's parliament called on Monday for the withdrawal of US troops from Iraq, following a series of airstrikes targeting Iran-backed Shi'ite militias in the country that have been blamed on Israel.

The Fatah Coalition said it holds the United States fully responsible for the alleged Israeli aggression, "which we consider to be a declaration of war on Iraq and its people."

The Fatah Coalition said it holds the United States fully responsible for the alleged Israeli aggression, "which we consider to be a declaration of war on Iraq and its people." The coalition is a parliament bloc representing Iran-backed paramilitary militias known as the Popular Mobilization Forces.

The coalition's statement came a day after a drone strike in the western Iraqi town of Qaim killed a commander with the forces — the latest in strikes apparently conducted by Israel against the Iranian-backed militias in Iraq. It added that US troops are no longer needed in Iraq.

The Shi'ite militiamen, meanwhile, held a funeral procession in Baghdad for the commander killed Sunday.

"There is no greater God but God!" the mourners shouted as they marched behind a banner with the words "Death to America" and "Death to Israel." Some trampled on an American flag as they marched.

The US Defense Department issued a statement Monday denying responsibility for the recent attacks and promising to cooperate with Iraqi investigations.

"We support Iraqi sovereignty and have repeatedly spoken out against any potential actions by external actors inciting violence in Iraq, " Pentagon spokesman Jonathan R. Hoffman said. "The government of Iraq has the right to control their own internal security and protect their democracy."

Anger is mounting in Iraq following a spate of mysterious airstrikes that have targeted military bases and a weapons depot belonging to Iran-backed militias. The drone attacks have not been claimed by any side but US officials have said Israel was behind at least one of the attacks.

The Shi'ite militias have blamed the attacks on Israel but hold its ally the US ultimately responsible. The attacks are threatening to destabilize security in Iraq, which has struggled to remain neutral in the conflict between Washington and Tehran.

"These strikes won't break us, they'll make us stronger," the militias' Lt. Gen. Hussein Abed Muttar told The Associated Press at the funeral.

Along with the commander, another member of the Shi'ite militia was also killed in the drone attack on Sunday evening near the Qaim border crossing with Syria. The attack targeted vehicles belonging to the Hezbollah Brigades faction, also known as Brigade 45, which operate under the umbrella of the state-sanctioned Shiite militias. 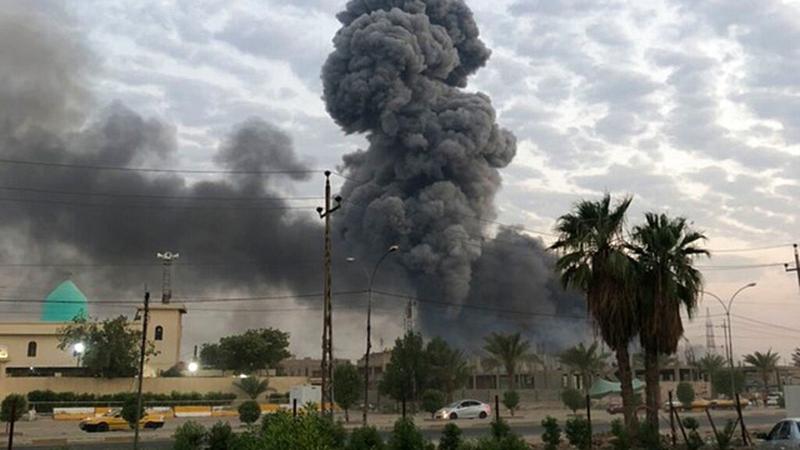 In this Aug 12, 2019, file photo, plumes of smoke rise after an explosion at a military base southwest of Baghdad, Iraq. (LOAY HAMEED / AP)

US forces withdrew from Iraq in 2011, but returned in 2014 at the invitation of the government to help battle the Islamic State group after it seized vast areas in the north and west of the country, including Iraq's second-largest city, Mosul. A US-led coalition provided crucial air support as Iraqi forces regrouped and, together with the PMF, drove IS out in a costly three-year campaign.

The US maintains about 5,000 troops in Iraq, and some groups say there's no longer a justification for them to be there now that IS has been defeated.

"While we reserve the right to respond to these Zionist attacks, we hold the international coalition, particularly the United States, fully responsible for this aggression which we consider a declaration of war on Iraq and its people," the statement by the Fatah Coalition said.

A statement issued after the meeting avoided blaming the drone attacks on any specific country, but described it as a "blatant act of aggression" aimed at dragging the PMF away from its ongoing role of eradicating remnants of the Islamic State group.

Absent from the meeting were the leaders of two of the most powerful factions strongly allied to Iran, Abu Mahdi al-Muhandis and Qais al-Khazali. An official who attended the meeting said they were in Iran.