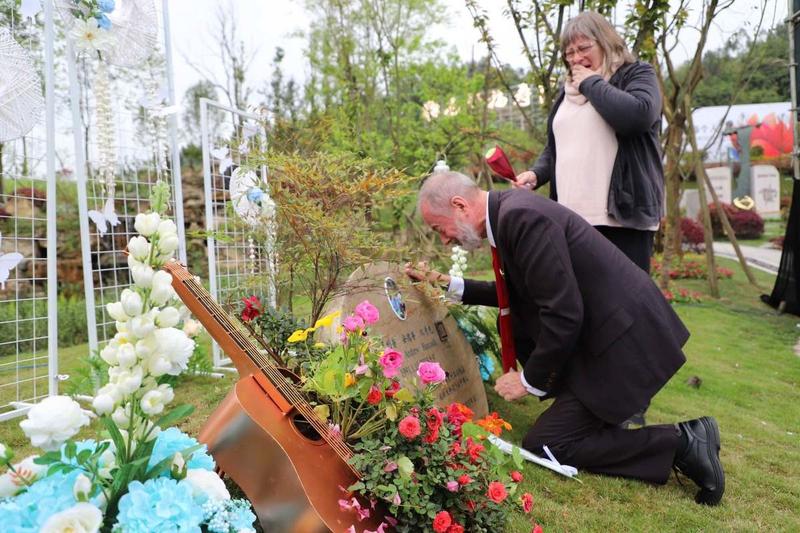 Peter and Penelope Hancock from Australia mourn their son Phillip in front of his monument at the Chongqing Organ Donation Memorial Park on Sunday. (BAI JIE / CHINA DAILY)

A monument to Phillip Hancock, an Australian man whose liver, kidneys and corneas were transplanted to help five Chinese patients, was unveiled amid tears of love and gratitude on Sunday at the Chongqing Organ Donation Memorial Park.

On May 9 last year, Hancock, 26, died of complications from diabetes in a hospital in Chongqing. It was his wish to donate his organs

On May 9 last year, Hancock, 26, died of complications from diabetes in a hospital in Chongqing. It was his wish to donate his organs.

"I am very proud of him," his father, Peter Hancock, said through tears after he unveiled the monument to his son. "He is a hero to me."

It was the first monument in China to commemorate a foreign organ donor. Phillip Hancock had taught at Chongqing's Southwest University.

"Organ donation should be encouraged and it should start with the education of young people," the father said.

According to the Chongqing Red Cross, Phillip's case was the seventh successful organ transplant from a foreign donor in China. His parents suggested placing a guitar at the monument to mark his love of playing the instrument since he was a child.

ALSO READ: Rules to be revised on organ donations

"I always remember him playing the guitar in his room, which was next to mine, when he was little," his mother, Penelope Hancock, said.

China made voluntary donations the only legitimate source of organ donations after it banned the use of organs from executed prisoners in January 2015.

To date, China has more than 1.1 million registered organ donors. More than 22,000 people have donated their organs after death in the country. More than 65,000 individual organs have been donated, according to the National Health Commission.

The number of organ transplant surgeries performed annually in China is the second-highest in the world, after the United States.

Like many other countries, China faces a shortage of donated organs. Every year, about 300,000 patients with terminal illnesses need transplants, but only about 20,000 surgeries are performed.