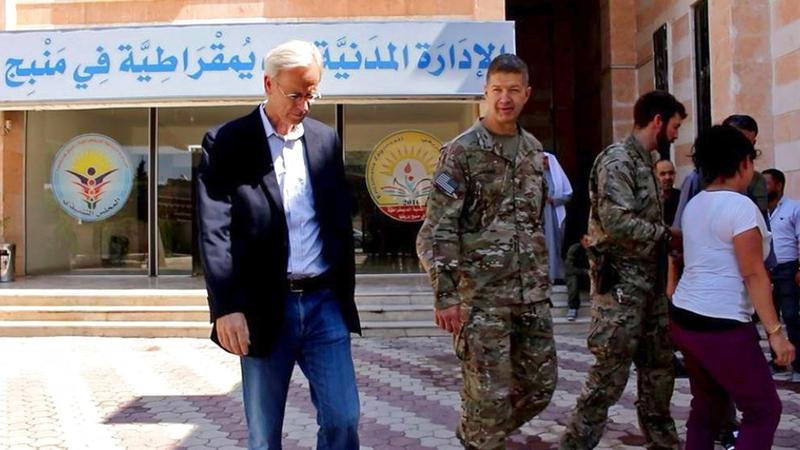 BEIRUT — No Turkish troops or allied Syrian fighters will deploy inside the strategic Syrian town of Manbij following a Turkish-US deal that is expected to see the local US-backed Kurdish militia pull out of the area, the head of the local military council said Thursday.

If the patrols are only on the front lines, we don't have a problem with that. But not inside the town

The comments by the head of the Manbij Military Council, who goes by the name Mohammed Abu Adel, came following his meeting with a US delegation to the town that included the commander of the US-backed anti-Islamic State coalition Maj. General James Jarrard and veteran Middle East diplomat William Roebuck.

Abu Adel said the delegation told his council that details of the US-Turkey deal are still being firmed up, and that they will keep the local council and the US-backed leadership in Manbij updated.

He said according to details discussed with the US delegation, joint US-Turkish patrols will only take place along already-delineated front lines between the strategic town and other Turkish-controlled areas to the west.

"If the patrols are only on the front lines, we don't have a problem with that," said Abu Adel. "But not inside the town." Ilham Ahmed, a senior Kurdish official, said the US delegation gave guarantees that no Turkish or Turkey-backed Syrian forces will enter Manbij. She didn't elaborate.

The US State Department declined to comment on the US delegation's conversations in Syria, other than to say that the Manbij deal would be carried out "based on the conditions on the ground in a phase by phase approach."

"Further details of that arrangement will be determined during the implementation process," the State Department said.

Other US officials familiar with the discussion said they didn't anticipate that Turkish troops would be regularly deployed in Manbij, although they stopped short of an explicit promise. They said the US was assuring the local military council that any such decisions would have to be agreed to be all parties, including the council. The officials agreed to discuss details of the private meeting only on condition of not being quoted by name. 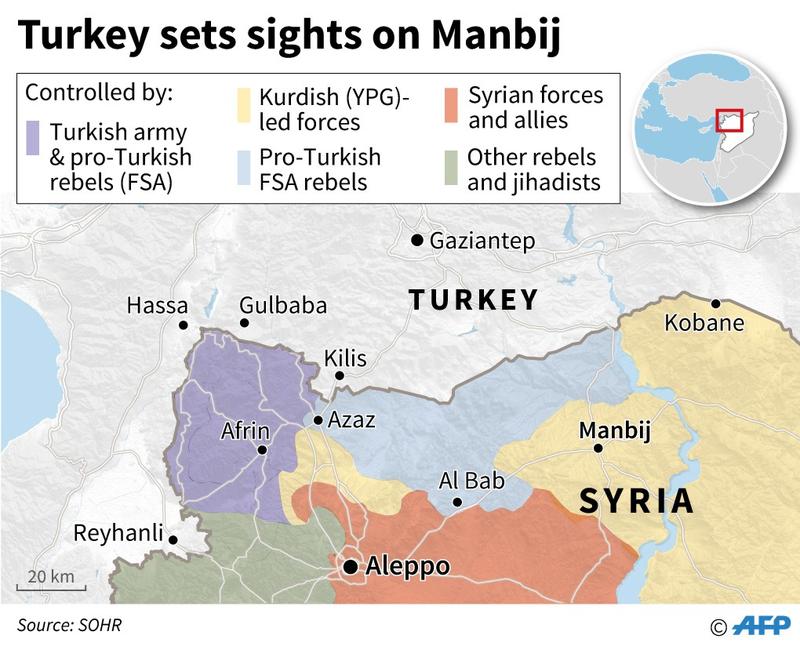 An AFP map showing forces on the ground in northern Syria. Turkey has threatened to launch an attack on Kurdish-held Manbij.

Abu Adel said the Turkey-backed Syrian forces will have no role in the town.

The delicate US-Turkey deal has been long in the making. It could ease tensions between Washington and Ankara, NATO allies whose relations have soured over their respective Syria policies. The deal could also force a realignment of troops along the volatile Syria-Turkey frontier, meeting a long-standing Turkish demand to push the Kurdish militia known as YPG east of the Euphrates River.

Abu Adel called the deal "political" and meant to deal with the balance of power in northern Syria but didn't elaborate. He said there will be no changes to the local military council he heads, suggesting that changes may come in the local civil administration.

Turkey considers the YPG a terror group tied to a Kurdish insurgency within Turkey's borders.

Soon after the deal's announcement, the YPG said it would pull its advisers out of Manbij.

Other details of the deal remain unclear. The US and Turkey offered differing descriptions of what the deal entailed, how it would be carried out and when.

Turkish officials suggested a plan had been hashed out in which the withdrawal would be complete within six months, with Kurdish fighters giving up their weapons as they leave Manbij. A Turkish official said Turkey would review the withdrawal before a new council is set up to administer the multiethnic town, which has been run by the Manbij Military Council and an affiliated civil administration since 2016.

US officials wouldn't discuss whether the Kurdish troops would have to give up their weapons and insisted the plan included only "estimated timelines" based on events on the ground and no hard deadlines. US officials said joint US-Turkish patrols will be dispatched along a pre-existing demarcation line around Manbij in a trust-building exercise to pave the way for a withdrawal.

Asked if his council has made any demands in the talks between the Americans and the Turks, Abu Adel said: "We are all right. We want nothing and if we are left alone, we will be all right."