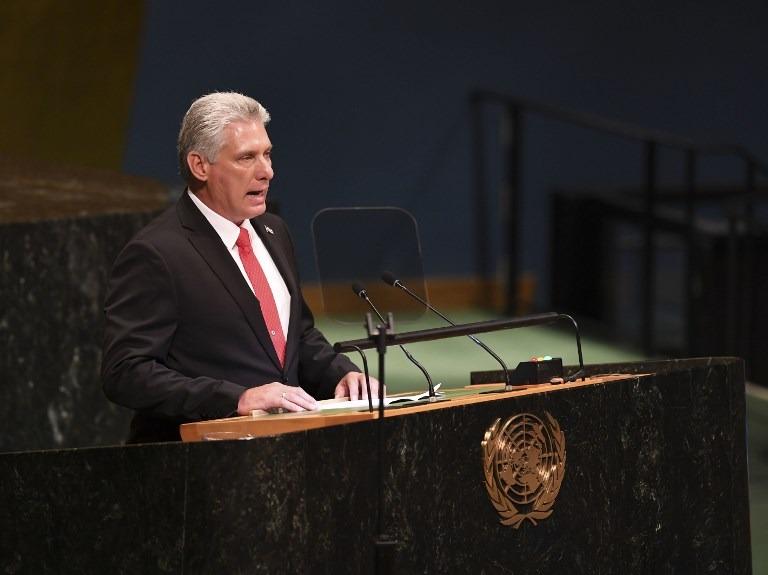 Miguel Diaz-Canel, President of Cuba, speaks to the Nelson Mandela Peace Summit Sept 24, 2018 a day before the start of the General Debate of the 73rd session of the General Assembly at the United Nations in New York. (DON EMMERT / AFP)

HAVANA - The upcoming visit to China by Cuban President Miguel Diaz-Canel represents a new starting point for China-Cuba friendly relations in the new era and will encourage the two peoples to work on a new chapter in their friendship, Chinese Ambassador to Cuba Chen Xi told Xinhua.

At the invitation of Chinese President Xi Jinping, Diaz-Canel, who was elected as president of the Council of State and chairman of the Council of Ministers in April by Cuba's National Assembly of People's Power, will pay a state visit to China, during which he will attend the first China International Import Expo in Shanghai.

Diaz-Canel's visit to China, which will take place not long after he took office, "fully demonstrates the sincere will of the Cuban side to develop relations with China, and the firm determination of the new generation of Cuban leaders to inherit and deepen the friendship between China and Cuba," Chen said.

Cuba is the only socialist country in the western hemisphere and the first Latin American and Caribbean country to establish diplomatic relations with the People's Republic of China, Chen said.

Since the establishment of diplomatic relations more than half a century ago, no matter how the international situation has changed, the two countries and their peoples have always understood and helped each other and forged deep comradely and brotherly relations, he recalled.

In recent years, the frequent high-level exchanges between China and Cuba have generated a strong momentum for the development of bilateral ties.

Political mutual trust between the two countries has been continuously strengthened, practical cooperation has been expanding day by day, cultural and people-to-people exchanges have been rich and colorful, and bilateral relations have made further progress in the new era.

The Chinese and Cuban economies are highly complementary, Chen said, adding that China-Cuba economic and trade cooperation has a long history, enjoys great potential and has expanded at a rapid pace.

China has become Cuba's second largest trading partner, and Cuba is currently China's first largest trading partner in the Caribbean area. The investment cooperation between the two sides has also steadily progressed, with Chinese enterprises actively participating in cooperation with Cuba in such fields as new energy, bio-pharmaceutical manufacturing, information and communications, and infrastructure construction.

As Cuba's Mariel Special Development Zone continues to expand and its business environment is becoming more mature, Chinese enterprises are getting more interested in cooperation with the zone, and the negotiations on related joint venture projects are making positive progress, the Chinese ambassador said.

As China and Latin American countries have reached broad consensus on jointly building the Belt and Road, Chen said, China and Cuba are facing new opportunities and enjoying broad development space in innovating cooperation models, expanding cooperation fields and making use of their complementary advantages.

In the next stage, China will work with Cuba to promote the sustained and in-depth development of economic and trade cooperation between the two countries on the basis of mutual respect and mutual benefit.

Recent years also witnessed fruitful and colorful cultural exchanges between China and Cuba, Chen said, citing China's participation in this year's Havana International Book Fair as the guest of honor, the photo exhibition on the Belt and Road in Cuba in September, and the Cuban National Ballet's visits to China.

Meanwhile, he said, biological science and technology projects such as the China-Cuba Center for Molecular Immunology and the Joint Laboratory are being implemented in an orderly way.

China is willing to work together with Cuba to push their special friendship as "good friends, good comrades and good brothers" to a new level in accordance with the important consensus reached earlier by the leaders of the two countries, Chen said.