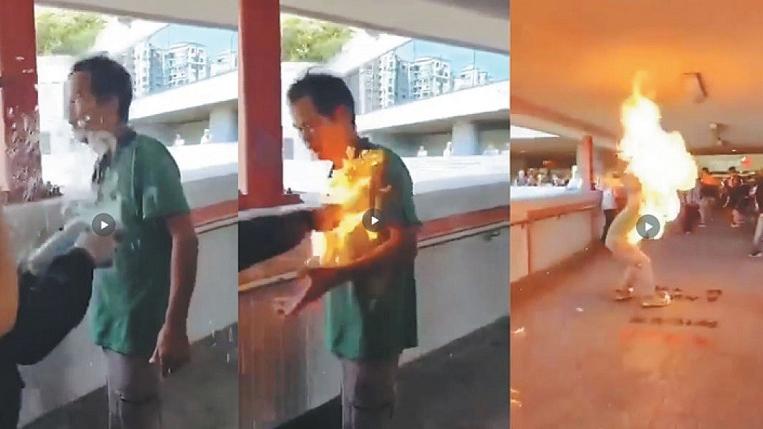 Blackclad rioters set a man on fire on Monday in one of the most horrifying incidents since violent protests broke out more than five months ago.

According to a viral video, a man in a green shirt was ignited by a radical protester as he poured what's believed to be inflammable liquid on the victim who had altercated with several masked rioters on a footbridge in Ma On Shan in the New Territories.

During the argument, the man had asked the protesters if they know their Chinese identities, according to the video.

If there's still any wishful thinking that by escalating the violence, the Hong Kong Special Administrative Region government will yield to pressure to satisfy their so-called political demands, I'm making this statement loud and clear here: It will not happen

The victim suffered severe burns on his body and was listed in critical condition in a hospital. The assailant is believed to have fled after the attack.

The victim had been seen trying to stop protesters from vandalizing an MTR station, another video showed.

At a news conference Monday afternoon, the police condemned the attack as "inhumane".

A police spokesperson said the attacker had "no regard for the lives of others for the sake of his political stance".

Police have classified the case as attempted murder and said active investigations by the Commercial Crime Bureau were underway. As of 10 pm on Monday, no one had yet been arrested.

Speaking to the media on Monday evening, Chief Executive Carrie Lam Cheng Yuet-ngor reiterated that the government will not yield to the violence of rioters and accede to their demands. "They will never succeed," she said.

"If there's still any wishful thinking that by escalating the violence, the Hong Kong Special Administrative Region government will yield to pressure to satisfy their so-called political demands, I'm making this statement loud and clear here: It will not happen," Lam said.

Protesters also hurled gasoline bombs and started fires at various MTR stations. Some of them flung two gasoline bombs into a train carriage full of passengers at Kwai Fong Station.

Up to 32 metro stations were forced to shut down temporarily, and several metro lines suspended services, according to MTR Corp.

Condemning the illegal acts, the rail operator called the rioters' behavior "absolutely unacceptable", considering the grave threat posed to the safety of passengers and MTR staff.

The violence persisted after dark, as rioters continued prowling the streets in multiple districts. Residents in Mong Kok bore the brunt of their ire as a fire rioters started on the busy Argyle Street belched black smoke as high as 5 meters. They also roughed up a passerby, accusing him of filming their acts.

A minivan in Tseung Kwan O was engulfed by flames after radical protesters set it on fire to punish the driver for removing the barricades.

Due to the renewed violence, nearly all universities in Hong Kong suspended classes on Monday. The vice-chancellor of the University of Hong Kong confirmed in a statement on Monday night that five HKU students were arrested that day.