UN: Rohingya in Bangladesh in 'most acute' situation 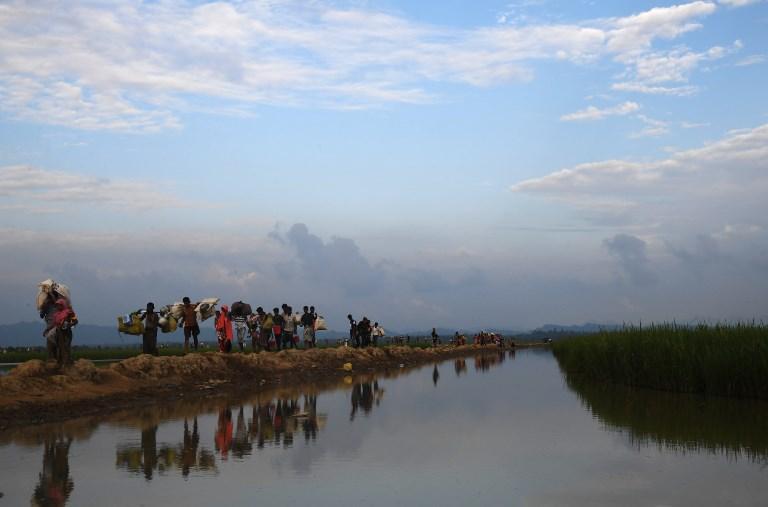 Rohingya Muslim refugees who were stranded after leaving Myanmar walk towards the Balukhali refugee camp after crossing the border in Bangladesh's Ukhia district on Nov 2, 2017. More than 600,000 Rohingya have arrived in Bangladesh since a military crackdown in Myanmar in August triggered an exodus, straining resources in the impoverished country. (DIBYANGSHU SARKAR / AFP)

UNITED NATIONS - More than 800,000 Myanmar Rohingya were probably in the "most acute" situation, UN High Commissioner for Refugees (UNHCR) Filippo Grandi told the UN Security Council on Thursday.
Grandi made the remarks about Rohingya refugees, as in comparison to 65 million to 66 million people forcibly displaced in the world. "We spoke about some of the most complex crisis in Africa especially South Sudan, the Democratic Republic of Congo," he said to reporters outside the council's chambers.
"There was much focus on the situation in Bangladesh - Rohingya refugees coming from Myanmar - and the way forward in that crisis which is probably the most acute at the moment," he said.

Of those 800,000 refugees, UN officials said 607,000 fled violence in northern Rakhine State since Aug 25 when Rohingya rebels allegedly staged deadly attacks against security posts, triggering retributions from government forces and civilian vigilantes. Villages were torched and villagers fled in face of deadly violence.
Access to northern Rakhine State - one of the least developed in Myanmar - has been tightly restricted, although a senior UN official flew over part of the terrorized area last month and reported seeing burnt-out villages.
"There was support for the role the UNHCR can play in facilitating discussion on voluntary safe and dignified return if and when conditions are created in Rakhine State for this to happen," the head of the UN Refugee Agency said. "We spoke about important overlaps of the agenda of my office ... and the agenda of the Security Council."
He explained that since refugees are a humanitarian issue they are discussed within UNHCR as "a non-political manner," but it is an

issue which overlaps with the peace and security agenda of the Security Council. So, solutions for refugee problems "are essentially political."
The problem is for the Rohingya refugees to "safely and in a dignified manner go back home," Grandi said. Thursday's Security Council session "was an opportunity to exchange views on all these matters, both policy issues and operational issues."
The Rohingya face an additional problem since they are legally stateless. Myanmar has not recognized most of the ethnic Muslims as citizens, even after many had been living for decades in Myanmar, an overwhelmingly Buddhist nation.
"You need to address the very complex issue of citizenship," Grandi said. "Without that no return will be sustainable. I don't know if even any return could happen in any significant number if that issue is not unblocked."
"These - as we often say - are not just refugees, these are stateless refugees," he said. "So this is a complex issue."
The high commissioner said he met with Nobel Laureate Aung San Suu Kyi, the State Counselor, when he was in Myanmar in July.
"I offered also our expertise as a statelessness agency to examine how this can be addressed," Grandi said.
"We have seen statements by the government of Myanmar, by the state counselor, who was yesterday (Wednesday) in Rakhine herself," he said. "We have seen statements saying that refugees can go back; we have seen also a set of conditions that have been put for this return to happen but we are not privy to the details of the discussion between the two governments (of Myanmar and Bangladesh)."
"We know that a working group has been established to follow up on those modalities and what I have told the council today (Thursday) is that UNHCR remains available to provide support, advice, expertise to this process as we have done in the past," the high commissioner said. "On the positive side, two days ago we were invited by the government of Myanmar to attend a workshop to discuss this matter, a bilateral workshop between UNHCR and the government of Myanmar."
"I hope that it will evolve in a more structured cooperation," Grandi said. "I try not to be pessimistic."